Convictions of women for “crimes against nature” have been exceedingly rare in our nation’s history. But in 1967, the Louisiana Supreme Court upheld two such cases.

Mary Young and Dawn DeBlanc were sex workers.  In 1966, a police officer arranged a rendezvous in a phone call with DeBlanc. As they settled on a price for services rendered, DeBlanc mentioned that sometimes she and Young “gave a show” for an additional charge. The officer arrived at the motel, and the show was underway when other officers came in and arrested Young and DeBlanc. In a particularly humiliation, police photographed the two in their present state of undress. They also found a comic book in one of the girls’ purses which they labeled obscene.

Young’s and DeBlanc’s legal problems were apparently compounded by a thoroughly ineffective defense attorney. He raised objections to the introduction of evidence without ever stating a legal ground for his objections. And he failed to follow basic court procedures when he tried to bring a police report into evidence.

But it wasn’t all on the attorney. When Judge Frank Shea gave his instructions to the jury, he refused to ask it to consider the law against entrapment. The jury returned a guilty verdict, and Shea sentenced Young and DeBlanc to thirty months in the Orleans Parish prison.

Young and DeBlanc appealed the case to the Louisiana Supreme Court. Among the grounds was the argument that “unnatural carnal copulation” was too vague. The Court disagreed, and ruled:

The statute, of course, requires proof of an “unnatural carnal copulation.” As pointed out by this court … this phrase simply means “any and all carnal copulation or sexual joining and coition that is devious and abnormal because it is contrary to the natural traits and/or instincts intended by nature, and therefore does not conform to the order ordained by nature.’ The record discloses that officers who were in the motel room and witnessed the acts which formed the basis of the charge testified that there was oral copulation by and between both of the accused, and these witnesses described in detail the acts showing the unnatural carnal copulation. Since there is some evidence of this essential element of the crime, there is nothing for this court to review

Headlines for Jan 16, 1967: Syria and Israel exchange gunfire on the Sea of Galilee, threatening war at any moment. U.N. General Secretary U Thant urges both governments to avoid war. Lurleen Wallace, wife of Alabama Gov. George Wallace, is sworn in as a proxy for her term-limited husband. Midwest and upper Plains are paralyzed by a blizzard. A massive blaze destroys Chicago’s six-year-old McCormick Place Exposition Center, dealing the city a terrible economic blow. New York City hospitals admit conducting  unauthorized experiments on patients. 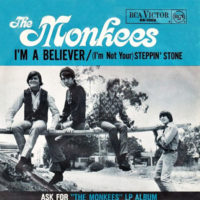 On the radio: “I’m a Believer” by the Monkees, “Snoopy vs. the Red Baron” by the Royal Guardsmen, “Tell It Like It Is” by Aaron Neville, “Good Thing” by Paul Revere and the Raiders (feat. Mark Lindsay), “Words of Love” by the Mamas and the Papas, “Standing In the Shadows of Love” by the Four Tops, “Georgy Girl” by the Seekers, “Sugar Town” by Nancy Sinatra, “Nashville Cats” by the Lovin’ Spoonful, “Tell It To the Moon” by the Four Seasons.

New York Times best sellers: Fiction: The Secret of Santa Vittoria by Robert Crichton, Capable of Honor by Allen Drury. Non-fiction: Everything but Money by Sam Levenson, Rush to Judgment by Mark Lane.