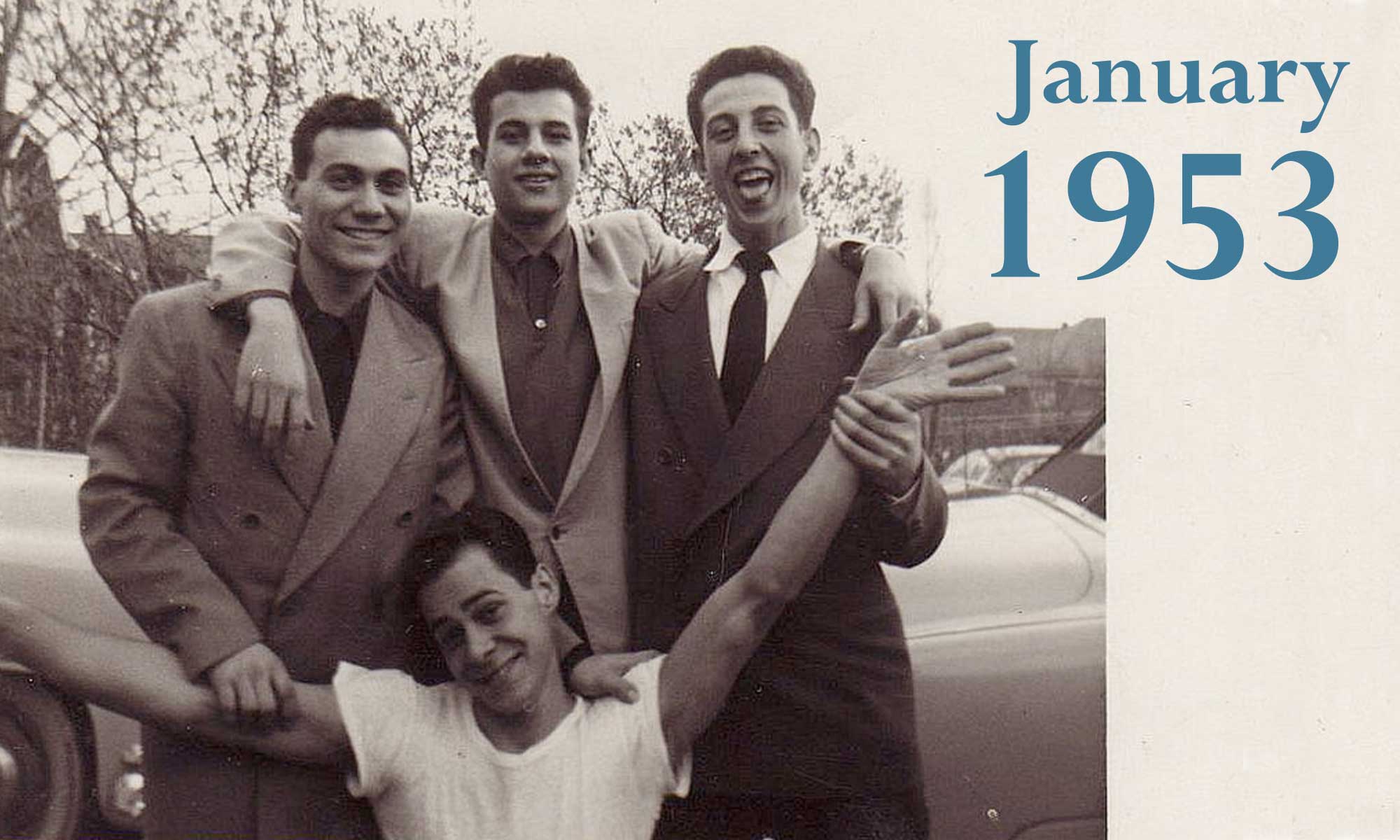 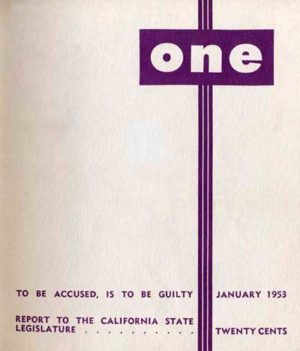 January: The first issue of ONE is published. ONE is the first nationally-distributed gay rights magazine in the U.S. The first issue is small (almost square; 6 inches by 7), with a plain cover and 24 pages. The first article was a translation from the German homophile publication Die Insel, a poem by Helen Ito (possibly a pseudonym), another bit of fiction by Elizabeth Lalo (also probably a pseudonym), a report by psychiatrist Karl Bowman on efforts by the state of California to find a cure for homosexuality (he was doubtful), and a report by Dale Jennings, titled “To Be Accused Is To Be Guilty,” recounting his success in beating the charges when he was entrapped for allegedly inviting a police officer to his home for “immoral purposes.” There’s another article describing the Mattachine Society’s founding in 1950, written by “Hieronymous K. (Dale Jennings, who was a co-founder, but uses a pseudonym here in keeping with the Society’s policy of anonymity). There’s a news roundup, an editorial by Geraldine Jackson (Betty Perdue), brief book reviews, and a summary of California’s entrapment law. ONE will appear in newsstands and in a few brave subscribers’ mailboxes for the next fourteen years, more or less, with occasional interruptions.

Jan 3: The 83rd Congress convenes with Republicans holding a slim majority in both houses. In the House, Rep. Joseph W. Martin, Jr., (R-MA) takes over as Speaker from Rep. Sam Rayburn (D-TX). The new Senate Majority Leader is Sen. Robert Taft (R-OH). Sen. Lyndon B. Johnson (D-TX) is elected Minority Leader. Sen. Joseph McCarthy (R-WI) takes over as chairman of the Senate’s Permanent Investigating Committee and says he will investigate the educational system in the search for alleged subversives. Rep. Harold Veld (R-IL), who takes over the House Un-American Activities Committee, says he will conduct a similar investigation. In addition, the Senate Internal Security subcommittee, which Sen. Pat McCarran (D-NV) had headed, will now be given to Sen. Homer Ferguson (R-MI), another McCarthy ally. 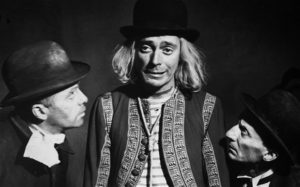 Jan 5: Samuel Beckett’s play Waiting for Godot has its first public stage première, in French, as En attendant Godot at the Théâtre de Babylone in Paris.

Jan 7: President Truman sends his final State of the Union Message to Congress. The written message, read aloud by clerks of both Houses of Congress, announces that the U.S. has developed the hydrogen bomb. “Recently, in the thermonuclear tests at Eniwetok, we have entered another stage in the world-shaking development of atomic energy,” the message reads. “From now on, man moves into a new era of destructive power, capable of creating explosions of a new order of magnitude dwarfing the mushroom clouds of Hiroshima and Nagasaki. … The war of the future would be one in which man could extinguish millions of lives at one blow, demolish the great cities of the world, wipe out the cultural achievements of the past — and destroy the very structure of a civilization that has been slowly and painfully built up through hundreds of generations. Such a war is not a possible police for rational men. we know this, but we dare not assume that others would not yield to the temptation science is now placing in their hands.”

Jan 7: An Army-chartered Curtis C-46 transport plane, carrying thirty-seven service members on their way home from Korea, crashes in the Wasatch Mountains on the Utah-Idaho border northeast of Logan, Utah. All forty board, including three crew members are killed. A snow storm delays the search, and the burned out fuselage will be spotted during an arial search on Monday.

Jan 8: Iran’s Prime Minister Mohammed Mossadegh demands a year’s extension of his special dictatorial powers, which are due to expire soon. The demand sends the Majlis into an uproar, and draws sharp rebukes from two of his most powerful allies. Deputy Premier Hussein Makki, Mossadegh’s longtime right-hand man, resigns. The house speaker, Ayatollah Abol-ghasem Kashani, denounces the proposal and threatens to resign.

Jan 9: The Supreme Court of the British colony of Aden (later to become part of Yemen), rules for the British-owned Anglo-Iranian Oil Company in its claim of ownership of a cargo of 900 tons of Iranian oil in the Italian-chartered tanker Rose Mary. The tanker had been impounded in Aden the previous June after it tried to leave the Persian Gulf with oil from the nationalized Abadan refinery. The court agrees with AIOC that because it has not been compensated by Iran for its nationalized property, AIOC retains ownership of the oil. AIOC warns that it will take legal action against overseas buyers of Iranian oil, which it contends is stolen property. 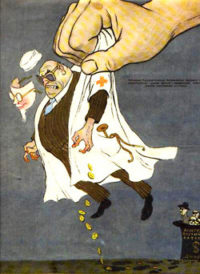 Jan 13: The Soviet official mouthpiece Pravda publishes an article charging the country’s most prestigious doctors, most of them Jews, with plotting to poison Soviet political and military leaders. Pravda says that nine “terrorist Jewish doctors” were arrested. They were, according to the Soviet press, “recruited by a branch-office of American intelligence — the international Jewish bourgeois-nationalist organization called ‘Joint.’ The filthy face of this Zionist spy organization, covering up their vicious actions under the mask of charity, is now completely revealed.” The doctors allegedly killed Politburo member Andrei Z. Zhdanov in 1948, and Army political administrator Alexander S. Scherbakov in 1945. 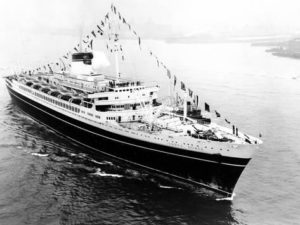 Jan 14-23: The Italian liner Andrea Dorea makes its maiden voyage from Genoa to New York City. The ship, the pride of a war-torn and impoverished nation, it is neither the largest vessel nor the fastest of its day. But it is the most luxurious. Each class, even the third tourist class, has its own separate dining room, lounges, and social halls, designated areas of open deck space and enclosed promenades, and even its own outdoor swimming pool with veranda (class segregation is still the rule). Its maiden voyage is marred by severe storms as it approaches New York, during which the ship experiences a 28-degree list. Yet the Andrea Dorea arrives just a few minutes behind schedule amid great fanfare.

Jan 14: New York city lifts its ban on fire and police sirens, which have been silenced since 1950 to avoid confusion with air-raid sirens. The ban remains in place for ambulances and radio and television programs.

Jan 15: The Fox West Coast Theaters chain postpones indefinitely the showing of Charlie Chaplin’s newest film Limelight. The postponement is ordered following last month’s picketing by the American Legion of the West Coast premiere of Moulin Rouge at the Fox Wilshire Theater. Those pickets targeted the film’s director John Houston and star José Ferrer, both of whom appeared before the House Un-American Activities Committee to answer charges that they were Communist or Communist sympathizers. The theater chain asks United Artists to withhold the release of Limelight until the Justice Department can investigate claims that Chaplin is a Communist or a sympathizer. “A spokesman says that the theater chain doesn’t want to be ‘guinea pigs’ in testing public reaction to the Chaplin movie.” 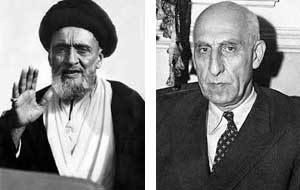 Jan 19: Iran’s Majlis votes overwhelmingly to extend Prime Minister Mohammed Mossadegh’s virtual dictatorial powers for one full year. The vote comes after a threats by speaker Ayatollah Abol-ghasem Kashani to prevent a vote from taking place. But after more than a week of street demonstrations and behind-the-scenes haggling, it becomes clear that Kashani, while powerful, does not have the support to challenge Mossadegh. Kashani backs down, and with a crowd outside chanting “Mossadegh or Death!” — the Majlis extends Mossadegh’s powers in a 59-1 vote. Mossadegh can continue to rule by decree, but the Majlis can still meet and pass legislation on its own as well. Kashani says he will continue to oppose Mossadegh’s powers. In a note to Mossadegh, Kashani warns, “You will be sorry one day when regrets will be useless.” 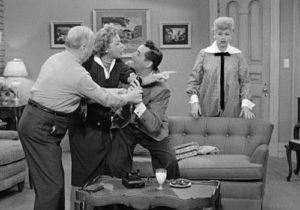 Jan 19: For an long-awaited episode of I Love Lucy, an estimated 71% of all television sets are tuned in to see Lucy give birth to Little Ricky. More people watch this episode than will watch Dwight D. Eisenhower’s presidential inauguration the next day. 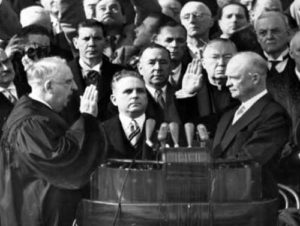 Jan 20: An inaugural crowd estimated at 750,000 people witness Gen. Dwight D. Eisenhower being sworn in as the 34th President of the United States. Over the next couple of days, Eisenhower’s cabinet will be confirmed by the Senate and sworn in. Eisenhower’s cabinet will consist mostly of powerful businessmen. The exception is the Secretary of Labor, Martin P. Durkin, a Democrat and former president of the AFL’s plumbers’ and pipefitters’ union. The Cabinet will be dubbed “Nine Millionaires and a Plumber.” 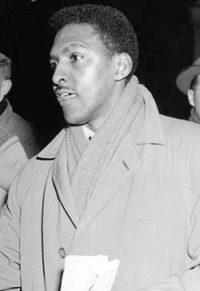 Jan 21: Civil rights activist Bayard Rustin is arrested in Pasadena on a morals charge. He had spoken to the American Association of University Women at the Pasadena Athletic Club the night before, and was scheduled to speak this evening at the Pasadena First Methodist Church. Instead, Rustin is taken into custody with two other men on suspicion of “lewd vagrancy,” a charge that was broadened by a California court in 1951. The three were parked in a car just a few blocks away from the church. He will plead guilty the next day, and the judge will sentence him to sixty days in jail. The conviction will be used to try to discredit him ten years later when he plays a key role in organizing Martin Luther King, Jr.’s March on Washington. 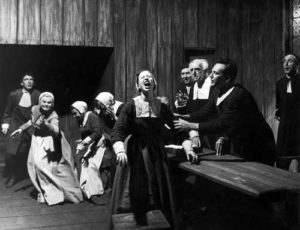 Jan 22: Arthur Miller’s drama The Crucible opens at the Martin Beck Theatre on Broadway. While the play dramatizes the Salem Witch Trials, it is widely seen as an allegory for McCarthyism. Miller will see himself blacklisted and his passport revoked. He will be called before the House Committee on Un-American Activities in 1956 when he will be convicted of contempt of Congress for refusing to name names.

Jan 22: The Senate authorizes a budget of $200,000 ($1.9 million today) for Sen. Joseph McCarthy’s (R-WI) Senate Investigations subcommittee. This figure is double the amount authorized for the same committee last year. 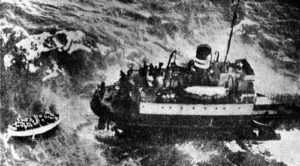 Jan 31-Feb 1: The North Sea flood of 1953 kills 1,836 people in the Netherlands, 307 in the United Kingdom, and several hundred more at sea, including 133 on the ferry MV Princess Victoria in the Irish Sea.