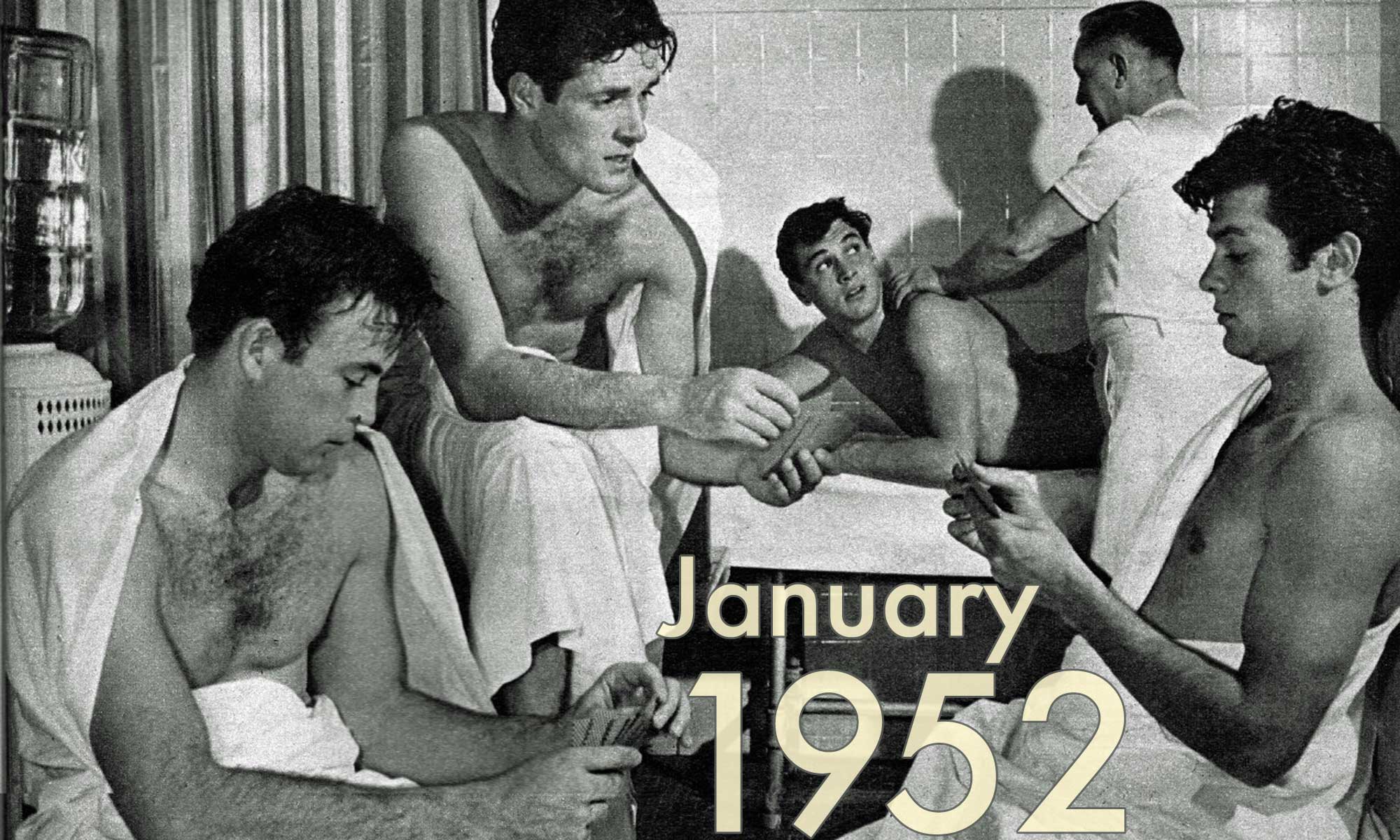 Jan 1: Student nationalist guerrillas from Fouad el Awal University in Cairo engage in a series of attacks on British posts in the Suez Canal Zone. The clashes begin shortly after midnight and run for the next four and a half hours in several locations around Ismailia. Meanwhile in Cairo, Britain’s Ambassador lodges a former protest with the Egyptian government against the extremist newspaper Al Gamhour Al Misri, which offered a ￡1,000 reward (about ￡27,500 today) for anyone who kills Lt. Gen. Sir George Erksine, British commander in the canal zone.

Jan 2: President Truman orders a sweeping reorganization of the scandal-plagued Bureau of Internal Revenue. Sixty-four Internal Revenue collectors, all of them presidential political appointees, will be replaced with twenty-five district commissioners who will be hired through Civil Service Commission procedures. The plan also provides for an inspection office that will operate independently from the rest of the bureau. Internal Revenue Commissioner John B. Dunlap discloses that 166 tax agency employees have been fired or forced to resign in 1951 over bribery and other irregularities in tax collections and enforcement. 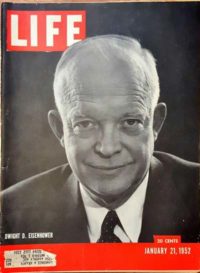 Jan 7: Gen. Dwight D. Eisenhower says that he would accept the Republican nomination for the presidency if he were drafted at next July’s national convention. Speaking from his post as NATO commander in Europe, Eisenhower adds that he is not actively running for office, and therefore will not campaign or participate in any pre-convention activities. But he says that his obligation, in the event he were nominated, “would transcend my present responsibility” as Supreme Allied Commander in Europe. This is the first time Eisenhower publicly reveals his political leanings as a Republican. Meanwhile, Sen. Henry Cabot Lodge, ,Jr., (R-MA) says he will enter Eisenhower’s name for the New Hampshire primary.

Jan 7: Communist delegates in Panmunjon abruptly halt truce discussions. The Communist delegation accuses the U.N. of a lack of sincerity in carrying out negotiations on armistice provisions designed to prevent the North from rebuilding its air bases.

Jan 8: Pennsylvania enacts a sexual psychopath law. The Barr-Walker Act is the product of a sex-crime panic emanating from several high-profile murders in Pittsburgh. It is intended to provide “the better administration of justice and the more efficient punishment, treatment and rehabilitation of persons convicted of the crime of indecent assault, incest, assault with intent to commit sodomy, solicitation to commit sodomy, sodomy, assault with intent to ravish or rape, if the court is of the opinion that any such person, if at large, constitutes a threat of bodily harm to members of the public, or is an habitual offender.” Following a psychiatric examination, a person convicted under the statute may be confined to a psychiatric institution indefinitely. The individual has no right to challenge the psychiatric examination in court.

Jan 10: Cecil B. DeMille’s circus epic The Greatest Show on Earth premieres at Radio City Music Hall in New York City. The film stars Betty Hutton, Cornel Wilde, Charlton Heston, James Stewart, and Dorothy Lamour. It will be the highest-grossing film in the U.S. for the year. 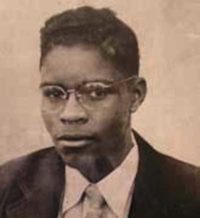 Jan 12: The University of Tennessee in Knoxville admits its first African-American student when Gene Mitchell Gray, 23, enrolls in the university’s graduate biochemistry program. The University of Tennessee trustees had blocked his admission since 1950 despite a ruling by state Attorney General Roy Beeler in favor of Gray’s admission based on related U.S. Supreme Court rulings. A lengthy battle ensued in the courts. When the case reached the U.S. Supreme Court two days earlier, the university abruptly announced that it will admit Gray and three other African-American students. By doing so, the university avoids risking a broader desegregation ruling by the Court now that the case is moot. After Gray enrolls, Knoxville’s Arnold Hotel, where he works as a bellhop, shifts his schedule so that he would have to work during class hours, forcing him to quit. His mother steps in to help out financially, and she also loses her job. This forces Gray, married and a father of two, to pawn his wedding band and watch.

Jan 12: The Iranian Foreign Ministry announces that all fourteen British consulates in the country must close by Jan 21. This is the latest step in the controversy arising from Iran’s nationalization of the Anglo-Iranian Oil Company. 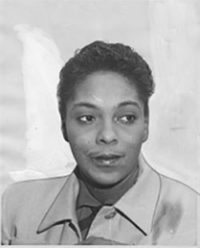 Jan 13: Washington, D.C. police raid a party to raise money for labor and civil rights activist Marie Richardson. She had been in indicted the previous December under the Smith Act for her activities with the National Negro Congress, American Youth Congress, Americans for Peace Mobilization and the Americans for Democratic Action along with, allegedly,  the Communist Party. Twelve police officers break up the party attended by about sixty people, seize a collection envelope containing $980 along with a list of contributors, and take names and addresses everyone there “in case witnesses were needed.” 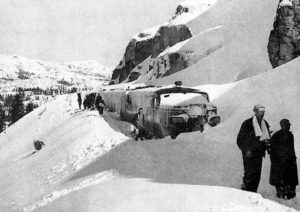 Jan 16: Rescuers reach 223 passengers and 33 crew members trapped on board a stranded “City of San Francisco” Streamliner. The Southern Pacific train is brought to a halt in heavy winter snows just west of Donner Pass, near Emigrant Gap, California. Passengers have been trapped for three days after the San Francisco-bound train is stopped by snowslides in the Sierras.

Jan 19: A Northwest Airlines chartered Douglas C-54 Skymaster airliner, carrying 40 military personnel returning home from Korea, crashes into Hecate Strait off the British Columbia coast. All of the passengers and crew escape from the craft, but thirty-six drown or die of exposure in the icy waters. Rowboats are able to rescue seven others. The plane crashes during an attempted emergency landing at Sand Spit, B.C. 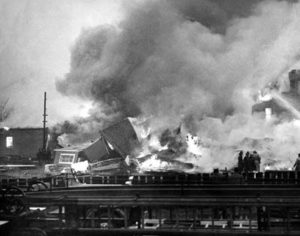 Jan 22: An American Airlines Convair 240 crashes in an Elizabeth, New Jersey, residential area while on approach to Newark Airport in heavy fog and rain. All twenty passengers and three crew members are killed, along with seven residents of three homes hit by the plane and set on fire. Among those passengers killed are former Secretary of War Robert P. Patterson. The plane narrowly misses Battin High School for Girls, which had dismissed for the day only 45 minutes earlier. This is the second in a string of crashes to hit Elizabeth in less than two months. On December 16, a Miami Airlines C-46 crashed into the Elizabeth River shortly after takeoff, killing thirty-one. Angry residents demand that Newark Airport be moved or permanently closed. 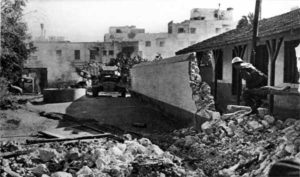 Jan 25: British soldiers launch an early morning raid to disarm Egyptian auxiliary police in Ismailia in the Suez Canal Zone. The British had accused the auxiliary police of either condoning or taking part in guerrilla activities in the Zone. The raid results in 42 members of the Egyptian force killed and 58 wounded. By the time fighting ends three hours later, three British soldiers are killed and 790 Egyptian police are in custody. 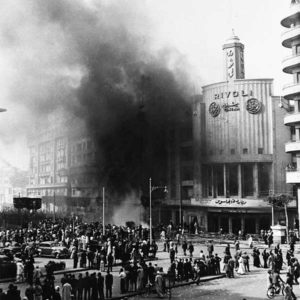 Jan 26: Rioting erupts in Cairo following the British assault on Ismailia. In what will become know as the Cairo Fire or Black Saturday, some 750 buildings are looted and burned, including the city’s Opera House. The fire spread from the Opera House to the world-famous Shepheard’s Hotel, a Barklays Bank, and several other shops, restaurants, bars, theaters, nightclubs, auto dealers, offices, and social clubs. Rioters especially single out British properties, but they also attack other businesses identified with Western culture. Twenty-six die, and about 550 are injured. The police are suspiciously absent, and order isn’t restored until the Army arrives on the streets shortly before sunset. The Cairo Fire marks the start of the Egyptian Revolution of 1952, six months of instability that will ultimately end with King Farouk’s overthrow.

Jan 27: King Farouk of Egypt fires the government of Premier Mustafa Nahas Passha because of his failure to maintain “security and order” in his confrontation with Britain. The king turns to Aly Maher Pasha, a former premier, to form a new government. This reinforces the opinion among ordinary Egyptians that Farouk is a British puppet.

Jan 28: American AIDS activist Bobbi Campbell is born (d. Aug 15, 1984). The public health nurse and early AIDS activist will become known as the “K.S. Poster Boy” when he poses for photos showing Kaposi’s sarcoma lesions. K.S. is a rare viral skin cancer that was one of many opportunistic infections that became a signifier for AIDS before the discovery of the Human Immunodeficiency Virus. Campbell will be the first to come out publicly as a person with AIDS and he will write a regular nationally-syndicated column about his experience for the San Francisco Sentinel.

Jan 30: The British Royal Family enjoy an evening out at the Theatre Royal, Drury Lane, where they see a performance of South Pacific. The royal party include King George VI, Queen Elizabeth, Princesses Elizabeth and her husband Prince Philip, and Princess Margaret. The family is celebrating one last night together before Elizabeth and Philip embark on a five-month tour the next day. Mary Martin, Wilbur Evans, Ray Walston, and producer Jerome Whyte are invited to the royal box at intermission. This is the first time King George VI has attended a public theatre performance since his operation in September.

Jan 31: Princess Elizabeth and Prince Philip board a BOAC Argonaut at London Airport (Heathrow) for the long-planned Australasian Tour. King George VI had planned to go on the five-month tour with stops at Gibraltar, Malta, Port Said (Suez Canal Zone), Aden, Colombo (Sri Lanka), the Cocos Islands, Australia and New Zealand. But due to the King’s operation in September, it was decided that Princess Elizabeth and her husband would undergo the tour instead. With the security situation still unsettled in Egypt, the Mediterranean and Egyptian stops are eliminated, and the new itinerary calls for the couple to fly directly to Kenya and pick up the tour from there. Despite the cold, the King and Queen Elizabeth go to the airport to see the couple off. This will be the last time King George VI is seen in public.