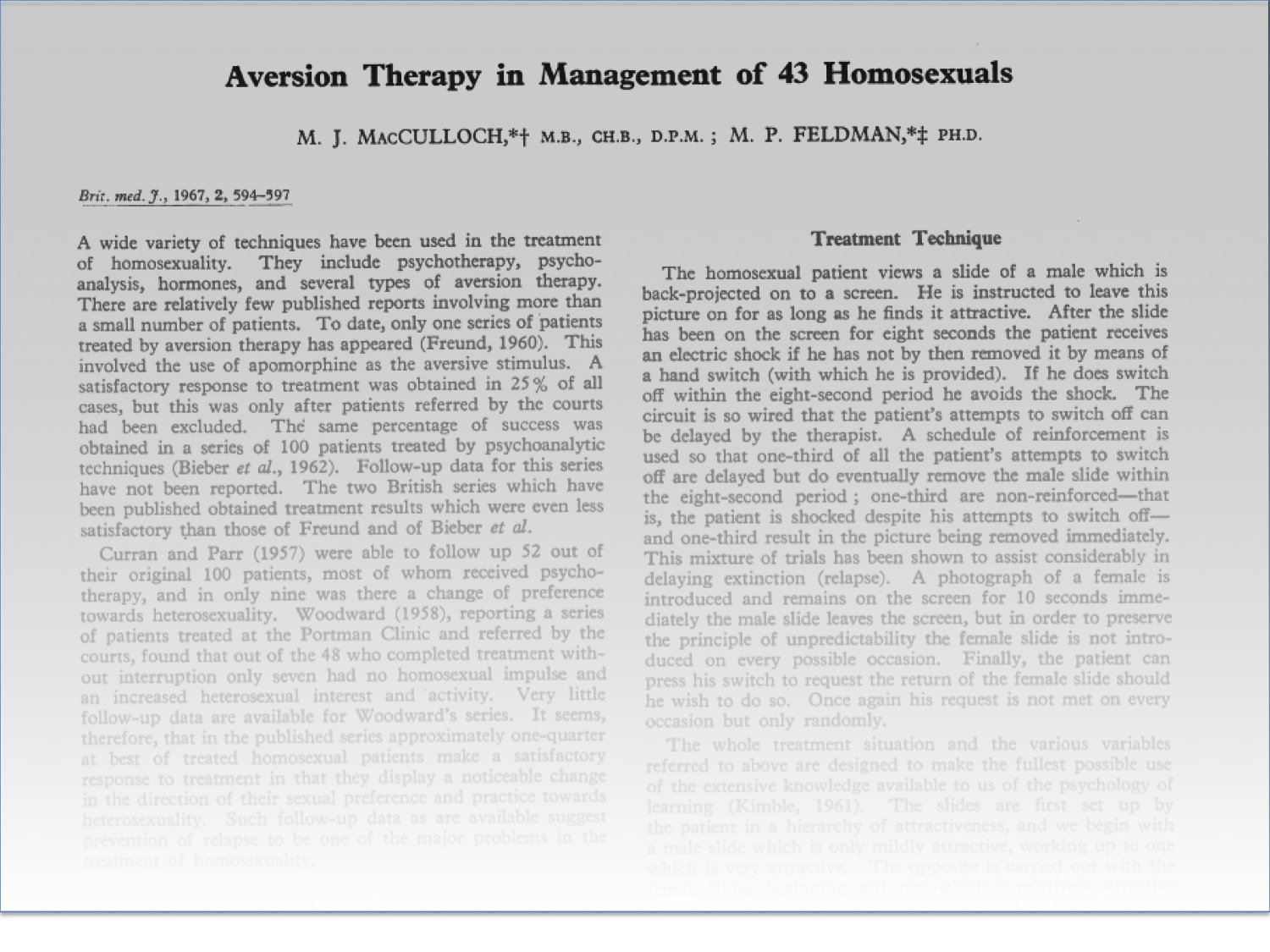 The prestigious British Medical Journal published an article under that title by Malclom J. MacCulloch and Maurice Philip Feldman in its June 3, 1967 issue. The authors reported the results of 41 men and two lesbians who they treated at Crumpsall Hospital in Manchester, U.K. The treatment consisted of administering painful electric shocks to the subjects whenever photos of attractive men (or women, in the case of the two lesbians) are shown on a screen. Five of the 43 subjects were between the ages of 15 and 20. Eighteen were under court order. Seven dropped out without completing the treatment, and 11 were “unimproved.” That left 25 who claimed that they were “improved” after twelve months. The “failures,” they said, tended to have a higher Kinsey rating — in other words, they didn’t have a basis in bisexuality to work with.

In our opinion the approximately 60% rate of improvement achieved in our series (over other reported studies) is mainly due to the use of an aversion therapy technique which has been carefully designed to make the most effective use of the findings of the experimental psychology of learning.

Ten years later, that 60% claim fell apart. Dr. Sheelah James and colleagues from Hollymoor Hospital in England tried to replicate the earlier study, and failed. Their “improvement rate” was only 31%. James’s problems began when more people dropped out of his study than what MacCulloch and Feldman reported. This led James to conclude that “the Feldman and MacCulloch group had undergone some clinical preselection before referral.” This alone would have inflated the earlier study’s “success” rate. James concluded that aversion therapy is “not a suitable treatment for a large percentages of homosexuals.”

By the early 1980s, aversion therapy was finally largely abandoned — not just for ethical reasons, but also because it simply didn’t work. But that doesn’t mean that aversion therapy’s critics thought curing gay people was such a bad idea. In 1978, James published another paper pushing hypnosis as a treatment. He claimed that five of his twenty patients became completely straight. and that three more were almost there. But those claims, too, soon fell by the wayside.

Headlines for June 3, 1967: A chartered DC-4 crashes in the Pyrenees, killing 83 British tourists. Tensions mount in the Middle East on on the eve of the Six-Day War. Racial rioting takes place in the Boston neighborhood of Roxbury. 99 U.S. Marines killed in clashes with the Viet Cong.

On the radio (UK): “Silence is Golden” by the Tremeloes, “Waterloo Sunset” by the Kinks, “Dedicated to the One I Love” by the Mamas and the Papas, “A Whiter Shade of Pale” by Procol Harum, “Then I kissed Her” by the Beach Boys, “The Wind Cries Mary” by the Jimi Hendrix Experience, “There Goes My Everything” by Engelbert Humperdinck, “The Happening” by the Supremes, “Pictures of Lily” by the Who, “Seven Drunken Nights” by the Dubliners.

M.J. MacCulloch and M.P. Feldman. “Aversion therapy in management of 43 homosexuals.” British Medical Journal 2, no. 5552 (June 3, 1967): 594-597. Available as a free downloaded from the National Library of Medicine at the National Institutes of Health.

Sheelah James, A. Orwin, R.K. Turner. “Treatment of homosexuality, I. Analysis of failure following a trial of anticipatory avoidance conditioning and the development of an alternative treatment system.” Behavior Therapy 8, no. 5 (November 1977): 840-848.