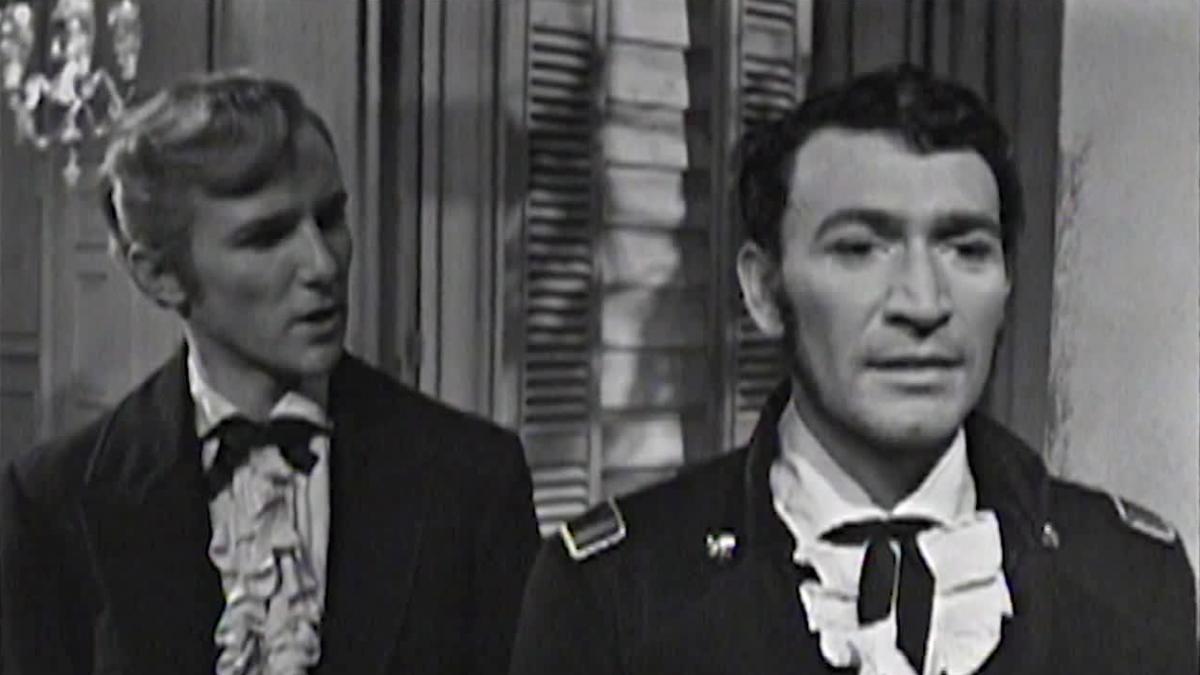 ITV’s Play of the Week, an ambitious ninety-minute weekly anthology series, aired some 500 plays from 1956 to 1966. Because the series started out as a live broadcast, hundreds of important television adaptations are now lost, including Look Back in Anger, Death of a Salesman, The Importance of Being Earnest, and The Skin of our Teeth. Another historic drama, Julien Green’s South, was also thought to have been lost. It’s very likely that when South aired live on November 24, 1959, that was the very first time anywhere in the world that a gay-themed drama appeared on television. Fortunately, a kinescope of South was recently rediscovered in the depths of the British Film Institute’s archives. Audiences were able to see it again for the first time fifty-seven years at the BFI’s 2016 Film Festival.

As its title suggests, South is set in the American South before the Civil War. Exiled Polish officer Lt. Jan Wicziewsky (played by Peter Wyngarde), is staying with a wealthy family on their plantation. The arrogant Wicziewsky softens when tall, blond and ruggedly handsome army officer Eric MacClure (played by Graydon Gould) arrives and throws Wicziewsky’s life into turmoil. The Guardian, on the occasion of the play’s rediscovery, described one scene:

There are some extremely moving scenes involving Wyngarde as Lieutenant Jan Wicziewsky, including one where he pours his heart out to the admittedly confused Jimmy, the young son of the plantation owner. “You know, Jimmy, odd times, freedom of will is a crushing weight and it’s not always possible to choose. I’m in love Jimmy, as no human being was ever in love before,” he says to the bewildered boy. “It’s better not to know what men are thinking, it’s almost always sad or shameful. I’m not ashamed, but I am alone. Hopelessly alone.”

The object of his love is MacClure, a handsome army officer played by Graydon Gould who has just arrived at the plantation. “By today’s standards it is all quite implicit, it is not explicit,” said (BFI curator Simon) McCallum. “But it is pretty extraordinary — it all builds up in this pressure cooker atmosphere with war clouds looming in the background.”

Peter Wyngarde showed special courage by taking on the role of Jan Wicziewsky. Most actors feared playing a gay character would be the kiss of death for their careers. Wyngarde had an additional concern: it was well known among fellow actors that Wyngarde was gay.

South has a particularly interesting history. Its impossibly handsome author, Julien Green, was himself gay. Born to American parents in Paris, he identified as a “Sudiste,” a Southerner, although he wrote mainly in French. Green translated his 1953 play Sud into English, and it was all set to be performed in London in 1955.

But there was one thing standing in the way: a peculiar quirk in English law left over from the early eighteenth century. The Theatres Act of 1737 gave the Lord Chamberlain of the Queen’s Household the absolute power to ban any play he deemed detrimental. Britain had a tradition of stage censorship dating back the 1545, but this 1737 Act was put in place specifically to protect Sir Robert Walpole, Britain’s first modern Prime Minister, from satirical attacks.

The Lord Chamberlain’s main duties is to oversee the ceremonial aspects of the Royal Household: garden parties, investitures, state dinners, weddings, funerals — things of that nature. Those were the things a Lord Chamberlain is hired to do, and the things he is most qualified for. Censuring plays was just a sideline, Lord Chamberlains were never hired for their literary knowledge. Furthermore, Lord Chamberlains are hired by the Sovereign — the King or Queen, as the case may be. Because he’s not employed by Parliament, he’s not answerable to it.

And there was another quirk. His powers of censorship extended nowhere else except to the public stage. It didn’t extend to radio, television, newspapers, books, or any other medium. He couldn’t even ban the book in which the play was printed. The public could freely read it, hear it performed on the radio, or watch it on television. They just couldn’t see it performed on the public stage.

From 1952 to 1963, Sir Lawrence Roger Lumley, 11th Earl of Scarboroug wielded this peculiar prerogative. He routinely banned any play that he deemed contrary to public morals, but he had a eccentric way of determining that. Plays that dealt with infidelity were granted performance licenses. Plays that mentioned homosexuality, even in passing, were banned. The Lord Chamberlain denied Tennessee Williams’s A Streetcar Named Desire a license  until it was edited to remove all mentions of homosexuality — and consequently all coherence — from the storyline. In one 1957 memo, the Lord Chamberlain tried to sort out what was acceptable:

We would not pass a play that was violently pro-homosexual. We would not allow “funny” innuendo or jokes on the subject. We will not allow embraces between males of practical demonstrations of love. We will allow the word “pansy”, but not the word “bugger”.

It’s worth repeating that the Lord Chamberlain’s powers extended only to the public stage. So to get around it, theatre clubs sprang up around London. A membership fee entitled members — and only members — to see plays in theaters not open to the public. And because these weren’t legally public performances, these theatre clubs could mount any production they desired.

One particularly successful club was the Arts Theatre Club, under the directorship of Campbell Williams. When the Lord Chamberlain refused a license for South, Williams brought it to the Arts Theatre Club to generally good reviews. The pamphlet advertising South to the club’s subscribers described it:

It is a play about extremes: North versus South, white man against coloured man, the old world of Europe in contrast to the new world of America, the difficulty that the sexually normal have in understanding the sexually abnormal. When the difference between two such contrasting elements becomes so great, and they lack toleration and understanding one for the other, then the setting is ripe for tragedy. Green takes as the theme of his play Aristotle’s definition of tragedy, “the purification of a dangerous passion by violent liberation.”

…although the Lord Chamberlain has refused to grant a license for public performance of this play, it is important to emphasise that it is not primarily about homosexuality; this topic is only a strand in Green’s tapestry.

Pretty soon, London theatre patrons discovered that the Arts Theatre Club, and others like it, could be counted on for decent quality productions of other banned plays like Tea and Sympathy, Cat on a Hot Tin Roof, and The Children’s Hour. But it was South that became synonymous with everything that was wrong with Britain’s censorship scheme.

The Move To Television

By the time ITV mounted its television production, the Lord Chamberlain had already eased his hard-line ban on homosexual themes. Plays could now mention homosexuality in passing without risking its performance license. Plays dealing more directly with homosexuality, as long as they were “serious and sincere” (read: tragic and critical), might also be allowed.

South may been able to get a performance license under these new guidelines. It was certainly serious, sincere and tragic. “So moved, so profound is (Wicziewsky’s) love for Eric MacClure that he forces a duel on him and allows himself to be killed rather than live without him,” a Stage reviewer described the plot.

South went on the air at 9:35. By the time it ended, the public television audience saw what the public stage had been prohibited from showing. Reviews were mostly positive — when they focused on the production itself. The Stage reviewer found ITV’s production “moving and poignant”:

Green’s dialogue was so full of compassion, understanding and tenderness that his subject didn’t seem distasteful and Mario Prizek, a new Canadian director, toned down his production so much that it kept perfect pace with the script. I wish I had ore space to write about this play, but needless to say Peter Wyngarde as Jan, the man who couldn’t talk of his live like other men, gave a stunningly brilliant performance, controlled and delicately pitched.

But reviewers who focused solely on the play’s theme weren’t so enamored. A Daily Sketch reviewer wrote:

I do NOT see anything attractive in the agonies and ecstasies of a pervert, especially in close-up in my sitting room. This is not prudishness. There are some indecencies in life that are best left covered up.

Viewers in the UK can see the entire production here. Unfortunately, the program is not available outside of the UK due to licensing restrictions.

The British Library’s English and Drama Blog has an entertaining history of the Lord Chamberlain’s censorship powers here. 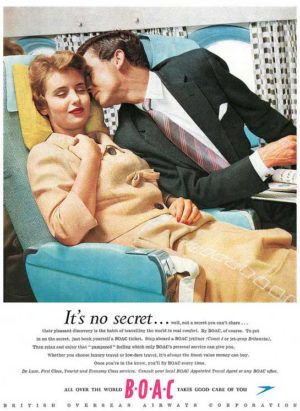 Headlines for November 24, 1959: Prince Philip arrives in the Dominion of Ghana for a seven-day tour. The 12-nation Antarctic Conference agreed to ban all nuclear detonations in the South Polar region. The sex nations of the Common Market (France, West Germany, Italy, Belgium, Holland and Luxembourg) agree to extend limited trading privileges to other Western countries. A TWA cargo plane crashes into a residential Chicago neighborhood shortly after takeoff from Midway field; Twelve are killed including nine in their homes. British Motor Corporation announces expanded production and £50 million in new factories. The German carmaker NSU announces the invention of a revolutionary new type of engine, called the rotary engine. 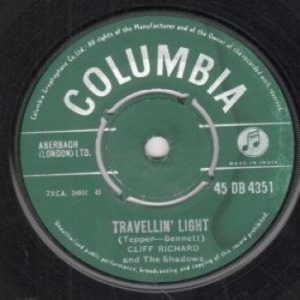 On the radio: “Travellin’ Light” by Cliff Richard and the Shadows, “Mack the Knife” by Bobby Darin, “What Do You Want to Make Those Eyes At Me For?” by Emile Ford and the Checkmates, “Red River Rock” by Johnny and the Hurricanes” “(‘Til) I Kissed You” by the Everly Brothers, “SEa of Love” by Marty Wilde, “Put Your Head on My Shoulder” by Paul Anka, “High Hopes” by Frank Sinatra, “The Three Bells” by the Browns, “Oh Carol” by Neil Sedaka.