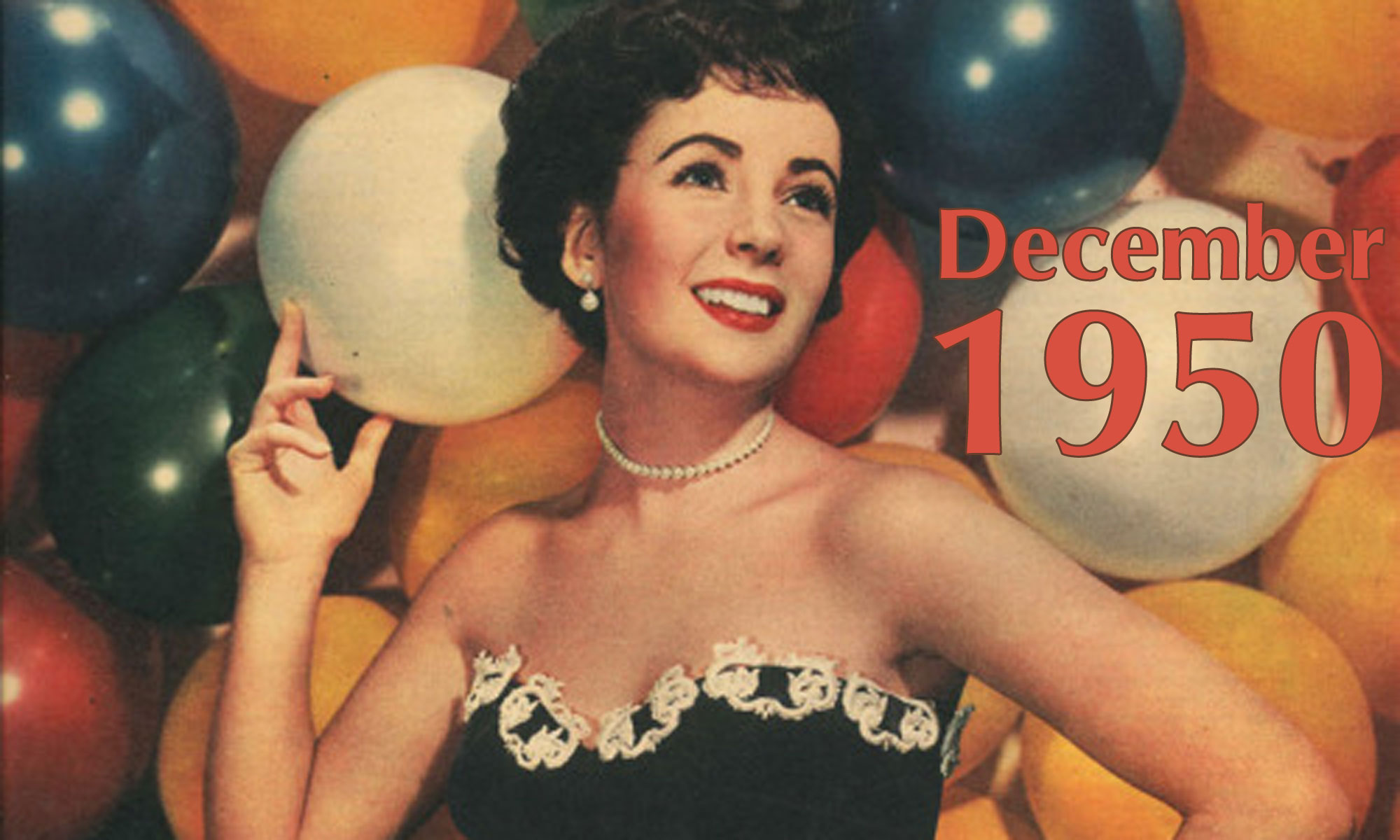 Dec 1: President Truman asks Congress for an additional $18 billion ($110 billion today) for a military buildup, including the development and production of additional nuclear weapons. He also signs an executive order establishing the Federal Civil Defense Administration. Its predecessor, the Office of Civilian Defense, had been abolished in 1945.

Dec 1: Gen. Douglas MacArthur, commander of U.S. and U.N. forces in Korea, publicly complains that orders forbidding him from bombing targets across the Korean border in China represent “an enormous handicap, without precedent in military history.” A reporter asks MacArthur is he thinks the use of nuclear weapons is warranted. MacArthur responds, “My comment would be inappropriate at this time.” He also issues a separate statement denouncing “irresponsible comments appearing in responsible sections of the European press” that are critical of the war. “I can only attribute this to a somewhat selfish though most short-sighted viewpoint.”

Dec 2: Gen. Douglas MacArthur issues a special statement from his headquarters in Tokyo. “A state of undeclared war between the Chinese Communists and the United States forces now exists.” He denies that he or his command has ever exceeded its authority, but “has acted in complete harmony and coordination with higher authorities.”

Dec 5: The last of the U.N. troops retreat from Pyongyang.

Dec 6: The Joint Chiefs of Staff issues a directive to Gen. MacArthur advising him to “exercise extreme caution” when making public statements. He is further ordered not speak to the press about military matters. 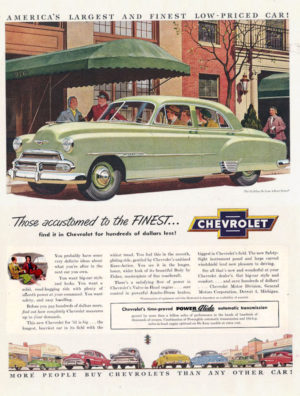 Dec 7: The Chevrolet Division of General Motors unveils its 1951 lineup, which will go on display in dealer showrooms on Saturday. Fourteen body types in the Styleline and Fleetline series will be available in two trim levels: special and deluxe. They all feature new front end styling, raised rear fenders, and combination stoplights and tail lights in a single assembly. The Styleline Deluxe convertible sports a clear plastic rear window for wider visibility. All cars feature the same six-cylinder engine delivering 92 horsepower from the previous model year, and a Powerglide automatic transmission remains optional on deluxe trim models for an extra $150 (about $1,540 today). Prices start at $1,593 ($16,350 today) for a two-door sedan and $1,640 (about $16,820 today) for a four-door. The top-of-the-line Styleline Deluxe Bel Air goes for $1,920 (about $19,700 today) and the convertible coupe sells for $2,026 (about $20,800 today). Production on the 1951 models began on November 21. 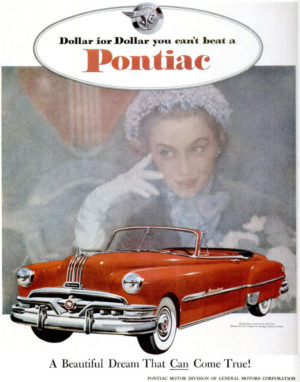 Dec 11: Dec 11: The new 1951 Pontiacs go on display in dealer showrooms across America, with special promotions celebrating the division’s 25th year. Styling changes for the Chieftain and Streamliner are mainly confined to a few tweaks here and there: a new grille treatment, a new stylized Indian head hood ornament, and updated “silver streak” chrome bands on the hood that runs from the radiator to the windshield. The Chieftain comes in six body styles, all of which can be equipped with either a six cylinder or eight cylinder engine. Chieftains sixes start at $1,852 (about $19,000 today) for a two-door sedan and top out at $2,265 ($23,300 today) for a convertible or $2,201 ($22,600) for a stylish Catalina hard top. Streamliners, which are based on an older design, come in only one body style, a sedan coupe, although a station wagon based on the Streamliner platform is also available. Streamliner sixes start at $1,831 ($18,800 today) and the station wagon starts at $2,370 (24,300 today). Eight cylinder engines are available across the entire lineup, adding about $70 ($720 today) to the price. A Hydra-matic transmission is optional at $158 ($1,625 today). This will be the Streamliner’s last year of production. It had been introduced in 1942, just before all civilian automobile production ended due to the war, and it was the first Pontiac model that became available when production resumed for the 1946 model year. 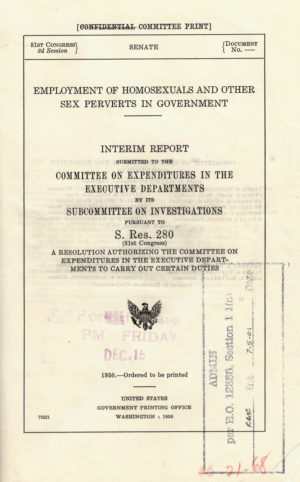 Dec 15: The Senate Committee on Expenditures in the Executive Departments issues its report, “Employment of Homosexuals and Other Sexual Perverts.” The subcommittee, chaired by Sen. Clyde Hoey (D-NC), concludes that homosexuals should not be employed by the federal government because they are “generally unsuitable” and constitute a security risk due to their supposed vulnerability to blackmail, despite any evidence of this having occurred. The subcommittee’s report also says that gay people lack emotional stability, have weak “moral fiber,” are a bad influence on the young, and attract others of their kind to government service. “One homosexual,” the report warns, “can pollute a Government office.” The report excludes testimony from authorities and witnesses who urge a more tolerant approach. The Hoey Committee doesn’t make any legislative recommendations, but it urges government agencies and the Civil Service Commission to aggressively enforce their existing policies banning gays from federal employment. The report will be widely distributed and become highly influential in shaping federal policy for decades to come.

Dec 15: President Truman addresses the nation on radio from the White House to proclaim a national emergency due to the war in Korea. “Our homes, our nation, all the things we believe in are in great danger,” he says. “This danger has been created by the rulers of the Soviet Union. … The future of civilization depends on what we do — on what we do now, and in the months ahead.” 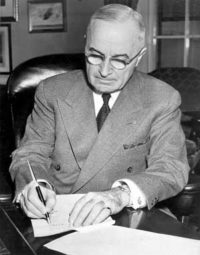 Dec 16: President Truman signs Presidential Proclamation 2914 which calls for strengthening the country’s defenses and establishes the Office of Defense Mobilization. The new office is empowered with establishing production controls to ensure an uninterrupted supply of goods and material for the military, and to provide economic stabilization through wage and price controls.

Dec 18: President Truman orders the establishment of the Nevada Test Site to allow nuclear weapons testing to be performed in the U.S. The first atomic bomb detonation at the new site will take place just six weeks later.

Dec 21: Gen. Douglas MacArthur orders news censorship from the Korean War. All news reports, magazine articles, photographs, film and broadcasts must be given official clearance from his office. Prohibited news includes any criticism of American or U.N. soldiers and commanders, and their handling of the war. All correspondents are put under the U.S. Army’s jurisdiction. Punishments for violating the order range from suspension of privileges to trial by court martial.

Dec 24: The last American ship departs from Hungnam, bringing an end to the safe evacuation of American, British and South Korean forces from North Korea. The waterfront is destroyed by explosive charges placed by Navy demolition teams and detonated when the ships are at a safe distance.

Dec 31: The Chinese Army launches its Third Phase Offensive with an attack on Seoul and other positions south of the 38th Parallel.