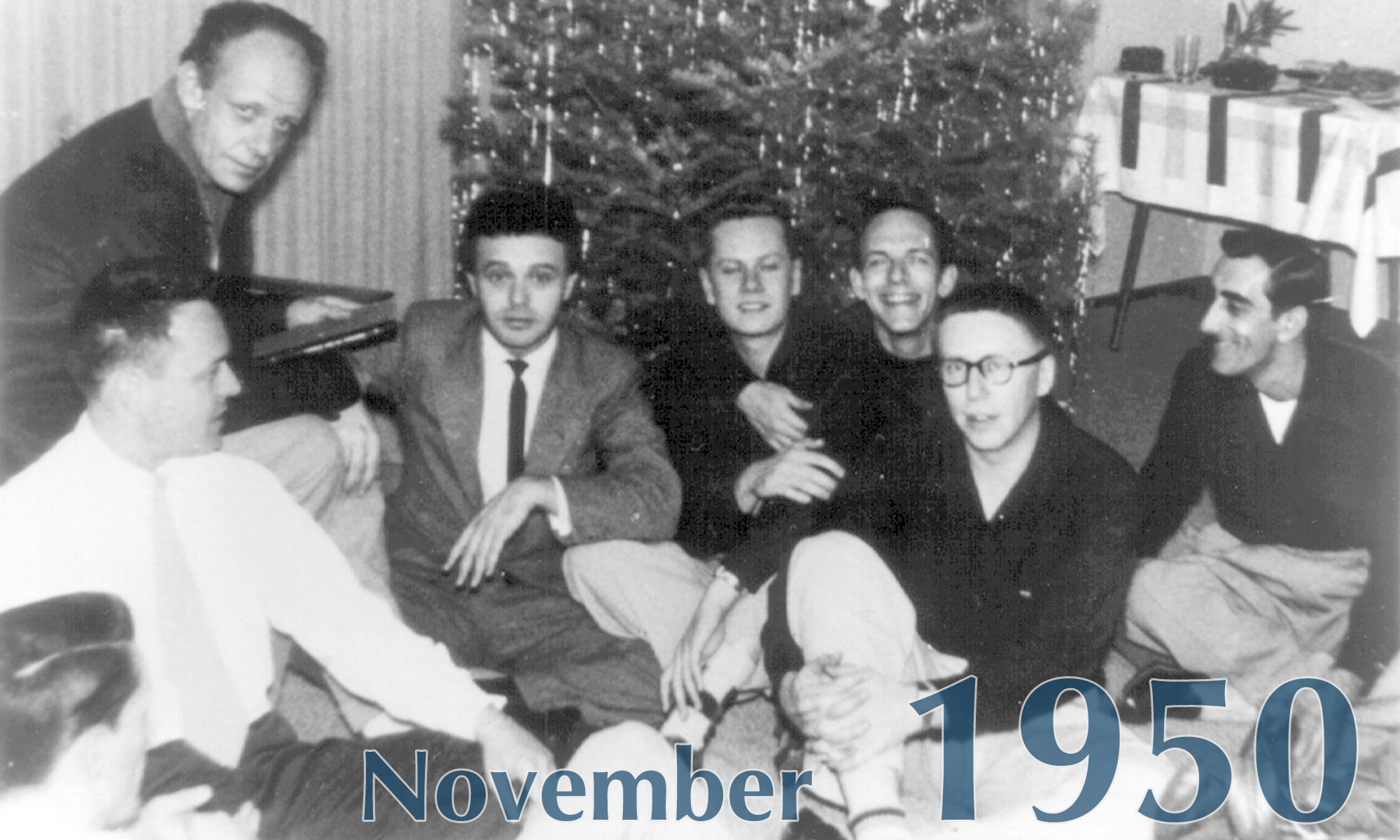 Nov 1: Pope Pius XII defines the dogma of the Assumption of the Blessed Virgin Mary, which says that God took Mary’s body into Heaven after her death.

Nov 3: A second Mississippi college newspaper calls for admission of Negroes to white graduate schools in the state. Lowrey Varnado, editor of Millsaps College paper Purple and White, endorses an editorial by Albin Krebs that appeared last week in the University of Mississippi’s student newspaper, the Mississippian. “Although we do not admire the anger-provoking manner in which Mr. Krebs presented his little piece of incendiary,” writes Varnado, “still we find ourselves in whole-hearted agreement with the principle he expressed. … For a long time, now, we have been telling Mississippi Negroes they must seek to improve and educate themselves if they are to expect equal privileges with white people. And in the same breath we have been denying them the right to get educated. Negroes wishing professional training have no opportunity to receive such training in our state. Consequently there are very few negroes in Mississippi who are professional men. And so we take our stand beside Mr. Krebs, not with a foolish desire to stir up anger and hatred but with an overwhelming sense of responsibility as Christians and Americans to carry out what seems our obvious duty toward the Negro.”

Nov 5: Chinese forces, surprised by their victory in Unsan, press forward with the goal of pushing U.N. forces back into Pyongyang. But food and ammunition forces force the Chinese to disengage. This ends the Chinese First Phase campaign, much to the surprise and relief of U.N. commanders. This leads Gen. MacArthur and other U.N. brass to mistakenly assume that only a smaller, weaker Chinese force is present in North Korea.

Nov 7: Democrats retain their congressional majorities in the midterm elections despite losing 28 seats in the House and five in the Senate.

Nov 8: The University of Mississippi Student Senate debates a petition to fire Albin Krebs as editor of the campus newspaper, the Mississippian. On October 27, Krebs wrote in a signed editorial that “we believe that qualified negro applicants should be allowed to enter the school of law and any other professional school that will enable them to better themselves, and thus, everyone else in the state.” The editorial provoked an outcry across the state and on campus, where a cross was burned outside of Krebs’s dormitory. Tom Roberts, of Montrose, Mississippi, was among those arguing for Krebs’s dismissal. “It is not a question of freedom of the press,” says Roberts. “The students own the paper. If Krebs can’t follow the policy of the student body he should not be allowed to continue as editor.” Roberts says that Negroes have been admitted to graduate schools in Texas and elsewhere “because no one opposed it there.” He demands that Ole Miss demonstrate its opposition. But student body president Maurice Dantin defends Krebs’s right to print the editorial. “It is a question of whether we want censorship even of a student newspaper,” he says. The student senate votes 43 to 21 to deny the petition. As the school year comes to an end next May, the Mississippian, under Krebs’s editorship, receives a first class award from the Associated Collegiate Press for its news coverage, style and editorial page.

Nov 10: The Interstate Commerce Commission orders the end of racial segregation in the dining cars of trains that travel across state lines. The order becomes effective on December 15. 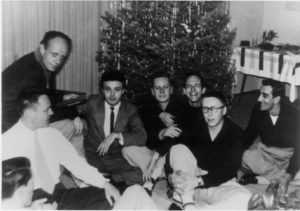 Nov 11: The Mattachine Foundation holds its first meeting. The first meeting for the forerunner of the Mattachine Society is held at Harry Hay’s home on Red Hill in Silver Lake. Five men — Hay, Rudi Gernreich, Bob Hull, Chick Rowland, and Dale Jennings — gather to form what they initially call the “Society of Fools.” The idea for the name comes from the idea that only the fool had the freedom to speak the truth to the all-powerful king. Hay’s idea was the found a group that could unify homosexuals to not only change the laws outlawing homosexual relationships, but also to “change the hearts of men, both homosexual and heterosexual.” Gruber suggests changing the name to the Mattachine Foundation, in honor of the medieval masque troops known as “matachines” (originally spelled with one “t”).

Nov 12: The innovated but now struggling Crosley Motors introduces a new diminutive station wagon to its subcompact lineup. Crosley Motors. The car manufacturer a closely-held spin-off of Cincinnati-based Crosley Corporation, which is a well-known radio and home appliance manufacturer, and broadcaster (WLW was for many years the world’s most powerful broadcast station with listeners as far away as Germany). Crosley Motors makes subcompacts only, having introduced the first compact car to American consumers in 1939, and it has stuck with the 80-inch (203 cm) wheelbase ever since. The new station wagon, at just $1,133, is most expensive model in the lineup. Prices start at $998 (about $10,400 today) for a small “business coupe.” A pickup truck can be had for the same price. Just a hundred dollars more ($1,040 today) can get you a Hotshot roadster, club convertible or “deluxe” sedan. A panel delivery truck is also available for $1,020 ($10,600 today). That gives you a small, affordable vehicle with a four-cylinder 26½ horsepower engine capable of cruising at 50 mph (80 km/h) and delivering between 35 to 50 miles per gallon (6.7 to 4.7 L/100km). Crosleys also feature electric windshield wipers, Bendix hydraulix brakes, and roll-windows. (Models before 1950 had sliding side windows.) Crosleys were very popular with a car-starved public when civilian production resumed in 1946. Those post-war models used an innovative CoBra (for Copper Brazed) engine that was reliable for military use with regular maintenance, but civilians weren’t so diligent and corrosion became a problem. By 1949, Crosley’s reputation sank. Crosely replaced the CoBra with one using a traditional cast-iron block and made replacement engines available to owners of older models. Maenwhile, other American carmakers have introduced more lavish cars that are priced, in some cases, only a little more than a new Crosley. Sales of Crosleys plunge from a peak in 1948 of 27,707 cars to only 7,612 in 1950. 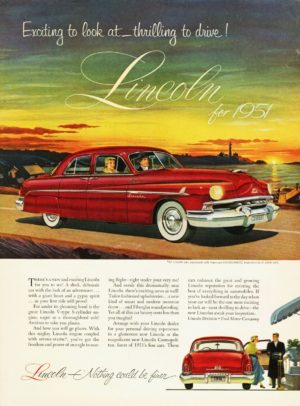 Nov 15: The new Lincolns go on display at Lincoln-Mercury dealerships across the country. The 1951 models feature smart new styling, with new rear quarter panels and fenders giving it a longer, lower, and more streamlined shape. A redesigned roof panel accommodates a 29% larger curved rear windows. Changes extend to the front bumpers, grille, and interior appointments. Two models are available, the Lincoln and the Cosmopolitan. All Lincolns and Lincoln Cosmopolitans feature V-8 engines delivering 154 horsepower. The Lincoln six passenger coupe starts at $2,621 (about $27,200 today), and the Cosmopolitan starts at $3,285 (about 34,100 today). The Cosmopolitan convertible tops out at $4,052 (about $42,100 today). 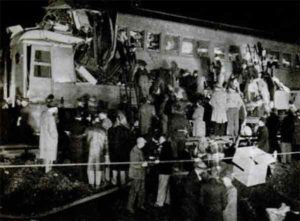 Nov 22: A Long Island Rail Road commuter train, which had stopped on the tracks while a motorman struggled to release a grabbing air brake, is rammed from behind by another train. The crash occurs on the railroad’s mail line in Queens, between the Kew Gardens and Jamaica stations. Seventy-eight are killed, including everyone in the last car of the stopped train. Thirteen are critically injured, and 350 others are hurt in the worst train wreck in New York history.

Nov 24: Gen. Douglas MacArthur launches his “Home by Christmas” offensive as a final assault by U.N. forces. He sends 110,000 U.N. troops northward to take all of North Korea all the way to the Yalu River. 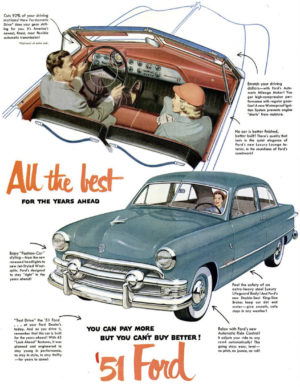 Nov 24: Ford Motor Company’s new 1951 models appear in dealer showrooms today across the country. The big news for 1951 is Ford’s new three-speed Ford-o-matic automatic transmission, which is essentially the same transmission as the one announced for the 1951 Mercury line a month ago. It’s a $168.50 option (about $1,800 toady), the same price as that charged for the Mercury line. Body styles are relatively unchanged from the year before, but the front end sports a new dual-bullet grille and longer wrap-around chrome bumpers, which gives it a heftier appearance. New for this year is the Victoria, a two-door hard top that proves a popular competitor to the Chevrolet Bel Air. Prices begin with at $1,324 (about $13,750 today) for the Deluxe 6 Business Coup and top out at $2,058 (about $21,400 today) for the Custom 8 station wagon.

Nov 25: Eric Johnson, President of the Motion Picture Association of America, issues a press release on behalf of major studio heads announcing the firing of ten Hollywood screenwriters and directors who refused to answer questions before the House Un-American Activities Committee. The statement also assures Congress, “We will not knowingly employ a Communist or a member of any party or group which advocates the overthrow of the government of the United States.” This is regarded as the public beginning of the Hollywood blacklist, although no one will publicly admit that such a list exists.

Nov 26: A week after Gen. MacArthur’s troops reach the Chinese border at the Yalu River in Hyesanjin, the People’s Republic of China launches a massive counterattack to the west, with 300,000 soldiers on the Ch’ongch’on River and the Chosin Reservoir. The Chinese troops drive a wedge between the Eighth Army on the northwestern front and X Corps in the northeast.

Nov 28: Gen. MacArthur releases a statement acknowledging that his promise to be “home by Christmas” is now in shambles in the face of a massive Chinese onslaught. His new statement says, “We face an entirely new war. … This has shattered the high hope we had that the intervention of the Chinese was only of a token nature on a volunteer and individual basis as publicly announced.”

Nov 29: Der Spiegel reports that 750 gay men have been arrested in Frankfort. As of November 25, those arrests have resulted in 140 criminal charges under Germany’s notorious Paragraph 175. Magistrate Kurt Romini denies that an official campaign had been launched, saying he was only responding to complaints from “young persons.” But it turns out that Romini himself had been in charge of handling criminal cases against gay men as State Attorney during the Nazi regime. “During his work in the Third Reich,” Der Spiegel reports, “it was not in the interest of a defendant to admit to homosexuality. As soon as he confessed, he was on the way to the concentration camp (with a pink triangle on his chest) and certain to eventually be castrated.” At the peak of the campaign, Judge Romini, who was in charge of all Paragraph 175 cases, was presiding over four trials per day. One hustler, identified as 19-year-old Otto Blankenstein, is the star witness (and often the only witness) in at least 40 cases, despite obvious “tangible symptoms of mental illness.” At least six of the accused men have committed suicide so far. Three months later, Der Spiegel will report that Blankenstein has been declared mentally ill, and Romini himself had been accused by his housekeepers of “severe night-time disorderly conduct and outburst in the presence of his professional colleagues.”

Nov 30: Apparently rattled by the strength of Chinese victories in Korea, President Truman tells reporters at a news conference that he will take “all necessary steps to meet the military situation.” A reporter asks, “Will that include the atomic bomb?” Truman answers, “That would include every weapon that we have.” Another reporter follows up: “Does that mean that there is active consideration of the use of the atomic bomb?” Truman responds, “Always there has been active consideration of its use.” A third reporter asks, “Did we understand you clearly” about active consideration of atomic weapons in Korea. Truman says it “always has been. It is one of our weapons.” Another reporter asks if he would seek U.N. authorization before using atomic weapons. Truman answers that he and the military commanders in the field would make such a decision. Foreign leaders express grave fears over this development. British Prime Minister Clement Attlee announces to Commons that he will immediately fly to Washington for an emergency meeting with Truman.