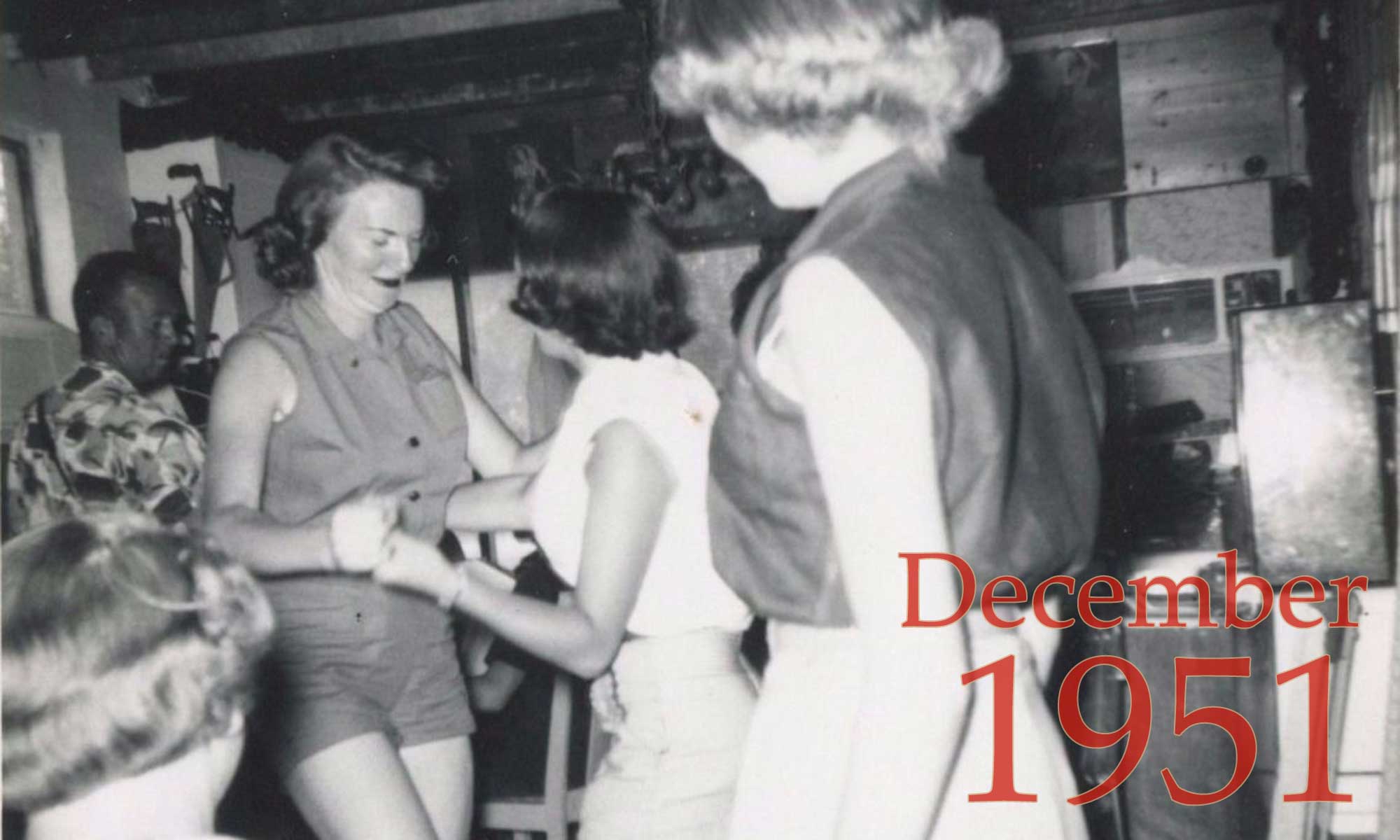 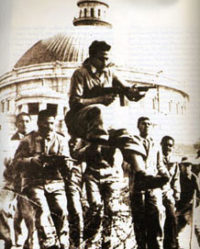 Dec 3-4: Two days of violence breaks out when Egyptian policemen and civilians battle with British forces in the Suez Canal Zone. The violence is the worst since Egypt’s unilateral abrogation of the 1936 Anglo-Egyptian Treaty in October. The treaty granted Britain a lease in the Suez Canal zone and the right to station troops there to protect the canal. But now, Egypt wants control of the canal and British troops gone. Over two days of fighting, Egyptians say that three policemen and twenty-eight civilians are killed, and more than 100 are wounded. The British say eleven soldiers are deads, and two  wounded. Demonstrations also break out in Cairo and other towns. Violence subsides somewhat only after the Egyptian government declares a state of emergency.

Dec 6: Five thousand youths aligned with the outlawed Tudeh (Communist) party rally in Teheran. They are protesting Iran’s crumbling economy brought on by Prime Minister Mohammed Mossadegh’s nationalization of the Anglo-Iranian Oil Company. The crowd is attacked by police and nationalist extremists, leading to a five-hour battle. Nationalists also wreck the offices of seven non-Communist opposition newspapers. At least eight people are killed. Teheran will be in almost constant turmoil over the next three weeks as the country prepares for elections. 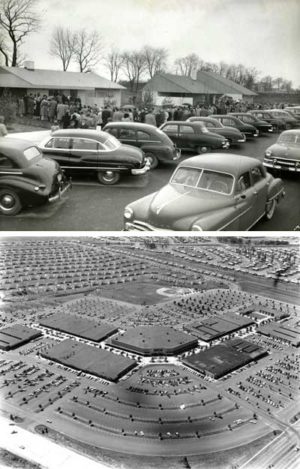 Dec 8: It’s opening day for the brand new model homes at Levittown, Pennsylvania. Crowds line up in the cold, drizzling afternoon to see the first two examples of the Levittowner. Selling for $9,990 or about $67 per month with a VA mortgage ($95,000/$640 today), it is one of six model homes to be offered in the massive, sprawling new suburb southwest of Trenton, New Jersey. This new community is close to where U.S. Steel announced plans to build a massive integrated plant at Morrisville. Levittown is master-planned to include everything needed for a self-contained town: schools, churches, parks, swimming pools, and a centrally-located Shop-a-rama shopping center. The new suburb will be built with military precision. Each block will consist of alternating designs and pastel exterior colors. All materials are purchased directly from manufacturers. Armies of subcontractors assemble pre-cut and pre-packaged materials, and workers move from site to site where they perform one of more than 100 tasks. It’s a sort of an assembly line, except the workers move instead of the product. The building process is so meticulous that eight pounds of yellow nails are delivered exactly on time to every seventh house, which just happens to have yellow siding. Houses go up in a single day. Levittown’s new residents will be mostly blue collar, middle class workers of all religions and ethnicities — except African-American. The Levitts refuse to sell to blacks, fearing that doing so will drive away white customers. This will be the second and largest of the three Levittowns to be built. The first Levittown was built in Long Island between 1947 and 1952.

Dec 10: With truce negotiations deadlocked in Panmunjom, U.N. negotiators push for an agreement to exchange prisoners of war. The U.S., South Korean and U.N. forces have not received a reliable accounting of prisoners being held by the North Koreans and Chinese, and they suspect the Communists are using the prisoners as a bargaining chip. U.N. Command estimated in November that as many as 8,000 American prisoners of war have been executed in violation of the Geneva Conventions.

Dec 12: The Egyptian government says that it is downgrading its relations with Britain by withdrawing its Ambassador from London. The move is part of the larger dispute over British troops remaining in the Suez Canal Zone, which  Egypt now calls “territory under British military occupation.” 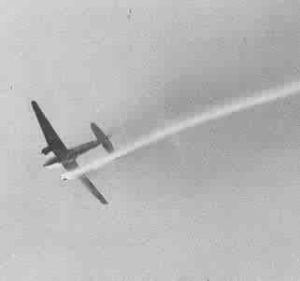 Dec 16: A Miami Airlines Curtiss C-46 passenger plane bound for Tampa and Miami crashes shortly after takeoff from Elizabeth, New Jersey. All 52 passengers and 4 crew members are killed. The plane is already in flames when it falls into the shallow Elizabeth River, seven minutes after taking off from Newark Airport. One witness says that the right engine was “smoking very badly on the take-off. It took the whole length of the field before it rose to about fifty feet.” The flight had been delayed several hours for repairs. It is the second-deadliest plane crash so far.

Dec 19: Communists in Korea finally give the U.N. Allies lists of 3,198 American prisoners of war. The lists also include 7,142 South Koreans, 919 Britons, and another three hundred from other U.N. countries. The accounting falls far short of the 100,000 U.N. and South Korean soldiers missing in action. The allies have no way to verify the list’s completeness because the North has refused all visits from the International Red Cross, in defiance of the Geneva Conventions. The allies give the North a list of 132,474 Chinese and North Korean prisoners. 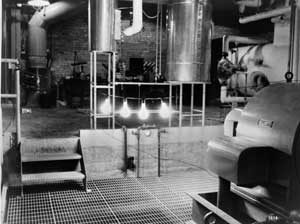 Dec 20: An experimental nuclear reactor at the National Reactor Testing Station west of Idaho Falls, Idaho, has successfully generated about a kilowatt of electricity for the first time, just enough to power four 200-watt light bulbs. The next day, the  breeder-reactor will generate 200 kilowatts, enough to power the entire building. 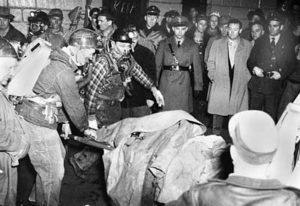 Dec 21: A violent explosion rips through the Orient 2 coal mine near West Frankfort, Illinois, during the last shift before a scheduled Christmas shutdown. The tragedy claims the lives of 119 coal miners. One miner, Cecil Sanders, will be rescued alive on Christmas Eve, 56 hours after the explosion. He had resigned himself to the fact that he was going to die. He scribbled a note, reading “May the good Lord bless and keep you, Dear wife and kids. Meet me in heaven.”

Dec 22. The U.N. Command charges that the list of allied prisoners of war supplied by China and North Korea fail to mention about a thousand names that had been previously reported as captives. The U.N. command also calls for the immediate inspection of Communist prisoner of war camps by the International Red Cross as required by the Geneva Conventions. 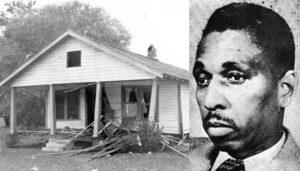 Dec 25: The home of civil rights leader Harry T. Moore is bombed in Mims, Florida, killing Moore and seriously injuring his wife, who will later die of her injuries. The bomb was placed beneath their bedroom. Moore, a state coordinator for the NAACP, is the third African-American to die in connection with the so-called Groveland rape case of 1949, in which three young African-Americans were wrongfully accused of raping a white woman. He had been raising money for their defense. After Lake County Sheriff Willis McCall shot two of the defendants in his custody in November, killing one, Moore had called on the governor to suspend McCall and investigate allegations of prisoner abuse. Those responsible for the bombing will never be brought to trial. 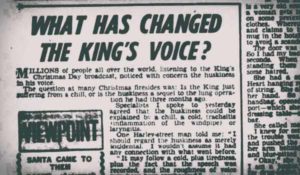 Dec 25: King George V of Britain gives his traditional Christmas radio broadcast. In this speech, he speaks of his gratitude for the many expressions of goodwill he received following his September surgery. “From my peoples in these islands and in the British Commonwealth and Empire –– as well as from many other countries – this support and sympathy has reached me and I thank you now from my heart. I trust that you yourselves realise how greatly your prayers and good wishes have helped and are helping me in my recovery.” Many listeners are disturbed by the weakness in his voice. The public has been told that the speech was recorded — all of his previous speeches were delivered live. What they don’t know is that he had to record the speech in short segments and the BBC edited them together for broadcast. 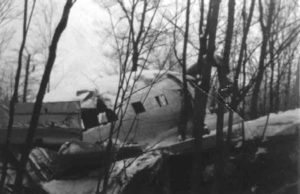 Dec 29: A Continental Charters (unrelated to the later Continental Airlines), flight from Miami to Pittsburgh and Buffalo, crashes near Napoli, New York before reaching its final destination. The unscheduled flight — an inexpensive service where planes take off when enough passengers show up — had been delayed seven hours in Miami due to mechanical problems with the military surplus C-46. The flight arrives safely but late in Pittsburgh. To save time, the flight crew opts to fly to Buffalo under Visual Flight Rules (VFR), instead of filing a flight plan under Instrument Flight Rules (IFR). IFR would have required a less direct route, which would have meant an additional delay in Pittsburgh for refueling. The crew were advised that due to low clouds, IFR was recommended. The crew ignored the warning, and took off under VFR. Consequently, due to poor visibility, they strayed from their intended course to Buffalo and drifted closer to the Allegheny foothills. The plane strikes treetops along Bucktooth Ridge, at 2375 feet, which shears off the plane’s wings. The fuselage crashes into the snow. Twenty-six are killed. including the pilot and co-pilot. Fourteen survive. Two days later, one of the survivors will finally make his way to a farmhouse several miles away and get help. 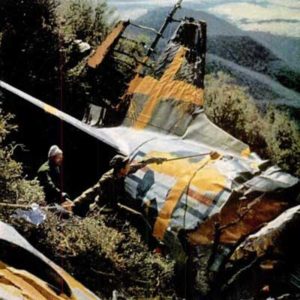 Dec 30: An Air Force C-47 transport plane crashes into 7,000 ft. Armer Mountain about 65 miles northeast of Phoenix during a storm. The plane is fifty miles off course and experiencing navigation instrument problems as it tries to approach Williams Air Force Base in Arizona for refueling. It flies into a rugged cliff about 100 feet below the mountain’s crest. All twenty-eight on board are killed, including nineteen West Point cadets who were returning from Christmas leave. It will take four days before a rescue party led by local cowboys is able to reach the crash site.

Dec 31: Chinese and North Korean negotiators reject a “final” U.N. offer for terms of a truce. The rejection comes amid widening disagreements over the exchange of prisoners of war, and other provisions related to military resupply and airfield construction. Gen. Howard M. Turner, senior allied negotiator, says that any new proposal will have to come from the other side.