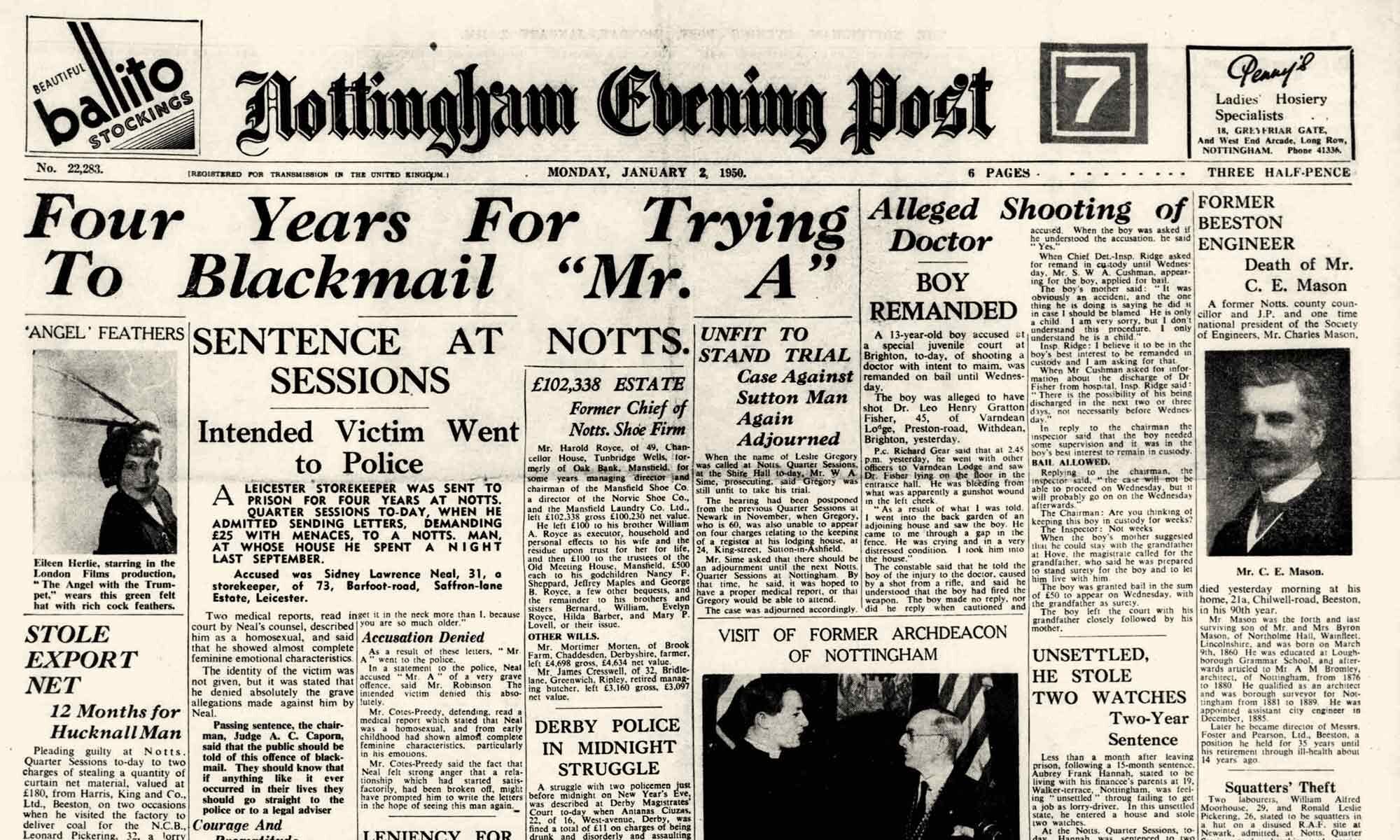 Sidney Lawrence Neale, a thirty-one storekeeper of 73 Barfoot Road, Saffron Lane Estate in Leicester, England, was found guilty in Nottingham Quarter Sessions of blackmailing an unnamed man, referred to as “Mr. A.” The Nottingham Evening Post that night reported the following:

Two medical reports, read in court by Neal’s [sic] counsel, described him as a homosexual, and said that he showed almost complete feminine characteristics. The identity of the victim was not given, but it was stated that he denied absolutely the grave allegations made against him by Neal [sic]. 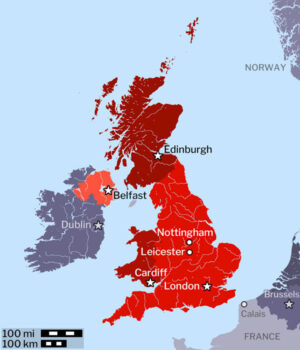 It was, of course, absolutely essential that Mr. A deny those “grave allegations.” A conviction under Britain’s sodomy law might mean a life sentence. That was a remote possibility; convictions for sodomy were practically nonexistent because the burden of proof was so high.

And where sodomy convictions were exceeding rare, gross indecency convictions were frightfully common. Playwright Oscar Wilde was perhaps the law’s most famous victim. In 1952, mathematician Alan Turing will go to police to complain someone had broken into his home. During the investigation, Turing will acknowledge a sexual relationship with the suspect. Even though Turing is a crime victim — his home was burgled — he became ensnared with the gross indecency law, and the consequences will bring his career and life to a catastrophic end.

Which is why, despite being a blackmail victim, it was absolutely essential that Mr. A deny the “grave allegations” against him.

The trial took place at Nottingham Shire Hall on December 19. The magistrates agreed to protect Mr. A’s anonymity because, it was reasoned, victims like Mr. A wouldn’t come forward if their names were going to be dragged through the press. As the Evening Post explained during the trial:

(Prosecutor F.B. Pierce) said that blackmail was a dirty and despicable crime. Not only did it aim at the pocket of the victim but often at the mind as well. Often the victim was bled almost white before the case came to the notice of the authorities, but fortunately in this case the victim had the sense to go to a solicitor before handing over any money.

Mr. A explained what happened. He met Neale in September and they became quick friends. On October 1, they met up in Leicester, and after running some errands for Neale, they decided to go to Mr. A’s house in Nottingham for the evening. Apparently, Neale was a reasonably accomplished piano player, so Mr. A invited him in to “play the piano.” One thing led to another, and soon they realized that the last bus back to Nottingham had left Leicester for the evening. So Mr. A invited Neale to spend the night. The Evening News reported that “they slept in the same bed, wich was the only one available. The next day he took Neale back to Leicester, and had not seen him since.”

On October 29, Mr. A. received a letter from “Sid”, addressed to “My darling.” According to court evidence, the letter read:

You have had your fun and you must pay for it. It was a lousy week-end, the most boring I have ever spent … I need money badly, so naturally I turn to you. You will not miss the measly sum of £25 (about £350 today). I trust you will oblige for your sake. If not, there will be an anonymous letter in Notts police station on Wednesday morning telling them all about our little escapade, and I am sure you would not like that.

Mr. A. didn’t reply, and on November 4, he received another letter. It read: “I will give you a little longer. I am sure you would not want any scandal. A man in your position could not afford it.” It also said that the writer wasn’t afraid of prison. It also warned that the writer had written to Mr. A’s next door neighbor and to the police, telling them that Mr. A used his home for immoral purposes.

If indeed Neale had sent the letters to Mr. A’s neighbors and police, then it appears that Mr. A felt he had no choice but to go to police and lodge a complaint, which he apparently did in December. And given the law at the time, of course, Mr. A would have had to deny having committed “gross indecency” with Neale. But Neale’s defense counsel wasn’t prepared to accept that bit of fiction:

Mr. Cotes-Preedy said the fact that Neal [sic] felt strong anger that a relationship which had started satisfactorily, had been broken off, might have prompted him to write the letters in the hope of seeing this man again.

Neale was found guilty of blackmail and sentenced to for years in prison. In passing sentence, Judge A.C. Caporn urged the public to “go straight to the police or to a legal adviser” if they find themselves in a similar situation. 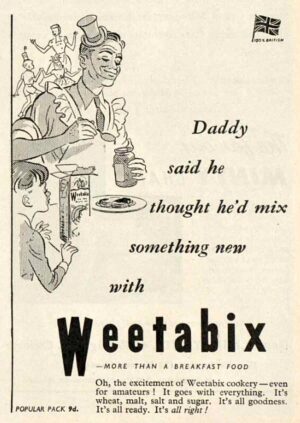