Gay history, especially before the rise of the women’s movement in the 1960s, tends to be centered on the experiences of gay white men. We can all imagine what it was like to be a gay man fifty-five years ago thanks to the early homophile magazines ONE and The Mattachine Review. The Review dealt almost exclusively with male concerns, while ONE, in its early days, mostly relegated women’s concerns to a segregated column called “The Feminine Viewpoint.” In 1956, the Daughters of Bilitis began publishing The Ladder, to provide women with a voice separate from men. And thanks to The Ladder, we have, preserved like a time capsule, a collection of voices from, well, the feminine viewpoint.

A very brief essay that appeared in the March 1958 issue of The Ladder illustrates the pervasive invisibility of lesbians. Much of that invisibility was cultivated by lesbians themselves. Butch lesbians, like effeminate men, were the visible side of homosexuality, and it represented a specific set of dangers to whose who were not open about their sexuality. Drawing attention, as this very visible group of people did by their modes of dress and behavior, was dangerous to those who weren’t prepared to deal with the consequences. This kind of visibility meant lost jobs, scornful neighbors, and angry landlords.

And drawing attention in a decade that prized conformity meant losing access to that most prized commodity, respectability. Which is why so many lesbians and gay men were obsessed with “fitting in.” They prided themselves on their ability to pass as straight, more or less. “No one would suspect,” they’d tell themselves. Their invisibility made their respectability possible. And respectability represented the  highest achievement they could hope to gain in a society that rewarded conformity to social norms. Without it, they’d just be a bunch of queers.

It’s a sad sort of pride where one is proud of not showing others who they really are. This troubled, contradictory essay perfectly illustrate what this cheerless sort of pride looks like. It’s signed Sandra Price, although the name  is almost certainly a pseudonym, given its message. 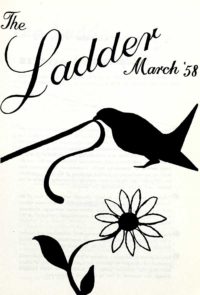 I wish it were possible for me to wr1te this on my letterhead, but my “world” would be too shocked if they were to learn their perfectly proper and “normal” appearing friend, business and professional member of their society were any different than she appears. And more shocked to know that she is secretly glad to be a Lesbian.

I’ve never consulted a psychiatrist (but many have with me) as I am not emotionally disturbed nor suffering from a guilt complex. I am perfectly healthy, have no need or use for drugs, cigarettes or alcohol. Although I move in a society that uses them with the rest of their problems, I’m not concerned with their use.

I’ve only had one “friend”. Fifteen years ago we “discovered” one another at a rather boring society tea and instantly we knew there was a tie that bound us. We’ve been true. There is nothing “cheap” about the deep love that we have shared. We are both very prominent women. There has never been the slightest finger of suspicion pointed at us. Our manners in public are such as not to attract any undue attention. We are both attractive, well groomed, fashionably dressed, completely feminine.

If occasionally our hands meet under the table when dining out it is with complete fulfillment and security. We have found what few individuals ever do — that is complete compatibility and understanding, without jealousy or distrust.

I am always secretly amused when some wise person says “I can tell one a mile away”. When my secretary, a clever young woman who has been with me for 10 years, said to me recently when she accidentally saw my copy of THE LADDER: “What do you want with that stuff — you’re no homosexual” I knew my mask had never slipped, and I was secretly proud of the fact. But I long f or the day when I could say “I am a Lesbian” with the same ease I say “I am a Republican”.

My friend and I do not and never have lived together. We have conventional families who never even guess we are  “different”. We manage to have a day a week together. We meet at social affairs and quite often we weekend, or take a vacation somewhere, even Europe.

I would not change my way of life, even if I could. Of course, we all should come out in the open and proclaim our status, but the world is not quite ready for that. While I’m not afraid of men, mice, snakes or storms, I’m just not brave enough — yet — to say “Yes, I am!”

Sandra Pine’s situation may not have been necessarily typical, although certainly was not all that rare. In July, Pine’s contradictory essay boasting of her invisibility elicited a response from Jule Moray, who challenged Pine to consider the price she has paid for her invisibility. 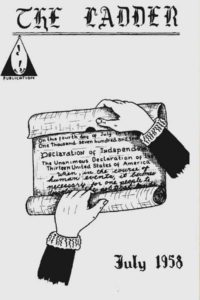 I was touched by your article, “Yes, I Am” in the March edition of THE LADDER; touched, and a little terrified.

I see two well dressed women, perfeotly groomed, at whom the finger of suspicion has never pointed; their hats fashionably perched above masks that never slip. Two perfect ladies, completely feminine. Miss Pine, might I ask what are you being feminine for? Whom are you trying to deceive? Yourself, or the well dressed, well groomed, completely masculine men you meet every day? Or your conventional families, who trust you and would never guess? Is it not possible that these normal business and professional friends are as afraid of showing you that they know, as you are afraid of knowing they know? Let us by all means keep our personal lives as private as can be; but if we are lucky enough (and many are not) to have private lives why not let them be as full and satisfying as we can possibly make them? A hand touched beneath the table; one day in seven alone; the occasional week-end; even a trip to Europe in fifteen years — is that the best you can do for your love life, Miss Pine?

Would you lose your job, your mother’s love or your right to vote Republican if you let slip just a couple of small hairpins, took a flat with you friend [sic], and started to make up for all the time you two have lost? Who is going to worry? Not your secretary — you haven’t made a pass at her in ten years — we know that. Not those professional and business gentlemen — you’ve been giving them the red light all along. Who else is there? The ladies at your social gatherings — they’ll be only too thankful you’re not after their men. And at the very worst, if the whole town knows you’ve left home and are sharing with a roommate; is that going to rock anybody?

My friend and I have been together for twenty years; it took us eight years, owing to the war before we were able to live together. We’re not at all smart or well groomed, and I don’t honestly know if you’d say we are feminine or not. Probably in every plaoe we’ve ever lived everyone has known we are Lesbians. We rarely think about it, and we never worry about it. Certainly no one has ever hinted that our relationship is at all strange. Most of our friends are married and no one has ever refused to come to our house. We, in fact, think ourselves liked, sometimes well-liked, very rarely disliked.

Miss Pine, you are not afraid of men, mice, snakes or storms? All right; why don’t you take that flat? A comfortable one, serviced, you can afford it. Let yourselves go a bit over the decor, be bold, but cosy; and, before it’s too late, see to it that there’s only one bedroom with a full size double bed. You won’t, either of you be so well groomed in the future — but it will be worth it.

March 1958: A lesbian describes her pride in being invisible. 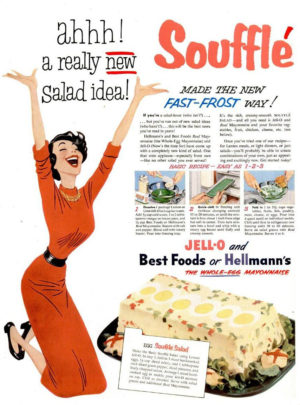 Headlines: The Army launches a second Explorer satellite, but its final stage fails to ignite and the satellite falls back to earth. President Eisenhower opts against accelerating development of nuclear-powered aircraft. The U.S. Navy mothballs the U.S.S. Wisconsin, leaving the U.S. without a battleship on the seas for the first time since 1895. B-47 bomber accidentally drops an unarmed atom bomb on a farm near Mars Bluff, South Carolina. Cuban President Fulgencio Batista suspends Constitutional freedoms and imposes censorship on domestic and foreign media. The U.S. Navy successfully launches its second satellite, Vanguard 1. Elvis Presley is inducted into the U.S. Army. 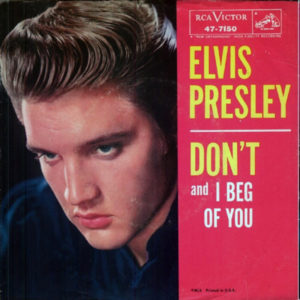 On the radio: “Don’t” by Elvis Presley, “Get a Job” by the Silhouettes, “Sweet Little Sixteen” by Chuck Berry, “Short Shorts” by the Royal Teens, “Oh Julie” by the Crescendos, “26 miles (Santa Catalina)” by the Four Preps, “Who’s Sorry Now” by Connie Francis, “The Walk” by Jimmie McCracklin and His Band, “Tequila” by the Champs, “The Stroll” by the Diamonds, “At the Hop” by Danny and the Juniors, ,”Lollipop” by the Chordettes, “Breathless” by Jerry Lee Lewis.