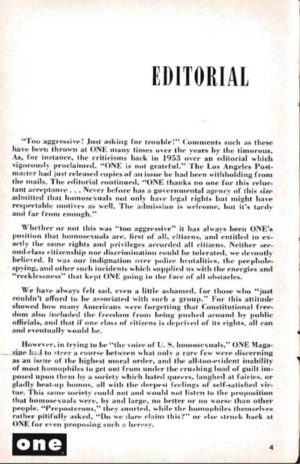 ONE, the nation’s first nationally-distributed gay magazine, was pretty bold in the 1950s. If its reputation for being old-fashioned and timid in the 1960s contributed to its demise, that was only because the gay rights movement had moved forward while ONE stayed put. ONE’s founders consisted of disaffected former Mattachine members tired of its endless, aimless meetings and timid policy positions. ONE reveled in the rare gay rights victories and  denounced its foes. It faced down the FBI and fought postal authorities, taking the Post Office all the way to the U.S. Supreme Court — and won.

So ONE, at least in its early years, was aggressive, sometimes too aggressive in the view of some in the gay community. In a March 1959 editorial, ONE’s board chairman Dorr Legg pushed back against that criticism, hard.

“Too aggressive! Just asking for trouble!” Comments such as these have been thrown at ONE many times over the years by the timorous. As, for instance, the criticisms back in 1953 over an editorial which vigorously proclaimed, “ONE is not grateful.” The Los Angeles Postmaster had just released copies of an issue he had been withholding from the mails. The editorial continued, “ONE thanks no one for this reluctant acceptance… Never before has a governmental agency of this size admitted that homosexuals not only have legal rights but might have respectable motives as well. The admission is welcome, but it’s tardy and far from enough.”

Whether or not this was “too aggressive” it has always been ONE’s position that homosexuals are, first of all, citizens, and entitled to exactly the same rights and privileges accorded all citizens. Neither second-class citizenship nor discrimination could be tolerated, we devoutly believed. It was our indignation over police brutalities, the peephole spying, and other such incidents which supplied us with the energies and “recklessness” that kept ONE going in the face of all obstacles.

We have always felt sad, even a little ashamed, for those who “just couldn’t afford to be associated with such a group.” For this attitude showed how many Americans were forgetting that Constitutional freedom also included the freedom from being pushed around by public officials, and that if one class of citizens is deprived of its rights, all can and eventually would be.

However, in trying to be “the voice of U.S. homosexuals,” ONE Magazine had to steer a course between what only a rare few were discerning as an issue of the highest moral order, and the all-too-evident inability of most homophiles to get out from under the crushing load of guilt imposed upon them by a society which hated queers, laughed at fairies, or gladly beat-up homos, all with the deepest feelings of self-satisfied virtue. This same society could not and would not listen to the proposition that homosexuals were, by and large, no better or no worse than other people. “Preposterous,” they snorted, while the homophiles themselves rather pitifully asked, “Do we dare claim this?” or else struck back at ONE for even proposing such a heresy.

Legg noticed that all of the legal victories so far came about because heterosexual lawyers were willing to take up the causes that “homosexuals have hitherto been too spineless to do for themselves”:

When are American homosexuals going to stop sitting around pitying themselves, excusing themselves, hiding their faces and bemoaning their lot? When are they going to roll up their sleeves and do some of the hard work and the fighting that any segment of society must do to defend its own rights. These attorneys are pointing out some of the ways of going at these things. How embarrassing that this should be necessary! …

A salute to the attorneys for waking us up! Once awakened, what are we going to do about it? Let it never be forgotten that evils unchallenged grow even worse, nor that few evils are more vicious than the suppression of personal freedoms. ONE proposes to strengthen its battle for the social and civil rights of homosexuals. The ride may be bumpier from here on out. But what is anyone with a shred of self-respect to do about that?

March 1959: ONE magazine asks, “When will homosexuals stop pitying themselves? 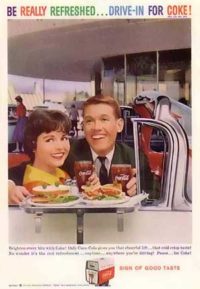 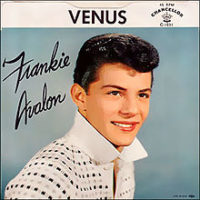 On the radio: “Venus” by Frankie Avalon, “Stagger Lee” by Lloydd Proce, “Donna” by Ritchie Valens, “Charlie Brown” by the Coasters, “16 Candles” by the Crests, “Petite Fleur” by Chris Barber’s Jazz Band, “I Cried a Tear” by LaVern Baker, “The All American Boy” by Billy Parsons, “Alvin’s Harmonica” by David Seville and the Chipmunks, “The Hawaiian Wedding Song” by Andy Williams, “It’s Just a Matter of Time” by Brook Benton, “Come Softly To Me” by the Fleetwoods, “Never Be Anyone Else But You” by Ricky Nelson. 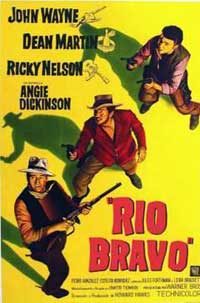