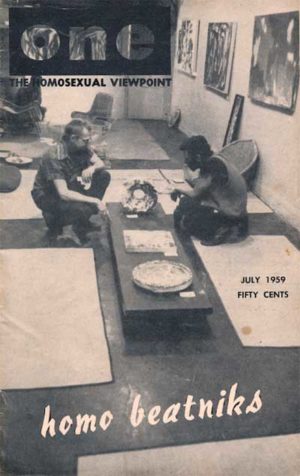 The “Beat Generation” started as a small group of writers and artists in New York’s Greenwich Village. Allen Ginsberg’s Howl (1956), William S. Burroughs’s Naked Lunch (1957), and Jack Kerouac’s On the Road (1957) set the mood. Bebop jazz and bongo drums were its soundtrack.  The Beats, as they were called, were always small in number, but they were very influential. They defined what it meant to be avant-garde in the American 1950s.

The Beats saw themselves as innovative artists and free thinkers. Their credo mixed modernism, romanticism, existentialism, anti-authoritarianism, surrealism, absurdism, chemical experimentation, and hedonism. They worshipped at the temples of City Lights bookstore, Cafe Trieste and Vesuvio, the Co-Existence Bagel Shop, the Six Gallery. The Beats more or less picked up where the Lost Generation left off when the blitzkrieg chased them out of Paris.

By 1957,  the movement’s leading lights, for the most part, had relocated to San Francisco’s North Beach neighborhood. That’s when the San Francisco Chronicle’s Herb Caen dubbed them “Beatniks,” a take-off of the Soviet Sputnik satellite that had been launched just months before. The Beats hated the nickname. But it stuck, especially among conservative detractors who thought that they detected a whiff of anti-American and Communist sympathies. The Beats’ overall rebellion against the straight-laced norms of the McCarthy-era Fifties marked them as dangerous. And fascinating. 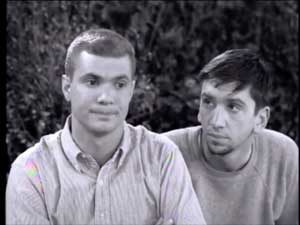 Pop culture found it easy to satirize them. CBS gave America the ultimate Beat stereotype, Maynard G. Krebs, a character played by a pre-Gilligan Bob Denver on The Many Loves of Dobie Gillis. It ran from 1959 to 1963. Maynard started out as a sidekick to all-American girl-crazy Dobie. By the time the series ended, Dobie was often playing second fiddle to Maynard, such was the strength of the Beatniks’ appeal. 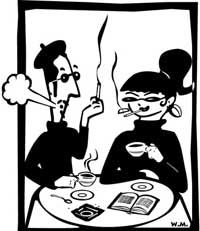 The Beats had already left the scene by the time Dobie Gillis debuted. What replaced them — and what Dobie Gillis exemplified — was Beatnik as fashion, a style shorn of its substance. Goatees, berets, black sweaters, bongo drums, roll-your-own cigarettes (sometimes using tobacco) all became signifiers of being hip. People spent money to look like the Beats, and other people made money pretending to be Beats. The original Beats didn’t die out. They were commodified.

But while it lasted, iconoclast movement drew all sorts of non-conformist, including the ultimate of non-concormists, gay people. In 1959, ONE magazine, the nation’s first nationally-distributed gay-themed publication, featured an article on “The Homosexual and the Beat Generation.” The author, Wallace de Ortega Maxey, embodiment counter-culturalism before it was cool. A former priest and Archbishop of the breakaway American Old Catholic Church, he collected consecrations from a bewildering number of pseudo-Catholic churches, in addition to his first one from the Episcopal Church. He finally abandoned independent Catholicism in 1954 and established a Universalist Church, first in Los Angeles and then in Fresno. Maxey’s interests were very small-c catholic. He was an early Mattachine member, and in 1958 he self-published Man Is A Sexual Being.

When  Maxey wrote his article for ONE, tourists and wannabe weekend Beats descended on San Francisco to gawk at the real articles. Maxey contrasted these poseurs with the “real” Beats: 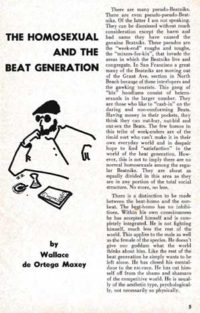 This gang of “kix” hoodlums consist of heterosexuals in the larger number. They are those who like to “cash-in” on the daring and non-conforming Beats. Havihg money in their pockets, they think they can out-buy, out-bid and out-sex the Beats. The few homos in this tribe of week-enders are of the timid sort who can’t make it in their own everyday world and in despair hope to find “satisfaction” in the world of the beat generation. …

There is a distinction to be made between the beat-homo and the nonbeat. The beat-homo has no inhibitions. Within his own consciousness he has accepted himself and is completely integrated. He is not fighting himself, much less the rest of the world. This applies to the male as well as the female of the species. He doesn’t give one god dam what the world thinks about him. Like the rest of the beat generation he simply wants to be left alone. He has closed his mental door to the rat-race. He has cut himself off from the shams and shamans of the competitive world. He is usually of the aesthetic type, psychologically, not necessarily so physically.

I have seen some gangling seamen and longshoremen, truck drivers, woodsmen and cement-construction workers, that would surprise all hell out of you when you listen to their conversation. In their particular fields of interest and study they are extraordinarily well informed. There is one chap I am thinking of who has been a seaman all his life, who can keep you spell-bound when telling about the “history of erotica”. Another, a female, could write a book about the world’s historic prostitutes and how they have influenced political thought. Still another homo-beat has been in several mental institutions under observation, but can reel off anything you want to know about the religions of the Orient. Of course, I am speaking of the real Beats, the ones who have severed all ties with the square world, as far as it is humanly possible to do, and still live.

It has been said that Allen Ginsberg is the St. Peter of the beat generation. He has been quoted in the New York Post (3-13-59) as saying: “I sleep, with men and with women. I am neither queer nor not queer, nor am I bi-sexual. My name is Allen Ginsberg and I sleep with whoever I want.” It has been my experience in discussing life in general with a considerable number of Beats, that these words of Allen Ginsberg voice quite accurately the opinions of the majority of the real Beats.

It’s a shame that Maxey didn’t contrast Beat-homos with Beat-heteros. In fact, he remained silent about what the interaction was like between the two. Indeed, the Beats and the gay communities overlapped considerably in North Beach. They patronized many of the same clubs, coffee houses and book stores.

But as with the culture at large, Beats-homos tended to operate as a separate subculture within the Beat culture. Beats generally held femininity — and the effeminate male — in disdain. “Beat culture permitted one to be kooky,” one San Francisco gay resident once noted. But the gender-bending nature of gay culture, with its embrace of drag and camp, was generally very distinct from the mystical and masculine image embraced by Beats.

Maxey went on to describe two particular “Beat-homos.” Neither  of them, interestingly enough, embody Maxey’s ideal “Beat-homo” in the least. “Tom Doe” had been kicked out of the Army for his homosexuality, and he had trouble finding work thanks to his less-than-honorable discharge. He lost his home, turned to alcohol, and “ended up three months later on a pad in Beatnik-land” where he discovered Maxey’s book:

When finally he was able to stop his self-deception and admit to himself he was what he was, all other matters took their proper place. When this bug-a-boo was disposed of and he could see his “whole self”, not just the phantom side, it was not long before he had re-established himself. However, he still thinks of himself as a Beatnik and has never moved away from Beatnik-land. At present, after much struggling and hardship he owns and operates a “shop” making a moderate living off the “squares” that come to stare at the Beats.

The second example, “Jim Doe,” came off as a confident, outspoken gay man who “freely and frankly admitted to such tendency” — at first. First impressions can be deceiving. First of all, he was probably bisexual, as this sketch reveals. But it also turned out that he wasn’t all that “completely integrated” within his own consciousness.

What was his problem? Doubt. Underneath all the social relationships there was ever present a constant fear of someone betraying him. Of misplaced confidence. He never completely trusted anyone. Basically, when he got right down to the subject he was so damn lonesome, at nights after social events he usually went home alone, locked himself in his room and cried.

Doubt was his problem. First, I learned that he really doubted himself. After considerable discussion with Jim, I came to the conclusion his acceptance of his homosexuality was not as he made it appear. From his reading of abnormal psychology he wondered about his sex. As he said to me, “Am I a man or a woman?” “Who really was my father?” (He had never been able to find a birth record.) “Have I ever loved anyone?” “Does anything have any real meaning-or is life just an illusion?” “Dare I really trust anyone, completely?” “Must I go through all my life in doubt?” “The only reason I’m a Beatnik is that none of them try to pry into my personal life … I can get along with the other Beatniks because they don’t ask ‘personal questions’.”

Naturally it took considerable time and effort to bring about a change in his outlook on life. After exploring the various psychological “excuses” he presented for his condition, we assumed none were satisfactory by way of explanation. He had experienced a rotten home life in his youth. So have thousands of people. Examples were cited of heroic characters who began in pot-sheds. Switching to the existentialist treatment, in a few words I made it clear to him quoting from Jean-Paul Sartre: “Whereas the existentialist says that the coward makes himself cowardly, the hero makes himself heroic; and that there is always the possibility for the coward to give up cowardice and for the hero to stop being a hero. What counts is the total commitment, and it is not by a particular case or particular action that you are committed altogether.”

…The final outcome in Jim Doe’s story is interesting. He met a girl named Dora, a confirmed Lesbian. They got married and now have two children, a boy and a girl. Jim still says he is an homosexual and Dora affirms she is still a Lesbian, and they both live in Beatnik-land.

Maxey compared the Beats to the Lost Generation before it, and found the Beats lacking in some key respects:

However, with all their vices and virtues if they can teach the world by example the evils of social conformity, I feel they will go down in history as having made a worthwhile contribution.

The Beats were already a spent force by the time pop culture discovered them. But they did leave behind an example of social-noncomformity that inspired the 1960s generation of peace activists, hippies, psychedelia and the Summer of Love.

July 1959: ONE magazine explores “The Homosexual and the Beat Generation” 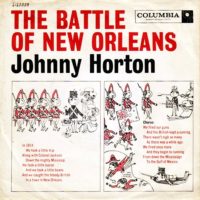 On the radio: “The Battle of New Orleans” by Johnny Horton, “Lonely Boy” by Paul Anka, “Personality” by Lloyd Price, “Dream Lover” by Bobby Darin, “Lipstick on Your Collar” by Connie Francis, “Waterloo” by Stonewall Jackson, “Tallahassee Lassie” by Freddy Cannon, “Bobby Sox to Stockings” by Frankie Avalon, “Frankie” by Connie Francis, “Tiger” by Fabian, “A Big Hunk O’Love” by Elvis Presley. 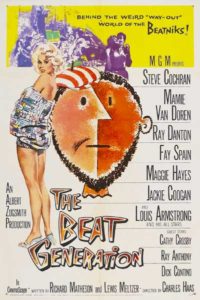