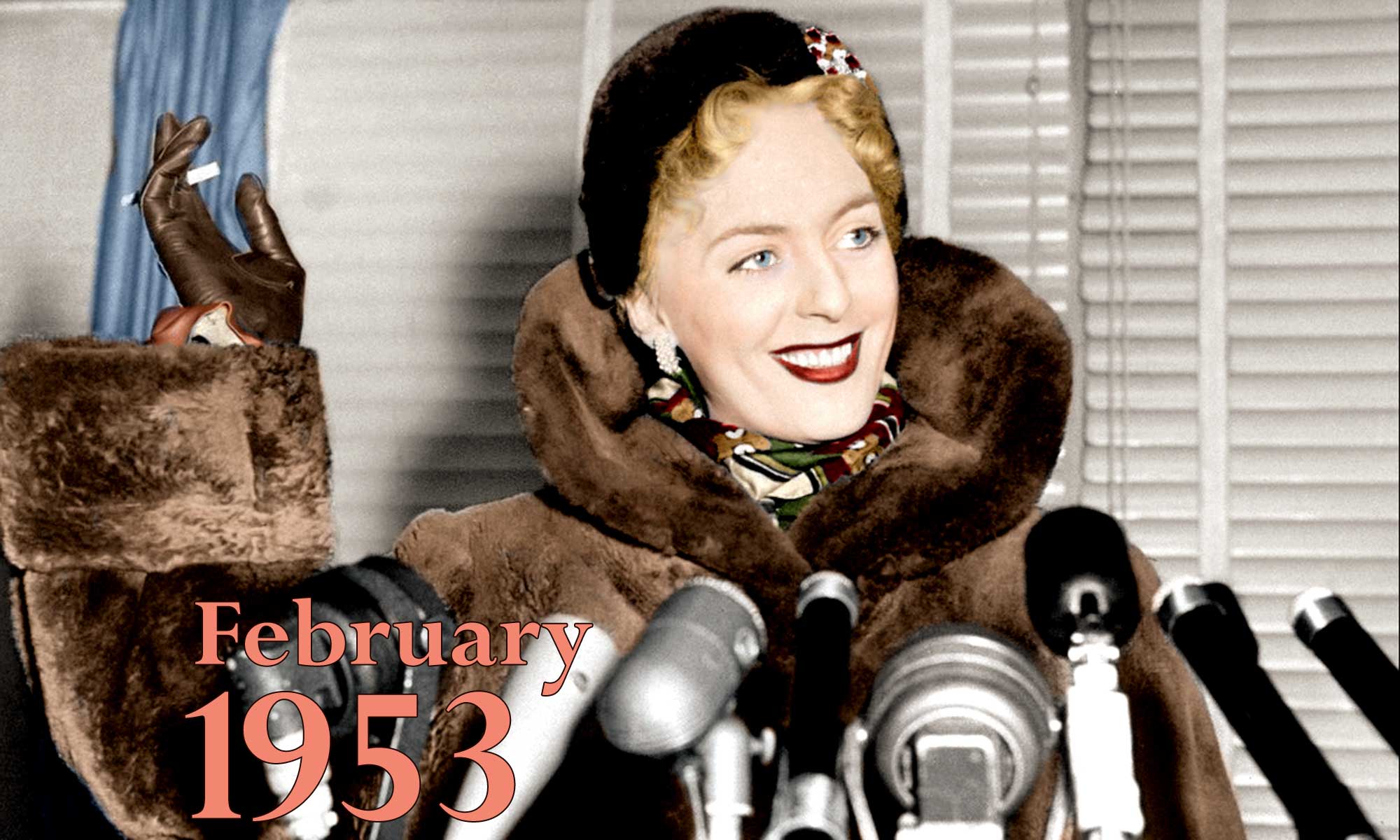 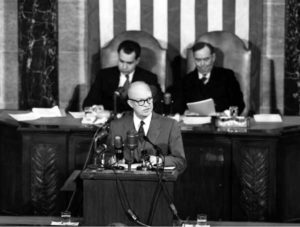 Feb 2: President Dwight D. Eisenhower delivers his first State of the Union message before a joint session of Congress. He says he will repudiate any “commitment contained in secret understandings of the past with foreign governments which permit… enslavement.” The “secret understandings” refer to any secret concessions made to the Soviets at the World War II conferences in Teheran, Yalta and Potsdam. He also says that he will institute a new security program in the Executive branch. In a veiled challenge to Sen. Joseph McCarthy (R-WI), Eisenhower asserts that the new program will “clear the atmosphere of that unreasoned suspicion that accepts rumor and gossip as substitutes for evidence.”

Feb 9: Six countries in Western Europe take their first step towards economic union when France, West Germany, Italy, Belgium, the Netherlands and Luxembourg inaugurate the European Coal and Steel Community. Between now and April 10, an increasing number of coal and steel products will be able to cross the borders of the six countries as though they were domestic products, without tariffs, quotas, or any other economic barriers.

Feb 11: President Eisenhower refuses to grant clemency to Julius and Ethel Rosenberg, saying that their passing atomic secrets to the Soviet Union might bring death to “many, many thousands of innocent citizens.” The Rosenbergs were sentenced to death in 1951 for espionage.

Feb 12: The Soviet Union breaks diplomatic relations with Israel, ostensibly in protest over a terrorist bomb attack at the Soviet mission in Tel Aviv on Monday. Israeli Prime Minister David Ben-Gurion had called the bombing a “dastardly outrage” and “a blot on our name,” and the Foreign Ministry sent a note of apology, but the Soviets rejected it as insincere. The Soviets charge that the bombing was carried out with the “connivance” of the Tel Aviv police. The Israelis are shocked and worried that the Soviets’ break in relations will have severe repercussions for Jews in the Soviet Union and Eastern Europe. Israel says the purpose of the Soviets’ action “is utter isolation and intimidation of Soviet Jewry for whose fate grave anxiety is felt.” Labour Minister Golda Meir says it is “a black day for Israel, for world Jewry and for the Jews of the Soviet Union.” The developments come one month after Pravda announced the arrest of nine “terrorist Jewish doctors” who it claims plotted to poison top Soviet political and military leaders. 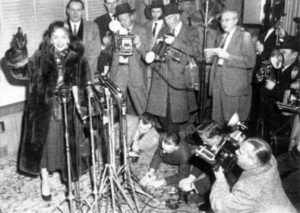 Feb 13: Christine Jorgensen returns to New York after sex reassignment surgery in Denmark. The press covers her arrival as though they were covering a carnival side show. The New York Daily News, which broker her story in December, taunted, “the lad who became a lady, arrived home from Denmark yesterday, lit a cigarette like a girl, husked ‘Hello’ and tossed off a Bloody Mary like a guy, then opened her fur coat. Jane Russell has nothing to worry about.” A Daily Mirror reporter said her voice was “a lilting, feminine soprano” dropping to “a husky, masculine contralto” as she grew tired.”

Feb 14: A National Airlines flight from Tampa to New Orleans crashes into the Gulf of Mexico off of Mobile Point after encountering severe turbulence. All 41 passengers and 5 crew members on board the DC-6 are killed. The airline, unlike other major airlines, does not maintain a meteorological staff, and its dispatchers in Miami failed to understand the danger that a storm system over the gulf posed to the flight. A National Airlines captain who had flown the same route 2½ hours earlier, said it was some of the worst turbulence he had ever experienced in flights across the Gulf. It was so bad he ordered a structural inspection of his aircraft after landing in New Orleans.

Feb 14: The Italian tanker Miriella, carrying 4,600 tons of Iranian crude oil, arrives at the port of Venice following a twenty-four day voyage from Abadan. While the tanker is pumping its oil into storage tanks, the British-owned Anglo-Iranian Oil Company obtains a court order impounding the oil pending a final decision on the oil’s ownership. AIOC contends that Iran acted illegally when it nationalized AIOC’s property without compensation, and that the oil from Iran is stolen AIOC property. The small Italian oil company Supor, which chartered the Miriella, had also chartered the Rose Mary, which had been impounded by the British in Aden.

Feb 15: South African jurist Edwin Cameron is born in Pretoria. He will serve as a judge on the Constitutional Court of South Africa. He will also be the only senior South African official to publicly state that he is living with HIV/AIDS. 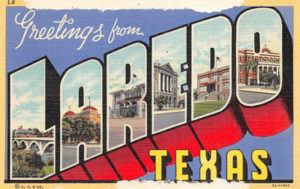 Feb 17: Laredo D.A. defends his city’s reputation. The District Attorney for Laredo, Texas, defends his fair city’s reputation against allegations made by a Mexican newspaper in Nuevo Laredo, just a cross the border, that there were homosexual activities taking place on the American side of the line. D.A. James Kazen was responding to a series of articles in El Mañana, a morning daily with wide circulation in both communities, which claimed that many prominent citizens of Laredo were involved in homosexual activities, and promised to run a list of names in a future article. Kazen denounced the stories as “wholly untrue,” and successfully appealed to Judge R.D. Wright to reconvene a grand jury to investigate the reports. Kazen did acknowledge that there were homosexuals on the streets of Laredo but only four, and two of them were outsiders who had only recently moved to town.

Feb 19: Georgia establishes a state censorship board. The Dews Censor Bill, named for sponsor Rep. Charlie Dews (D-Calhoun), establishes a three member Georgia Literature Commission. During the House debate, Dews placed a half dozen books and magazines containing photos of scantily-clad women on his desk. “I know this doesn’t affect any of you young fellows in the House,” he says with a laugh. “And it shouldn’t affect any of you old fellows. But I want you to do something to help protect our boys and girls from filthy, trashy reading material that they can walk in and get for prices ranging from 15 cents to 35 cents.” The House passed the bill unanimously on February 3, and the Senate did the same on February 12. Radio stations, newspapers and other publishers lobby Gov. Herman Talmadge (D) to veto the bill, but he turns aside those arguments and signs it into law. The Commission, chaired by Atlanta’s Morningside Baptist Church pastor James P. Wesberry during its entire 20-year run, is the first state censorship board in the United States..

Feb 20: French-Canadian flight attendant Gaëtan Dugas is born in Québec City, QC (d. Mar 30, 1984). In 1987, there years after his death, he will be unjustly reviled as the so-called “patient zero” of the North American AIDS epidemic.

Feb 24: The Foreign Ministers of six Western European nations meeting in Rome agree in principle to begin working towards a single European market by the progressive elimination of customs barriers. The six nations — France, Italy, West Germany, Belgium, Luxembourg, and the Netherlands — are already members of the European Coal and Steel Community and the European Defense Community. 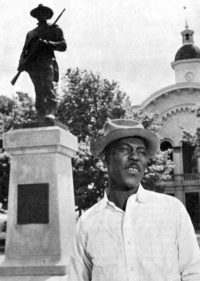 Feb 25: The North Carolina Supreme Court unanimously reverses the conviction of Matt “Mack” Ingram, an African-American tobacco farmer. Ingram had been convicted in November of of assault, allegedly by “leering” at Willa Jean Boswell, a seventeen-year-old white girl, from a distance of sixty feet. The all-white jury took only 58 minutes to convict the father of nine under a law that provides that no actual physical contact is necessary to prove assault. The Supreme Court rules that Ingram could not be convicted “solely for what may have been in his mind” when he looked at the girl in a cornfield. “It cannot be said,” rules the court, “that a pedestrian may be assaulted by a look, however frightening, from a person riding in an automobile some distance away … There was here no overt act, no threat of violence, no offer or attempt to injure.”

Feb 27: Temple University professor and author Dr. Barrows Dunham invokes the Fifth Amendment and refuses to answer any questions before the House Un-American Activities Committee. HUAC has started an investigation into purported Communist infiltration in the nation’s educational system. Dunham refuses to answer any questions beyond his name, birth date and place of birth. Temple University will suspend him three days later. Dunham will be cited for contempt of Congress in 1954. Despite his acquittal for contempt in 1955, Temple University will refuse to reinstate him, and Dunham will be effectively blacklisted from academia until 1971. 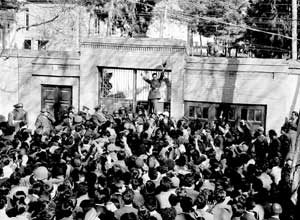 Feb 28: Iran’s Prime Minister Mohammed Mossadegh is forced to flee his house in his pajamas by a mob that had crashed through the front gate. The mob is enraged over reports that Mossadegh is forcing the Shah to leave Iran. Those reports come after the government announces that the Shah is leaving “for health reasons.” Bazaar merchants, former army officers, and supporters of Ayatollah Abol-Ghasem Kashani, the Majlis speaker who was once a Mossadegh ally and is now a bitter foe, rampage through the streets shouting, “Death or the Shah!” At 9:00 p.m., the Shah announces in a radio broadcast that he is not leaving Teheran after all. Mossadegh, who has taken refuge in the parliament building, demands another vote of confidence within forty-eight hours. Rioting will continue for another three days.