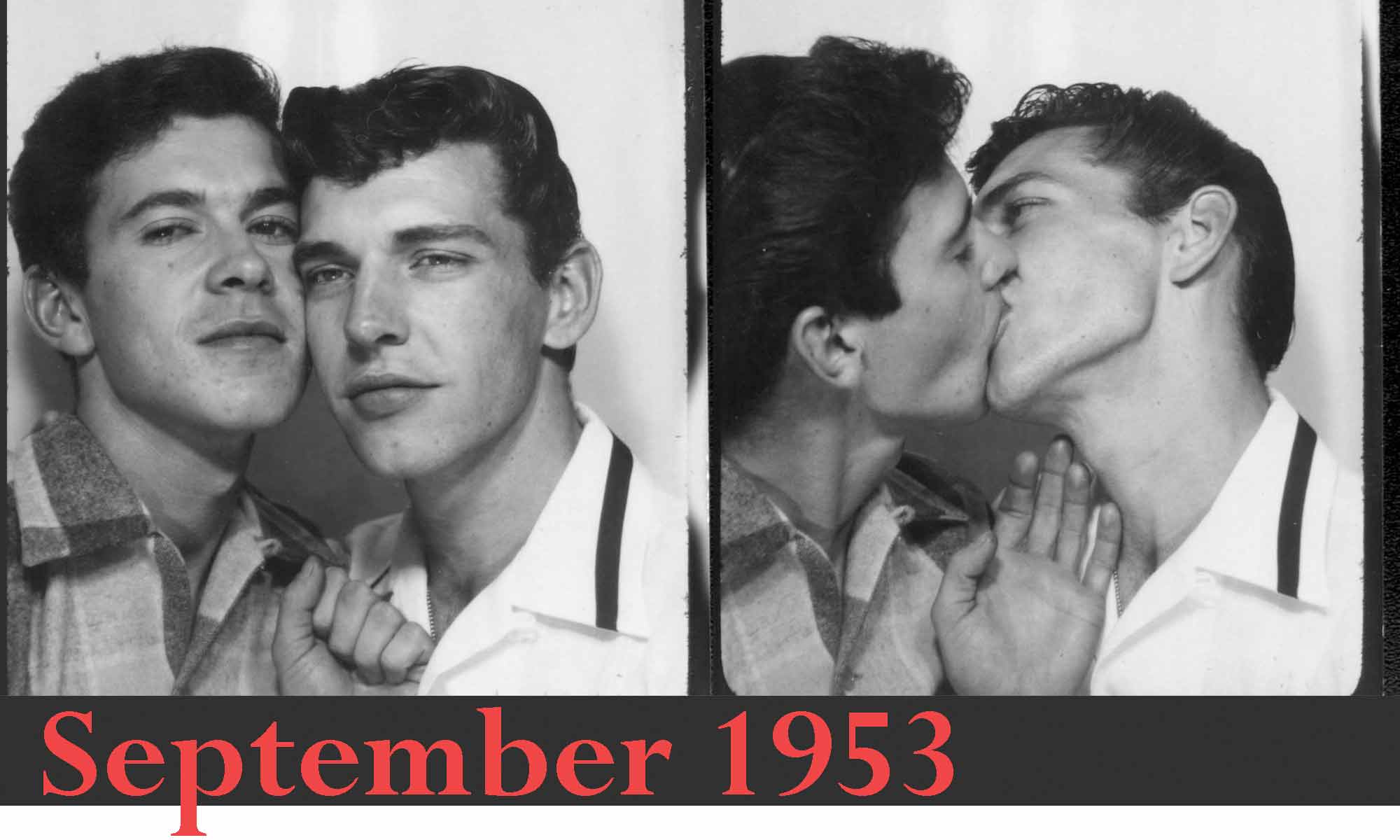 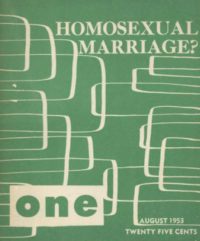 Sep 2: The Los Angeles Post Office halts deliveries of ONE magazine. ONE’s August issue, with its cover story on “homosexual marriage,” apparently attracts the Los Angeles postmaster’s attention, who impounds the deliveries without notifying ONE. ONE discovers the holdup when subscribers call ONE’s office to complain about missed deliveries. Postal authorities refuse to discuss the case with ONE’s attorney, and when when the Post Office finally releases the impounded copies on September 18, it does so without any further explanation. The incident will become the subject of a ONE editorial printed on the cover of its October issue.

Sep 3: California Gov. Earl Warren (R) announces that he will not seek a fourth term as governor next year. He is silent on his next move will be after his term ends in January 1955, but one White House source says that Warren could be named to the U.S. Supreme Court when the next vacancy occurs. Warren has been governor since 1943. 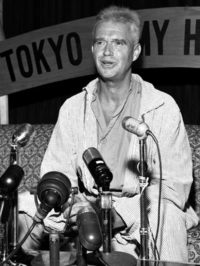 Sep 4: Maj. Gen. William F. Dean, former commander of the U.S. 24th Infantry, is released after three years as a prisoner of war. Dean is the highest-ranking prisoner of the Korean War. After brief celebrations in Seoul, he will be flown to Tokyo to receive treatment for amoebic dysentery.

Sep 5: President Eisenhower authorizes a $45 million grant to Iran’s new government. This is in addition to technical and military assistance that the U.S. had been providing for the past several years. 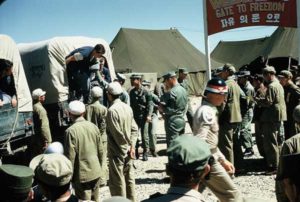 Sep 6: The United Nations and Communist armies in Korea complete Operation Big Switch with the last exchanges of prisoners of war. Since August 5, the Communists have released 12,753 POWs; 7,842 are South Korean, 3,597 of them are American and 1,314 from other nations including Canada, Britain, Turkey and Australia. The U.N. released 70,158 North Korean and 5,639 Chinese prisoners. The U.N. is still holding 15,000 Chinese and 8,000 North Koreans prisoners who say they don’t want to be repatriated back to their home countries. Those POWs will be turned over to a neutral five-nation commission who will ensure that these POWs are acting on their own free will. 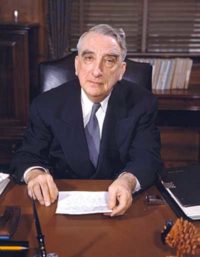 Sep 9: The United Nations command in Korea demands that the Communists account for 3,404 allied prisoners, including 2,410 South Koreans and 944 Americans, believed to have been captured in the Korean war but not yet returned. The list of names was compiled from those mentioned in Communist radio broadcasts, previous Communist POW lists, letters received from North Korean prisons, and eyewitness accounts from freed POWs.

Sep 11: The House Un-American Activities Committee releases testimony by Joseph Zack Kornfeder taken last July. Kornfeder, who said he worked at the Communist Party’s headquarters in Moscow until 1934, told HUAC that 600 Protestant clergy are secret party members, and another 2,000 are “pretty close to the machine.” In addition, he estimates that 3,000 to 4,000 others are “among the fellow-traveling category.” The testimony was taken in four closed sessions on July 7 and 8 in New York, and July 13 and 14 in Washington, D.C. 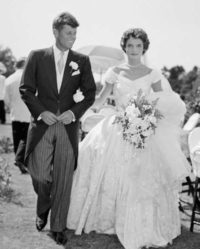 Sep 13: The Central Committee of the Communist Party in Moscow elects Nikita Khrushchev as its First Secretary. The Central Committee also approves a sweeping agricultural plan he designed to improve production. The two announcements occupy the first four pages of the government newspaper Izvestia, and the party newspaper Pravda. Premier Georgi Malenkov is still the official head of government, but Khrushchev now wields vast power as party head. Kremlinologists debate whether Khrushchev takes orders from Malenkov, or vice versa.

Sep 13: A hero’s welcome for a returning Prisoner of War turns suddenly chilly when rumors sweep through the coal mining community of Benham, Kentucky, that Staff Sgt. Jack Flanary was a Communist sympathizer. The day started out well: ten thousand line the main road in a town of 3,500 to greet him. The parade featured three marching bands, 200 cars, Boy Scouts, Girl Scouts, the Lion’s club, and the governor of Kentucky. At Benham’s stadium, a speaker’s platform and honor guard were set up. But at the last minute, the governor, the mayor and the leaders of the Veterans of Foreign Wars and the American Legion all decided to withhold their special awards and left the stage. Said John Bucini, a local VFW leader, “(The rumor) reached us on the speaker’s platform, and because of the doubt, we felt we should not make the presentation.” The honor guard was dismissed, and Bucini said he would have dismissed the color guard but retained it “in respect for the crowd.” The crowd either didn’t hear the rumors or refused to believe it. The pooled contributions and presented Flanary with a check for $510.36 (about $4,800 today). After the news hit the papers, the VFW did some backtracking. Following a meeting the next day, Bucini says, “The consensus of opinion was that there was no evidence that Sgt. Flanary was a progressive.” 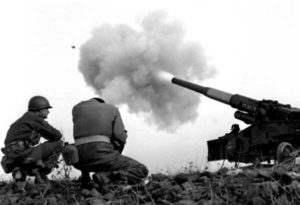 Sep 15: The U.S. announces that it will send six atomic cannons to West Germany to bolster NATO’s defense of Western Europe. The 280-mm mobile cannon and its custom-made vehicle weight eighty-five tons and can fire an atomic shell twenty miles. It was successfully tested at the Nevada Test Site last May. It is not clear whether the cannons sent overseas are equipped with nuclear shells. The cannons are also capable of firing conventional shells. 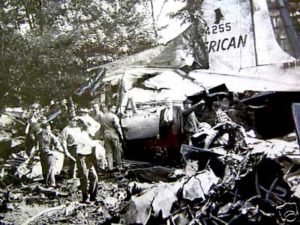 Sep 16: All twenty-five passengers and three crew members of an American Airlines Convair 240 Propliner are killed when their plane hits two radio towers in dense fog near Albany airport. The flight from Boston had been circling in a holding pattern while waiting for the fog to lift before landing. The plane crashes into a field and bursts into flames near a trailer court next to the busy Albany-Schenectady highway, missing a trailer in which a mother was bathing her 11-month-old son by thirty feet. 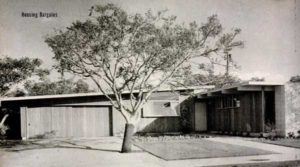 Sep 20-27: The National Association of Home Builders hosts its 1953 National Home Week, with 8,000 open houses in 250 communities across the country. NAHB has been working feverishly to put a dent into the post-war housing shortage as millions of veterans marry and embark on the Baby Boom. Those young families with young lifestyles want homes to match: modern ranches with fresh, modern finishes — what will later become known as “Mid-Century Modern.” During National Home Week, homebuyers snatch up spacious new ranches in the Houston suburb of Jackson Lake for $10,000 ($94,000 today); charming Bill Smith homes in Los Angeles for $8,700 ($81,500 today); and stylish Eichlers in Palo Alto for an eye-popping $22,500 ($211,000 today). Buyers in Lima, Ohio, have their choice of ranch style ramblers, Cape Cod revivals, or a new home design by F.E. Makley and Son in a style they call “the A-Bomb House with the Mushroom Look” — a rather extravagant description of the flat roof’s unique shape. (It doesn’t catch on; the house will become Max L. Makley’s family home.) 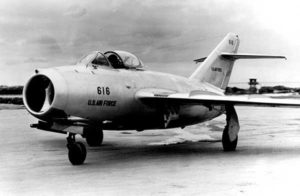 Sep 21: North Korean Air Force Sr. Lt. No Kum-Sok defects to South Korea in his MiG-15bis and lands at the Kimpo Air Base outside of Seoul. After being taken into custody and debriefed, No receives a $100,000 reward (about $940,000 today) from Operation Moolah for being the first pilot to defect with an operational MiG, although he says he didn’t know about the reward when he decided to defect. His MiG is the newest, most advanced version of the feared jet fighter, more advanced than the one delivered by a Polish Air Force pilot in March. Five of No’s Air Force commanders and fellow pilots, including one close friend, are executed in retaliation. No will emigrate to the U.S. in 1954, anglicize his name to Kenneth H. Rowe, and become a U.S. citizen. His MiG is on display at the National U.S. Air Force Museum  at Wright-Patterson Air Force Base near Dayton.

Sep 25: New York City conducts its third and largest civil defense drill in a simulated atomic bombing. When sirens sound at 9:30 in the morning, taxi drivers pull over, trucks stop where they are, as do busses and private cars. Everyone goes to the nearest designated shelters and the streets are deserted within two minutes. One police officer says the quiet in Manhattan was “really loud.” Lt. Gen. Clarence R. Hubner, State Civil Defense Commission director, singles out the thousands of school children who moved to shelters. “Some kids might have been killed in a real raid,” he says, “but most of them would have been saved because of plans to get them to sheltered places.” The drill simulates two fifty-kiloton bombs, about one and a half times the force of Hiroshima’s. One is “dropped” in Manhattan, and the other in Queens. Civil defense planners estimate that 1,084,08 would be killed in Manhattan, Brooklyn and Queens, and a half a million more wounded. 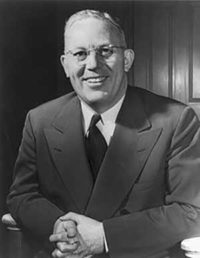 Sep 30: President Eisenhower nominates California Gov. Earl Warren to become the next Chief Justice of the Supreme Court. The popular three-term Republican governor had already announced that he would not seek a fourth term. There have been rumors since March that Warren was interested in a high court appointment, along with rumors of a bending resignation. Chief Justice Fred Vinson’s death, less than a week after Warren’s decision not to run again, had made Warren’s nomination all but inevitable.