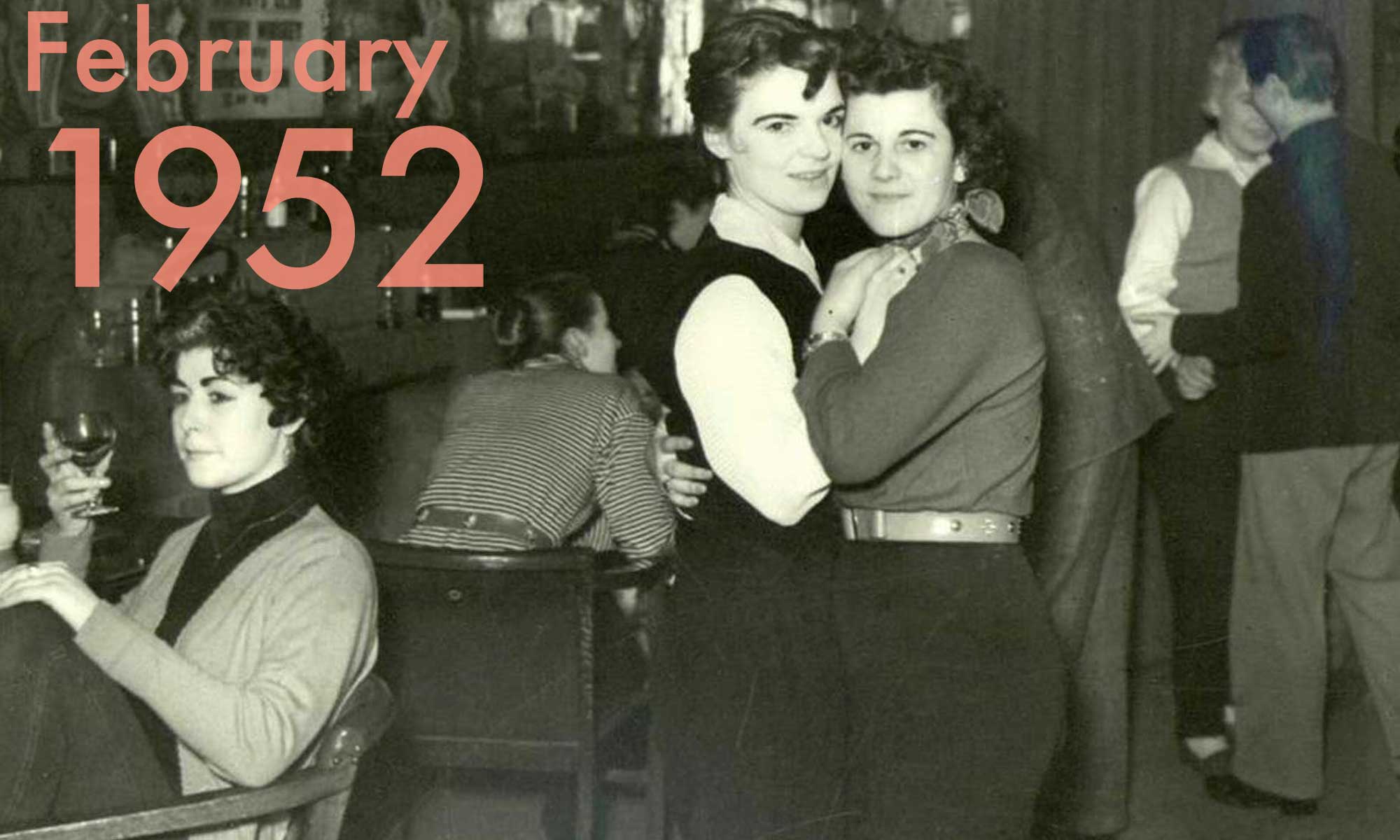 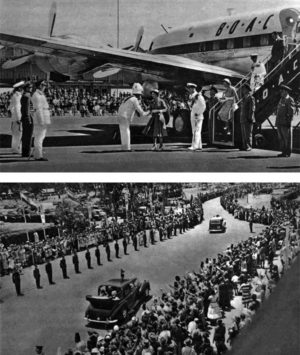 Feb 1: Princess Elizabeth and Prince Philip arrive in Nairobi airport after an all-night flight from London. Nairobi is the first stop on the couple’s five-month royal tour that will also take them to Ceylon (Sri Lanka), Australia and New Zealand. After welcoming ceremonies at the airport, the couple are driven past enormous crowds along the roads to Government House where they attend a garden party reception. After a few days in Nairobi, the couple will have a chance to relax at Sagana Royal Lodge and the Treetops Hotel at the foot of Mt. Kenya. 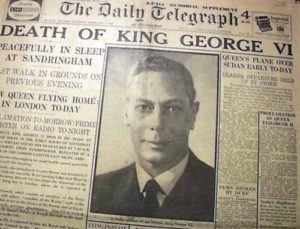 Feb 6: King George VI of the United Kingdom dies at the age of 56 after a long struggle with lung cancer. His daughter, the Princess Elizabeth, Duchess of Edinburgh, who is on a visit to Kenya, hurries home. All of Britain comes to a stop, with Parliament suspended, theaters closed, BBC domestic radio and television shutting down for the day, and the lights of Piccadilly Circus dimmed for the first time since the war. 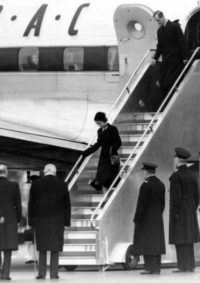 Feb 7: Princess Elizabeth arrives in London and is proclaimed Queen Elizabeth II of the United Kingdom, at St. James’s Palace, London. She will formally take her oath as Queen the next day and her coronation will be held the next year.

Feb 7: The U.S. Senate ratifies an expansion of the North Atlantic Treaty to allow Greece and Turkey to join NATO. 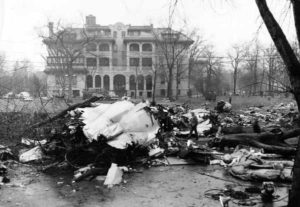 Feb 11: On the very day on which the New York and New Jersey Port Authority schedule a public meeting to explain why they will not close Newark Airport after two deadly plane crashes in five weeks, catastrophe strikes for the third time when a DC-6 airliner crashes into an apartment building in Elizabeth, New Jersey, soon after take-off. The Miami-bound National Airlines flight takes off shortly after midnight and immediately loses power to the number three engine. The pilot mistakenly shuts down the number four engine, causing the aircraft to lose altitude. When it clips the top of the four-story Meltzer Apartments, it causes gasoline to spray onto the building and sets the top story on fire. Four residents, including one young couple and their four-year-old son are killed. The plane comes to rest in front of an orphanage where 100 children are sleeping. Boys from the orphanage rescue several survivors from the plane’s burning tail section. Thirty-three are killed, including the four on the ground. Thirty-four survive, many with severe injuries. All together, 118 people have been killed in airline crashes in Elizabeth in less than two months. The Port Authority immediately announces the airport’s temporary closure. It will reopen in November after a new runway is built directing air traffic away from Elizabeth.

Feb 12: The body of King George VI is lain in state at Westminster Hall. Over the next three days, more than 300,000 mourning subjects will file past to pay their respects. 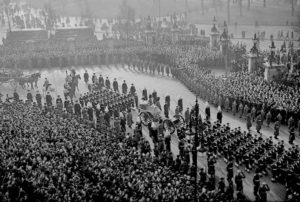 Feb 15: Vast crowds line the route from Westminster Hall to Paddington Station in London for the state funeral of King George IV. The gun carriage bearing the King’s oak coffin is followed by the Queen’s state coach, then the Duke of Edinburgh walking on foot with the Dukes of Kent, Glouchester and Windsor. After them come six gilded coaches carrying British and foreign royalty, followed again on foot with kings, heads of states, princes and other dignitaries from around the world. At Paddington Station, the coffin is placed in a funeral car and the royal party and their guests board the train for the 22-mile journey to Windsor, where the funeral service is held at St. George’s chapel. Afterwards, as George VI’s coffin is lowered into the grave, thousands of flags across Britain return to full staff. 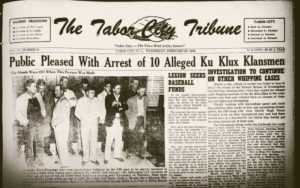 Feb 16: More than 35 FBI agents, working in close coordination with state and local law enforcement officials in Columbus County, N.C., arrest ten Ku Klux Klan members in Columbus County, North Carolina, on charges of kidnapping and assaulting a white woman and white man. The unmarried couple were kidnapped and flogged the previous October by men in full Klan regalia and given lectures on morals. The incident was part of a series of similar kidnappings, floggings, and mailed threat in the community of Fair Bluff for a variety of alleged transgressions, including drunkenness, failure to attend church, failure to support families, and, in one instance, “laziness.” State and local officials will arrest dozens more over the next three months on state kidnapping charges for several other incidents. Two local newspapers, the Tabor City Tribune and the Whiteville News Reporter, are credited with bringing the Klan’s activities in the area to the FBI’s attention. The papers will win the Pulitzer Prize for Meritorious Public Service for their persistent reporting under nearly continuous threats since 1950.

Feb 17: British Prime Minister Winston Churchill announces that the United Kingdom has an atomic bomb and will test it in Australia later in the year. Britain will become the world’s third nuclear power.

Feb 27: The New York Times reports that psychiatrists have concluded that children with “retarded intellectual development” may be the result of deep personality problems in the mothers, “even though in some cases the mothers prefer to attribute retardation to physical rather than emotional causes.” The Times says: “Though the mothers appeared to be well-intentioned persons ‘functioning within normal limits in the community,’ they also had many emotional problems, the study showed. It seemed that unconsciously the mothers desired their children ‘not to learn’ because, as the children improved, the mothers showed ‘marked resistance’.” In another study of children who bang their heads, researchers conclude that “the mothers of the head-banging infants tend to want to do everything for the infants… this seems to stimulate the child to a performance the mother does not control.” A third therapist attributes the cure of a nine-year-old boy’s stuttering to getting his anger out at his mother. These findings are presented at the annual convention of the American Orthopsychiatric Association in Atlantic City.

Feb 28: American composer and lyricist William Finn is born in Boston, MA. His musical Falsettos which win 1992 Tony Awards for Best Original Score and Best Book of a Musical.

Feb 28: Iran’s fiscal woes become increasingly dire due to the loss of oil revenues after the country nationalized British-owned Anglo-Iranian Oil Company’s facilities in Iran. Lacking AIOC’s worldwide technical, marketing, financial and transportation capabilities, the oil-rich country has not been able to sell a drop since June. The cash-strapped government announces that it is now stripping government offices of Persian carpets and selling them to raise money. They are also selling 1,0000 government automobiles.