Never before had homosexuality been such a hot topic. And never before have so many politicians been so eager to mark themselves as experts on the evils of homosexuality. One of them was Rep. Arthur L. Miller (R-NE), a Congressman of middling renown. The man from Kimball, Nebraska, focused mainly on farm issues. When he ventured beyond the barbed wire fence, the Plains conservative denounced the New Deal, socialism, and school text books he thought were insufficiently harsh on Communism.

He also dabbled in public health issues. The biggest accomplishment to date for the humble Congressman came in 1948, when he proposed and got Congress to pass what became known as the Miller Act. A sex crime panic was sweeping the country at the time, and his measure sought to solve the problem, at least within the District lines of the nation’s capital. In the days before Home Rule, Congress was the city council, and legislators from Bangor to Barstow had exclusive say on local policies and legislation whenever they thought they knew better.

And when it came to sex crimes, Miller thought he knew better. His sexual psychopath bill authorized the U.S. District Attorney to initiate commitment proceedings against anyone who demonstrated a “lack of power to control his sexual impulses.” The person needn’t be found guilty of a crime. He didn’t even have to be charged. But under the Miller Act, he could still find himself involuntarily committed to Washington’s St. Elizabeth’s Hospital until the superintendent determined that the individual is “sufficiently recovered.” These indeterminate commitments, depending on the whim of the hospital’s superintendent, could wind up being far longer than the criminal penalty the person might be subject to if he had been convicted.

The Miller Act wasn’t unique. States across the country were busy enacting similar legislation. Virginia had just enacted one on April 7. These laws supposed to “help” — actually, incarcerate — child molesters, peeping toms, flashers, and the like, sometimes without a trial or an attorney. In practice, they also swept up cross-dressers, transgender people and homosexuals, with no regard as to whether they actually posed a threat to anyone.  By 1950, the Miller Act detained at least two “non-coercive homosexuals and one aggressive sodomist” in the District. 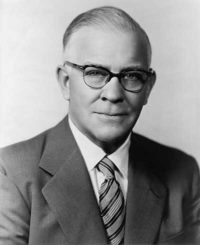 On May 3, Miller was the featured speaker at the annual Nebraska State Medical Association convention at the Cornhusker Hotel in Lincoln. The title of his talk was, “How Safe Is America?” Miller warned that the Democrats were pushing federal aid to medical, dental, and nursing schools, all “definite steps to socialized medicine.” He also criticized McCarthy for saying there were 57 Reds in the State Department. Miller didn’t think that was true. But he implied that where there was smoke, there might be fire. “You can be sure of one thing though,” Miller said, “if there were anything in the loyalty files to prove McCarthy wrong, the administration would show them to the committee.

In his preliminary remarks, he said that he was convinced that “I know more about the practice of medicine and surgery than I know about the practice of being a Congressman.” If that were true, then bless his little heart. Because when he got around to educating his audience about homosexuals, he made an unusually absurd claim: “It is found that the cycle of these individuals’ homosexual desires follow the cycle closely patterned to the menstrual period of women. There may be 3 or 4 days in each month that this homosexual’s instincts break down and drive the individual into abnormal fields of sexual practice.”

When Miller returned to Washington, he had his entire speech placed in the Congressional Record. What follows is the portion of that speech where Miller imparts his vast expertise on homosexuals.

In further exploring the subject of how safe is America, I wish to examine with you the number of subversives and security risks which are now, or have been, employed in the Federal Government. Mr. Peurifoy, the Under Secretary of State, testified before a Senate Committee recently that they found it necessary to fire or let resign 257 employees last year, and that 91 of this group were homosexuals. The Police Department of the District of Columbia estimates that there are about 5,000 homosexuals in the city and 75 percent are employed by government.

I discuss this subject of homosexuality with some timidity. In looking over the literature on this topic, I find that it is seldom approached, even by the psychiatrist, and, being first a surgeon, and second a politician, I find it difficult to explore. I will direct my remarks to their employment in government, plus a brief review of this problem.

Homosexuality can be defined as the attraction for individuals of the same sex to each other. The subject is as old as the human race. It is mentioned in the Bible, was recognized by the ancient Greeks, and is practiced extensively among the Orientals. It is important to note at this point that the Russians and the Orientals still look upon the practice with favor.

Mr. Goering of German fame and General Roehn, who were executed, kept the list of homosexuals for Germany. They also had a list of these individuals in the State, Commerce, and other Departments of our Government. The Russians undoubtedly have similar lists. These espionage agents have found it rather easy to send their homosexuals here and contact their kind in sensitive departments of our Government. Blackmail and many other schemes are used to gather secret information.

The homosexual is often a man of considerable intellect and ability. It is found that the cycle of these individuals’ homosexual desires follow the cycle closely patterned to the menstrual period of women. There may be 3 or 4 days in each month that this homosexual’s instincts break down and drive the individual into abnormal fields of sexual practice. It has been found that if the individual can be given large doses of sedatives and other treatments during this sensitive cycle, that he may escape performing acts of homosexuality.

The problem of sexual maladjustments are most urgent and still far from a solution. In the Army, several thousand men were discharged because of homosexuality. When caught in the act, these men were generally discharged without honor, which means the loss of citizenship and the right to vote, or to belong to any organization of veterans, or to receive many of the rewards which are granted to those who have served honorably. This is most serious. Many of the homosexuals failed to survive the rigors of warfare and the constant intimate association with men. They were painfully aware of their limitations. The majority were unable to conceal their tendencies and were eventually eliminated with disgrace, and a stigma to themselves, their families, and friends.

Jealousy is never encountered in true friendships. Never is the bond which unites two friends such that the acquisition of a new friend by one is regarded angrily by the other; but quite otherwise is the life among homosexuals. Here jealousy reigns supreme. It is similar to the love of a boy for a girl. Male homosexuals will not share their fairy with anybody. His anger is unlimited for anyone who seeks to possess the object of his love.

The sexual attraction exercised by a man on another male may be apparent in many ways. The homosexual will become excited by the mere presence of some man in a public place. They will often approach that man, even though he is a stranger. On streetcars, intimate advances are made. A taxi driver often finds his fare making indiscreet advances. The true homosexual seeks any kind of contact with the male he adores. He has no sensation whatever in the presence of the most beautiful and seductive female. Her amorous advances to him may even be repulsive.

The Bible apprises us of the fact that when the inhabitants of Sodom consorted physically with the angels who descended to the pious Lot, God, in His wrath, entirely destroyed the city. From here comes the origin of the expression “sodomy.” Sodomy is used to designate a certain type of sexual pervert and homosexual.

In the Third Book of Moses (Leviticus), the Lord said to the stranger, “If man lay with mankind as he lieth with a woman, both of them have committed an ·abomination. They shall surely be put to death and their blood shall be upon them.”

Perversion is found at all levels of society. Perhaps more frequently among the higher levels where nervousness, unhappiness, and leisure time leads to vices.

The homosexual takes on many indiscretions. He has a tendency to lie and to lie on all occasions. It is a part of their defense.

Two years ago, as chairman of the Committee on Public Health in the District of Columbia, I sponsored legislation directed at a new legal approach to the sex-pervert problem. There were so many sex crimes in Washington, our parks and loafing places were no longer safe for the citizen. The police blotters of Washington contain the names of many individuals, some prominent, who are repeatedly brought to court for actions of sex perversion. Most of them merely post a $25 collateral and are never brought to trial. Under that law these people may be treated as medical problems, and can receive treatment at the discretion of the court in one of the hospitals of the city. The results are encouraging.

Homosexuals are like birds of a feather — they flock together. Washington has several restaurants and dwelling places in palatial surroundings where these people worship at the flesh pots and cesspools of immoral sex demonstration. Recently the moral squad arrested 40 men in one house, worshiping at the flesh pots of iniquity.

In some respects they are more to be pitied than condemned. Some have a pathologic mind. They might be compared to the kleptomaniac, who must steal, or the pyromaniac, who sets a fire. Seldom a week passes but what Washington and the surrounding territory has several atrocious crimes closely related to sex emotions. It 1s only recently that the press has given some freedom to the open discussion of the topic. The subject is still taboo among family newspapers.

It does seem to me that if we are to keep America safe this type of individual ought not to be permitted to serve in key positions of government. The Congress is writing into several appropriation bills a clause which will permit the secretary of a department to dismiss individuals who might be security risks. It always includes homosexuals.

I have extracted the entire speech as it appeared in the Congressional Record and placed it online here (PDF/1.4MB).

Headlines: Truman’s political prestige suffers when his ally, Sen. Claude Pepper (D-FL), loses the Florida primary. An argument breaks out in the Senate when McCarthy claims his Wheeling speech mentioned only 57 names instead of witnesses’ accounts of 205. Prof. Owen Lattimore, State Department advisor for China and the Far East, is outraged over Joseph McCarthy’s attacks on his wife. A 100-day strike against Chrysler finally ends. 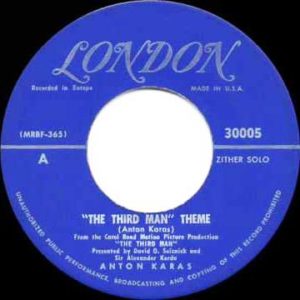 In the record stores: “The Third Man Theme” by Anton Karas, “If I Knew You Were Coming I’d’ve Baked a Cake” by Eileen Barton, “The Third Man Theme” by Guy Lombardo and his Orchestra, “It Isn’t Fair” by Don Cornell and the Sammy Kaye Orchestra, “Music! Music! Music!” by Teresa Brewer, “My Foolish Heart” by Gordon Jenkins, “Sentimental Me” by the Ames Brothers, “Bewitched” by Bill Snyder and His Orchestra, “Daddy’s Little Girl” by the Mills Brothers, “My Foolish Heart” by Billy Eckstine.