Between 1948 and 1951, the Marshall Plan spent an astronomical $13 billion (about $140 billion today) to finance the economic recovery of Europe following World War II. During the 1950 debate for the plan’s reauthorization, Rep. John Vorys (R-OH) offered an amendment requiring that any American employee assigned to the Economic Cooperation Administration (ECA), which administered the Marshal Plan, undergo a background/loyalty check by the FBI. Rep. Arthur L. Miller (R-NE) then offered a further amendment to Vorys’s amendment to prohibit anyone who was homosexual from working in the ECA.

Rep. Miller, a former physician from rural Nebraska, mostly stuck to the issues that interested his humble constituents, and him personally. He hated most of the New Deal except for those parts that benefitted Great Plains farmers — soil conservation, loans and subsidies, rural electrification, and federal programs to eradicate foot and mouth disease and the like. The country doctor also strongly opposed anything that smacked of socialized medicine. He even opposed federal programs designed to support rural hospitals in his own district. He thought local communities could do better without meddlesome bureaucrats.

But at a time when the District of Columbia was directly ruled by Congress, the Nebraska doctor thought nothing about a politician form halfway across the country pushing legislation affecting local residents of the city. In 1948, he drafted a sexual psychopath law for the district, known as the Miller Act. Modeled after several other sexual psychopath laws enacted across the country in answer to a national sex crime panic, the Miller Act allowed the U.S. District Attorney to initiate commitment proceedings against anyone who demonstrates a “lack of power to control his sexual impulses.” The person needn’t be found guilty of a crime. He didn’t even have to be charged. But under the Miller Act, he could still find himself committed to Washington’s St. Elizabeth’s Hospital until the superintendent determined that the individual is “sufficiently recovered.” Which could be far longer than if that individual had been tried and convicted of whatever law that may apply.

The Miller Act and other sexual psychopath laws like it were primarily designed to incarcerate child molesters, peeping toms, flashers, and the like. They also swept up cross-dressers, transgender people and homosexuals, with no regard as to whether they actually posed a threat to anyone.  By 1950, the Miller Act detained at least two “non-coercive homosexuals and one aggressive sodomist.”

Rep. Miller was very proud of this handiwork. So after offering his amendment banning homosexuals from working in the ECA, he drew on his Miller Act cred to explain why his amendment was needed:

Mr. Chairman, I realize that I am discussing a very delicate subject. I cannot lay the bones bare like I could before medical colleagues. I would like to strip the fetid, stinking flesh off of this skeleton of homosexuality and tell my colleagues of the House some of the facts of nature. I cannot expose all the putrid facts as it would off end the sensibilities of some of you. It will be necessary to skirt some of the edges, and I use certain Latin terms to describe some of these individuals. Make no mistake several thousand, according to police records, are now employed by the Federal Government.

I offer this amendment to the Vorys amendment in good faith. Recently the spotlight of publicity has been focused not only upon the State Department but upon the Department of Commerce because of homosexuals being employed in these and other departments of Government. Recently Mr. Peurifoy, of the State Department, said he had allowed 91 individuals in the State Department to resign because they were homosexuals. Now they are like birds of a feather, they flock together. Where did they go? You must know what a homosexual is. It is amazing that in the Capital City of Washington we are plagued with such a large group of those individuals. Washington attracts many lovely folks. The sex crimes in the city are many.

In the Eightieth Congress I was the author of the sex pervert bill that passed this Congress and is now a law in the District of Columbia. It can confine some of these people in St. Elizabeths Hospital for treatment. They are the sex perverts. Some of them are more to be pitied than condemned, because in many it is a pathological condition, very much like the kleptomaniac who must go out and steal, he has that urge; or like the pyromaniac, who goes to bed and wakes up in the middle of the night with an urge to go out and set a fire. He does that. Some of these homosexuals are in that class.

Some of those people have been in the State Department, and I understand some of them are now in the other departments. The 91 who were permitted to resign have gone some place, and, like birds of a feather, they flock together. Those people like to be known to each other. They have signs used on streetcars and in public places to call attention to others of like mind. Their rug and fairy parties are elaborate.

So I offer this amendment, and when the time comes for voting upon it, I hope that no one will object. I sometimes wonder how many of these homosexuals have had a part in shaping our foreign policy. How many have been in sensitive positions and subject to blackmail. It is a known fact that homosexuality goes back to the Orientals, long before the time of Confucius; that the Russians are strong believers in homosexuality, and that those same people are able to get into the State Department and get somebody in their embrace, and once they are in their embrace, fearing blackmail, will make them go to any extent. Perhaps if all the facts were known these same homosexuals have been used by the Communists.

I realize that there is some physical danger to anyone exposing all of the details and nastiness of homosexuality, because some of these people are dangerous. They will go to any limit. These homosexuals have strong emotions. They are not to be trusted and when blackmail threatens they are a dangerous group. The Army at one time gave these individuals a dishonorable discharge and later changed the type of discharge. They are not knowingly kept in Army service. They should not be employed in Government. I trust both sides of the aisle will support the amendment.

Joy to the Homosexuals

Miller’s proposed amendment failed about an hour later, although the House accepted the Vorys Amendment. Shortly after that, the House passed the entire reauthorization bill, with Miller, of course, voting against it. Four days later, he was still smarting from his amendment’s rejection:

Mr. Speaker, yesterday a taxicab driver told me that the homosexuals had quite a celebration on Saturday and Sunday nights. They were celebrating the green light they thought they received from this House because the House turned down the amendment which would have prohibited them from employment with ECA.

That action was taken by almost a straight party vote. It was a small vote, 77 to 66, I do not blame all of the Democrats here today, some of you were not here to vote. I know you who did vote will rejoice with them in their celebration. You gave them the go ahead signal for Federal employment. You did it by almost a straight Democratic vote. Mr. Peurifoy testified there were only 91 whom he dismissed in the State Department. The police department say there are about 7,000 in Washington and about 75 percent of them on the Federal payroll. Not long ago the police raided a house and got about 60 of them in all kinds of orgies. But I think the Democratic majority in the House who voted on a straight party line would want to know about this celebration, because you like to spread joy and sunshine and by your vote did bring joy to the homosexuals now employed in Government work.

Mr. Speaker, a young boy one time called an old lady a hoodlum. She said she did not know what a hoodlum was, but she did not think that boy was paying her a compliment. I am just a little like that old lady. I do not know what homosexuals are but I never saw anybody get as much free advertising in the Congress of the United States in all of my life. I do not see any sense in it.

Mr. Speaker, the gentleman from Missouri seems to be critical of the fact that certain groups are getting a lot of unfavorable free advertising. Well, may I say to the gentleman you have had these unmentionable individuals in the departments; it is your fault, you have been in control of the executive departments here for 13 or 15 years. For the last 10 years practically everybody in Washington knew about all this disreputable, dirty, nasty bunch on the Federal pay roll which is now, at last, being exposed, getting what the gentleman calls free advertising. Now the gentleman objects to their being exposed. If he wants to take them home and live with them, all right; but you have no right– You have no right, I say, to keep those dirty, nasty people on the Federal pay roll, and use the dollars of decent citizens to pay them. Maybe the gentleman likes them; I do not; neither do my people.

Rep. Christopher challenged Hoffman, “Can you tell me what a homosexual is?”

If Hoffman knew, he wouldn’t say. “The term needs no definition — I will not dirty my mouth by defining it.”

Headlines: President Truman denounces three Republican Senators (Joseph McCarthy, Kenneth Wherry and Styles Bridges) as saboteurs of American foreign policy over loyalty charges. Secretary of State Dean Acheston says he doesn’t remember meeting Prof. Owen Lattimore, the China policy expert denounced by McCarthy as a Communist. The House strips a clause from the Marshall Plan reauthorization bill denying funds to Britain unless it ends the partition of Ireland. The House approves the Marshall Plan’s $3.1 billion reauthorization through 1951. Residents of Hot Springs, New Mexico, vote to change their town’s name to Truth or Consequences to lure the popular radio program by the same name to air its tenth anniversary program from the town. 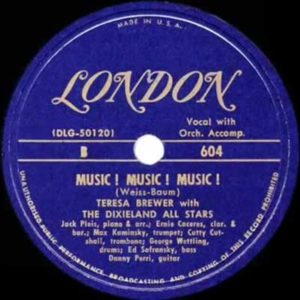 In the record stores: “Music! Music! Music!” by Teresa Brewer, “If I Knew You Were Coming I’d’ve Baked a Cake” by Eileen Barton, “Chattanoogie Shoe Shine Boy” by Red Foley, “There’s No Tomorrow” by Tony Martin, “It Isn’t Fair” by Don Cornell and the Sammy Kaye Orchestra, “I Said My Pajamas” by Tony Martin and Fran Warren, “The Third Man Theme” by Anton Karas, “Go To Sleep, Go To Sleep, Go To Sleep” by Mary Martin and Arthur Godfrey, “The Cry of the Wild Goose” by Frankie Lane, “Rag Mop” by the Ames Brothers.

New York Times best sellers: Fiction: The Wall, by John Hersey, The Egyptian by Mika Waltari, The Parasites by Daphne du Maurier. Non-fiction: The Mature Mind by H.A. Overstreet, This I Remember by Eleanor Roosevelt, I Leap Over the Wall, by Monica Baldwin.