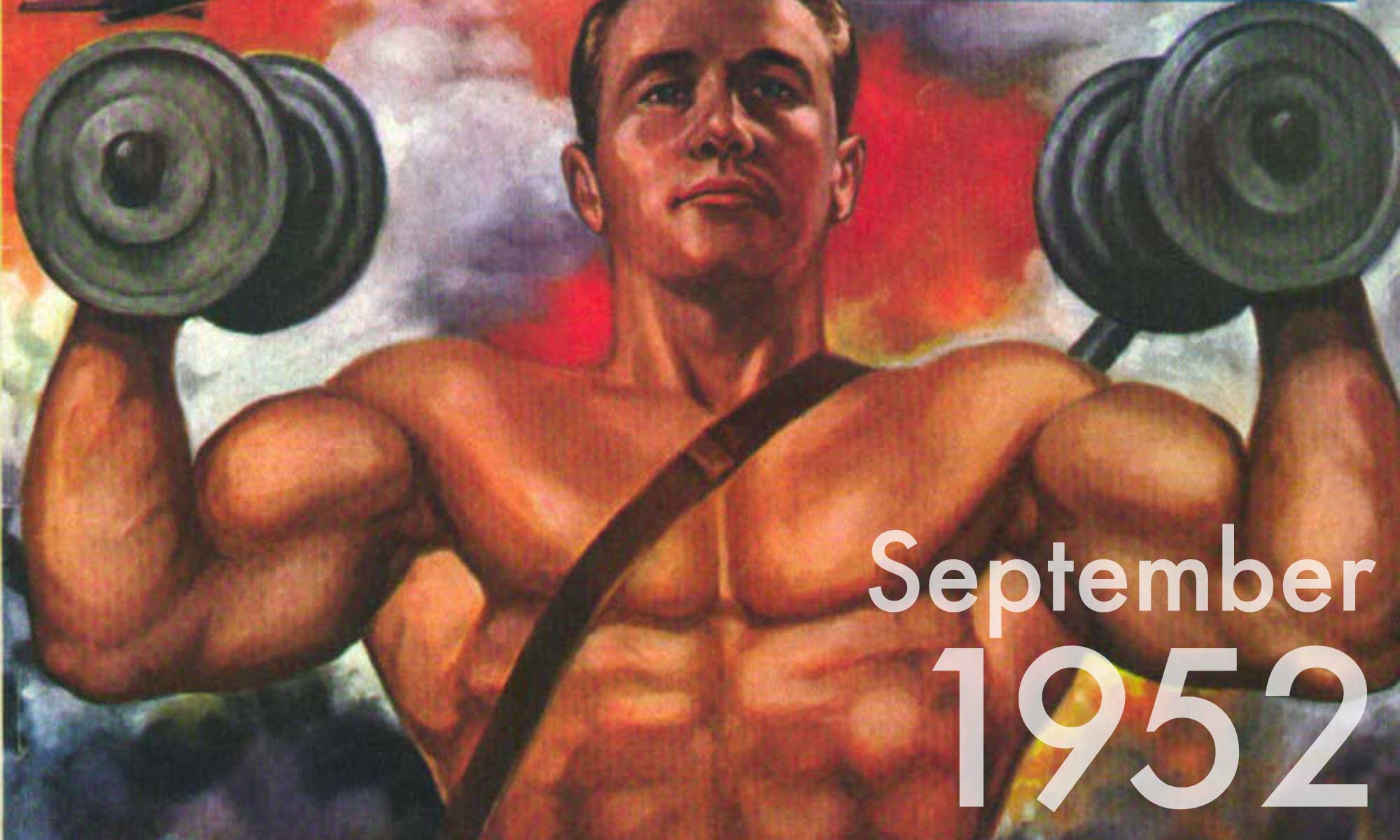 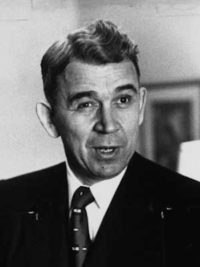 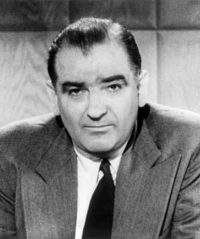 Sep 7: McCarthy Claims Credit for Removing 145 “Deviates” from State Department. In 1952, McCarthy published a book titled McCarthyism: The Fight For America, in which he laid out his crusade to rid the country of “Communists and perverts.” As part of his book’s promotion, McCarthy answers several question from the editor of the Milwaukee Sentinel. McCarthy accuses several State Department employees by name of harboring Communist sympathies and takes credit for their ouster. He also takes credit for the removal of 145 “deviates.” 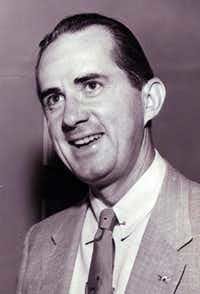 Sep 9: A Southern revolt against Democratic presidential candidate Gov. Adlai Stevenson accelerates when Democratic Texas Gov. Allan Shivers, in a speech before the Democratic State Conventions, says he will will support Republican candidate Gen. Dwight D. Eisenhower. “We can and should let it be known,” says Shivers, “that when the contest is between Trumanism and Texas, we choose Texas.” The convention approves a resolution urging Stevenson voters to “reconsider their actions and actively support Eisenhower and Nixon.”

Sep 13: American singer Randy Jones is born in Raleigh, NC. He will be the “Cowboy” from the Village People.

Sep 13: Jo Stafford’s single “You Belong to Me” begins its five week run at number one.

Sep 18: The New York Post, a partisan Democratic tabloid, alleges that a “millionaires’ club” in California has set up a so-called “slush fund” to  pay for Nixon’s continuing political expenses following his 1950 election to the Senate. In fact, the fund was not much different from other political action funds in use by other candidates. Nixon’s fund however had several important safeguards, including contribution limits set at $500 (about $4,700 today), the contributors’ names being kept secret from Nixon, and the fund’s activities audited via a public trust. But the New York Post’s story, titled, “Secret Rich Men’s Trust Fund Keeps Nixon in Style Far Beyond His Salary,” claims that it is a “millionaire’s club devoted exclusively to [his] financial comfort.” It sets the tone for other wire service stories appearing across the country, and plunges the Eisenhower-Nixon ticket into its most serious crisis of the campaign season. Democratic National Chairman Stephen Mitchell immediately calls on Eisenhower to remove Nixon from the ticket and that all details of the fund be made public. 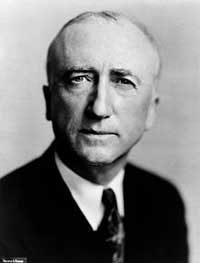 Sep 18: South Carolina’s Democratic Gov. James F. Byrnes, who once served as Truman’s Secretary of State, announces that he will vote for Eisenhower for President. Byrnes cites Stevenson’s support for an anti-discrimination Federal Fair Employment Practices law and limits to the Senate filibuster. “If you want more of the Truman Administration,” says Byrnes, “You should vote for Governor Stevenson. If you have had enough, you should vote for Eisenhower.” 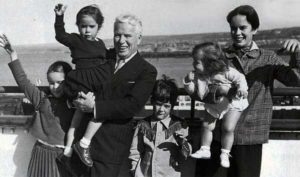 Sep 19: The day after Charlie Chaplin and his family boarded the RMS Queen Elizabeth to travel to London for the premiere of his film Limelight, Attorney General James P. McGranery revokes Chaplin’s re-entry permit. McGranery says Chaplin, a British citizen, will have to answer questions about his political views and moral behavior in accordance with the recently enacted McCarran-Walter immigration law if he wants to re-enter the U.S.

Sep 19: Nixon answers reporters question about the “secret millionaires’ fund” by denouncing the story as “an attempted smear by the same left-wing elements which have fought me ever since I took part in the investigation that led to the conviction of Alger Hiss. …If they think that by such tactics they can slow up my attack against communists and corruption, they will find out differently.” Press reports hint that Eisenhower’s advisers are considering whether Nixon should be dropped from the ticket. Later in the evening in Kansas City, Eisenhower says “I have worked with and have confidence in Senator Nixon.” Eisenhower also reveals that the fund’s trustee will release “a complete accounting of the fund and its uses.”

Sep 20: The New York Herald Tribune and the Washington Post publish editorials demanding Nixon’s resignation from the campaign as details of the so-called “secret millionaires’ fund” emerge. The fund had totaled $18,235 ($172,100 today) rather than the $16,000 figure given earlier. Contributors include a who’s-who of Southern California businessmen: an oil magnate, an automotive heir,  a Savings and Loan president, and Herbert Hoover, Jr., the former president’s son. An accounting of expenses reveal the usual for a political fund: stationary, travel expenses, radio and television spots, postage, office help, meals, and so forth. Telegrams to the Eisenhower campaign indicate that the fund’s existence is a huge embarrassment; one of his campaign’s talking points had been to sweep corruption from the nation’s capital. That now looks cynical. Eisenhower releases a statement saying that when the final report of the fund’s expenditures is released, it must be “as clean as a hound’s tooth.” It had to be not only legal, but fully above board — “or else.” The “or else” is seen as a direct shot fired at Nixon.

Sep 21: Eisenhower speaks to Nixon by telephone for the first time since the fund scandal unfolded three days earlier. It is a strained conversation, in which Eisenhower urges Nixon to go ahead with a televised address and lay out his entire financial history since entering politics. Nixon asks, “General, do you think that after the television program that an announcement could then be made one way or another?” Eisenhower waffled, saying that he hoped none would be necessary. Nixon responds: “There comes a time in matters like this when you have to shit or get off the pot.”

Sep 22: Nixon cuts short his whistle-stop tour of the West Coast at Portland and returns to Los Angeles to prepare for his television address the next day. 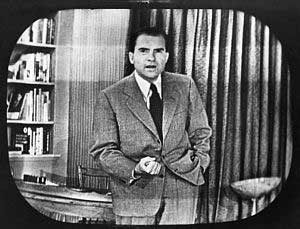 Sep 23: Nixon gives a nationally-televised address to refute the charges made by the New York Post that he was living a life of luxury thanks to a purported secret millionaires’ slush fund. Nixon explains to the sixty million who tune in — the largest television audience so far — that his finances were modest, at best. “I own a 1950 Oldsmobile car,” he said. “I owe $4,000 to the Riggs Bank in Washington, D.C., with an interest at 4 percent. … I owe $3,500 to my parents …” Wives in mink coats is a common cultural shorthand for corruption, and Nixon uses it. “I should say this, that Pat doesn’t have a mink coat. But she does have a respectable Republican cloth coat and I always tell her that she would look good in anything.” He acknowledges receiving one gift though. “A man down in Texas heard Pat on the radio mention the face that our two youngsters would like to have a dog. And, believe it or not, the day before we left on this campaign trip we got a message from Union Station in Baltimore saying they hqd a package for us … It was a little cocker spaniel dog in a crate… Our little girl, Tricia, the six-year-old, named it Checkers. And you know, the kids love the dog and I just want to say this right now, that regardless of what they say about it, we’re going to keep it.” 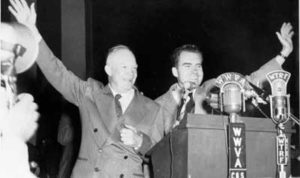 Sep 24: A flood of telegrams pour into the Republican National Committee at the rate of 4,000 per hour following Nixon’s “Checkers” speech. With more than 75,000 messages tallied by 5 p.m., those supporting Nixon run about 200 to 1. When Nixon and Eisenhower meet at a campaign rally in Wheeling, West Virginia, Eisenhower says Nixon has been “completely vindicated” of charges in connection to a political action fund. Eisenhower announces that all 107 members of the Republican National Committee had voted for retaining Nixon on the ticket.

Sep 27: Democratic presidential nominee Adlai Stevenson bows to pressure following Nixon’s “Checkers” speech and says that he and his running mate, Alabama Sen. John Sparkman, will make public their tax returns for the past ten years. They challenge Eisenhower and Nixon to do the same. The move marks the start of a longstanding political tradition of presidential candidates releasing their tax returns for public scrutiny. The tradition will remain unbroken for the next 64 years until 2016, when Republican presidential candidate Donald Trump refuses to release his returns.

Sep 29: The House Un-American Activities Committee opens a round of hearings in Los Angeles. Author and screenwriter Roy Huggins is the first to testify. He says that he joined the Communist party because of his dislike of fascism, but dropped out in 1947. He names nineteen others who he says were party members. Because of his cooperation, he is free to continue his career without further hinderance. 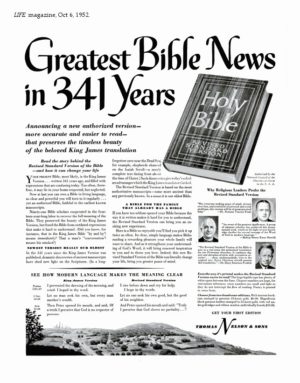 Sep 30: The Old Testament of Revised Standard Version of the Bible is published by the Division of Christian Education of the National Council of Churches. This follows the New Testament, which was first published in 1946. Thomas Nelson & Sons print one million copies for its first printing. Eight thousand people rally in Washington, D.C. and another ten thousand celebrate in Pittsburgh. More rallies are held in 300 cities and towns throughout the country, and the first printing sells out immediately. The RSV is sponsored by forty Protestant and Eastern Orthodox denominations, but it draws criticisms from the International Council of Christian Churches which represents fundamentalist sects. The deuterocanonical books (the Apocrypha) will be published in 1957 at the request of the Episcopal Church. The RSV is a revision of American Standard Version of 1900-1901.