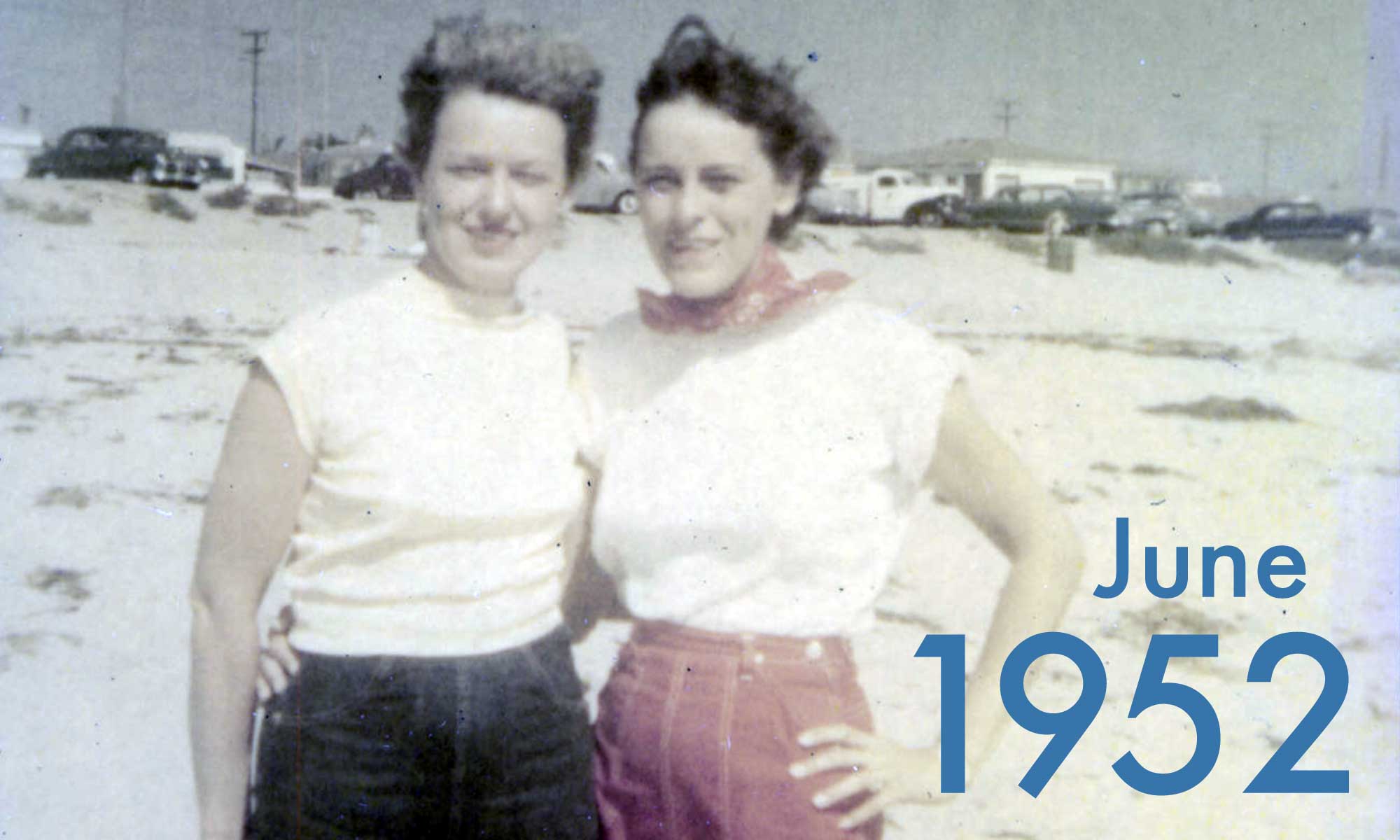 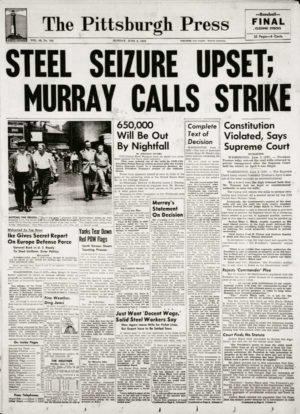 Jun 2: The U.S. Supreme Court rules 6-3 that President Truman’s seizure of the steel mills to avert a strike violated the Constitution by usurping the powers of Congress. The steel mills revert back to private ownership. Within the hour, United Steelworkers of America president Philip Murray calls a strike which shuts down the entire industry. The government immediately orders a halt to steel deliveries to manufacturers of  consumer goods in an effort to conserve it for defense needs.

Jun 6: American actor and playwright Harvey Fierstein is born in Brooklyn, NY. He will win a Tony Award for Best Actor in a Play for his own play Torch Song Trilogy, and another Best Actor Tony in a Musical for playing Edna Turblad in Hairspray. He will also win another Tony for Best Book of a Musical for La Cage aux Folles.

Jun 7: The United Nations delegation walks out of the deadlocked Korean truce talks in Panmunjom, forcing a three day recess. Senior Allied delegate Maj. Gen. William K. Harrison tells the North Korean and Chinese negotiators that he will return to Panmunjom on June 10 “or at a later date if the Communists so desire.” He says that the Allies are fed up with Communist stalling and propaganda “drivel.” The only remaining issue standing in the way of signing an armistice is the right of prisoners of war to refuse repatriation. The Communists insist that all POWs held by the allies be returned to North Korea and China whether they want to go or not. The Allies however point out that many of the prisoners are South Koreans pressed into North Korean service when the North occupied large areas of the south. Other prisoners from the North also say they do not wish to return to Communist-held territory.

Jun 9: American photographer Alice Austen dies on Staten Island, New York, at the age of 86 (b. Mar 7, 1866). The amateur photographer was one of America’s earliest and most prolific female photographers, and over the course of her life she captured about 8000 images. By 1950, she was a pauper on Staten Island when her photos were discovered by Oliver Jenson, who was looking for unpublished photos for his book The Revolt of American Women. The publication of her photos in Life and Holiday raised more than $4,000, allowing Austen to move out of the Farm Colony and into a private nursing home.

Jun 10: American troops use tanks, tear gas, and concussion grenades to retake full control of Compound 76 of the U.N. prisoner of war camp on Koje Island. The compound, where the camp’s then-commander Brig. Gen. Francis T. Dodd had been taken captive in May, has been under complete Communist control inside its barbed-wire fences for several months. It takes about 45 minutes for the American paratroopers to retake control, during which thirty-nine Koreans are killed, some of them anti-communists who are executed by pro-communist prisoners controlling the compound. POW leaders in neighboring  Compound 77 say that they will peacefully comply with American orders to evacuate their compound the next day. 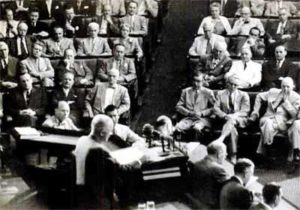 Jun 10: President Truman appears before a joint session of Congress to appeal for authorization to retake control of the nation’s steel mills. The Senate quickly rejects the idea in a 47-32 vote. The Senate then approves a resolution, 49-30, asking Truman to invoke the Taft-Hartley Act whichwould impose an 80-day cooling off period.

Jun 11: Compound 77 of the Koje Island POW camp is peacefully evacuated, but American forces find the bodies of at least sixteen North Korean prisoners of war who had been executed by pro-Communist leaders controlling the compound. 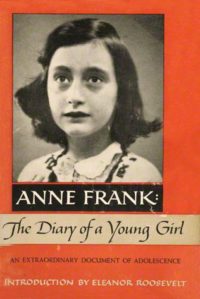 Jun 15: Anne Frank’s Diary of a Young Girl is published in English with an introduction by Eleanor Roosevelt.

Jun 17: The U.N. allies walk out of armistice negotiations at Panmunjom again, forcing another three-day recess in the deadlocked talks. The walkout occurs after North Korean Lt. Gen. Nam Il renews his verbal attack on the “illegal” principle that no war prisoner will be sent back to Communist territory against his will. The Allies have insisted that there will be no forced repatriations.

Jun 19: A British Court in the colony of Aden (later to become part of Yemen) has ruled in favor of the British-owned Anglo-Iranian Oil company in AIOC’s fight to enforce a blockade of Iranian oil from world markets. The court grants a temporary injunction holding a small Italian tanker Rose Mary in the port of Aden under British police guard. The tanker is loaded with 1,000 tons of oil from the nationalized AIOC refinery in Abadan, Iran. AIOC says that it owns the oil that was refined in Abadan, and warns it will prosecute anyone dealing in stolen oil. 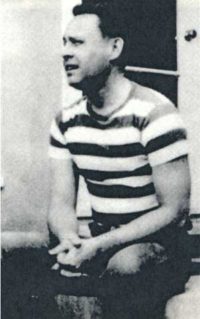 Jun 23: Dale Jennings is cleared of a morals charge despite acknowledging that he is a homosexual. This remarkable feat represents the first significant victory for the fledgling gay rights movement in the U.S. In March, Jennings was arrested and charged with solicitation in a classic entrapment case set up by Los Angeles police. Ordinarily, someone in Jennings’s position would post bail, which he would forfeit by failiing to show up for his trial. Or he’d might just plead guilty and pay a find. But Jennings’s friend, Harry Hay, talked Jennings into pleading not guilty and fighting the charge. Hay and Jennings, who had co-founded the Mattachine Foundation in 1950, hatched the plan. Jennings would admit to being gay, but he would forcefully defend himself against police witnesses. Meanwhile, Mattachine would support Jennings’s legal fight through its Citizens Committee to Outlaw Entrapment, which raised money for Jennings’s defense. They hired George Shibley, an Arab-American lawyer who was well known for taking on controversial civil rights and union causes in the 1930s and 1940s. As Jennings later wrote, Shibley “made a brilliant opening statement to the jury in which he pointed out that homosexuality and lasciviousness are not identical after stating that his client was admittedly homosexual, that no fine line separates the variations of sexual inclinations and the only true pervert in the courtroom was the arresting officer.” The jury fails to reach a verdict after forty hours of deliberation. The city moves for dismissal, and Jennings goes free.

Jun 27: Congress bars homosexuals from immigrating. The Red and Lavender Scares drive the nation’s first major overhaul of its immigration laws when Congress replaces the previous quota system that excluded immigrants based on their countries of origin with new restrictions on those deemed unlawful, immoral, diseased, or politically suspect. That last point was the most controversial one. Truman called it un-American and an absurdity. Other opponents argued it would block refugees from Communist countries. But few Senators and Representatives from either party dared to vote against it in a contentious election year. When Congress passed the McCarran-Walter Act, Truman vetoed it on June 26. The very next day, the House overrides his veto in a 278 to 113 vote, and the Senate follows suit with a 57 to 26 vote. For the next four decades, a provision of McCarran-Walter barring “aliens afflicted with psychopathic personality, epilepsy, or a mental defect” will be used to prevent homosexuals from visiting or immigrating to the U.S.

Jun 27: The U.N. allies walk out of armistice negotiations at Panmunjom yet again, forcing another three-day recess in the deadlocked talks. The walkout occurs after a fruitless 55-minute meeting in which the Communist negitators angrily insist on the forced repatriation of all North Korean prisoners of war regardless of whether the POWs want to return to North Korea or China. 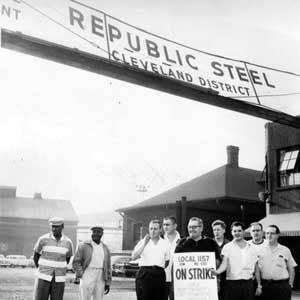 Jun 30: As the steel strike drags on with no end in sight, Ford Motor Company announces that it is shutting down all of its assembly lines at the end of the day, idling 27,500 workers. General Motors has already laid off 38,500 workers due to the lack of steel. Overall, more than 750,000 workers are out of work because of the strike. The workers idled include steelworkers, workers in industries dependent on steel, as well as coal miners, ore miners, railroad workers, and Great Lakes transport workers, all of which supply material to the mills.