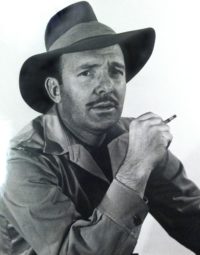 On March 23, 1950, columnist Robert C. Ruark wrote what he knew about “queers” (they “eventually acquire a tendency to hysteria,” for example) and why they shouldn’t be State Department Employees (their behavior leads “ever to blackmail. Always to blackmail.”) And besides that, according to Ruark, “Homosexuals travel in packs,” which means that where you find one homosexual, you’re bound to find ninety-one. He also promised to provide “some case histories tomorrow.”

Ruark styled himself after his idol, Ernest Hemingway. His genuine love of big game hunting in Africa, and his sympathetic views of the African peoples’ struggles against their colonizing masters, helped to cultivate his image as worldly and enlightened without sacrificing his reputation as a swashbuckling adventurist. For his follow-on article, Ruark mined one of his Africa trips for his “case histories.”

Some time back I got on a boat to go to Africa and found it loaded with various State Department appointees to positions of delicate trust in the Near East — the oil country on which our future rests. The boat was also loaded with the Arabs and Egyptians with whom our people must work. The Arabs and the Egyptians almost died laughing at our people.

One executive was an alcoholic. Another, a military attaché, was so flagrantly homosexual that he regaled strangers at the ship’s bar with teary tales about his inability to write his boy friend every day. Still another was so stupid that he made obvious love to an obvious floozie in the deck chairs — and him with a wife and two children aboard.

This was our delegation — a drunk, a homosexual, and a flagrant fool. All going away to work for Uncle Sam. A drunk is a pushover for any kind of blackmail or extortion. So is the homosexual. And the fool is easiest of all to handle. On any given day he leaves himself open to compromise.

When a drunk is in charge of one set of papers and a homosexual is in charge of another and the fool has reign over still another, you don’t really need spies. Any half-stupid private detective, for ten bucks a day, can catch any or all in compromise, and shake him for whatever you wish. Gimme the plots and plans or I’ll turn you in for what you are.

Later on I visited one legation that was a real beaut. The military attaché was just about charming enough to wear a hostess gown in public. The head man was married to a French woman in a place where the French are despised. Nearly everyone I met seemed to be either drunk or homosexual.

The cultural attaché was married to one of the most pathetic women I ever met. She was a violent alcoholic. She was known to have got drunkenly ill at the table at a state function. She hung around bars and picked up strangers — sailors, soldiers and the local natives. She would take off her clothes in night clubs, and dance — solo — barefooted on no provocation whatever. She wept, fought, and passed out publicly. She was a joke with whatever ship hit port.

This is pitiful. This is pathetic. But she was, to my knowledge, condoned for over two years, although the time came when she was no longer asked to state functions. But her husband hung onto his job as our public representative abroad. For all I know he is still at it, which would make a tenure of nearly four years of unabashed derision by the people we pay him to impress with our dignity.

I do not blame this poor dame, nor censure her husband, nor place any personal fault on the drunk, the fool or the homosexuals. But I sure don’t like the idea of having them represent me abroad. Especially in places that swarm with spies, intrigue, and opportunity for easy corruption. The blame is on the permission of one man to rig a whole hierarchy of misfits in the State Department, and on our failure to recognize the rottenness and cut it out after the big sinner was caught and fired by President Roosevelt. That was a long, long time ago.

A government agency abroad is paid for its clean social fingernails and its ability to reflect honestly and pleasantly on the people back home. That’s why you have diplomats. I think it is foolish, therefore, to allow a man whose daughter has been publicly convicted of prostitution to remain as a United States advertisement abroad, despite his innocence, since a well-publicized tart who lives in the consulate lends little tone to Uncle Sam’s operation.

The State Department is largely a lip-service organization — much front, for advertising — and deeply involved in the welfare of our world. It seems awful dumb to put up with drunks and perverts and the husbands of town characters and the parents of prostitutes and fools and knaves when all espionage and checkmate diplomacy turns automatically on the weak link.

On the same day this column appeared in the Washington Daily News, Sen. Joseph McCarthy (R-WI) placed the text into the Congressional Record. At about the same time, Rep. Clare Hoffman (R-MI), a far-right populist from southwest Michigan and an early McCarthy ally, rose in the House to demand an investigation into Ruark’s claims:

My people are just as much concerned about disloyal individuals in Government service as are the people of any other district; but, in addition to that, like practically all Americans they are normal and decent God-fearing people. Some of them tell me, many of them tell me, that inasmuch as these rumors about the immorality of Federal employees in high positions do not seem to have been either investigated or contradicted that they are concerned before they get to the issue of communism or loyalty with this issue of morality and decency.

Let us put it this way: In their own businesses they would not for one moment think of employing a homosexual, not for one moment. Unless I am completely mistaken the people of other districts have the same thought. When giving employment they would never get to the question of loyalty, nor to the question of honesty if this other question arose. They just want none of that other kind. For years, 4 or 5 years anyway, perhaps longer, these stories have been going around Washington. They have been repeated on the floor, not from the well of the House, but from Member to Member, they have been hinted at in newspapers and over the radio at times, yet nothing has been done about it.

Mr. Speaker, we have been spending billions upon billions of dollars to obtain the good will of other peoples and other nations; we have spent billions of dollars in an effort to convince them that our way of life is the right way, the better way, really the only true and good way. Yet we have never, neither the President nor the Congress, nor any of the departments, made any successful public effort to disprove those stories which are circulated and do so much to create a bad impression throughout the world.

I recall when Winchell, in a broadcast after the ’42 election, referred, in effect, to Communists in the House. I tried at that time to have an investigation and have Mr. Winchell called down here and compel him either to admit that he was a liar, or if he had evidence, to show the fact, and if there were such men here, Communists in Congress, then we would expel them forthwith. I could not get action.

Now in view of the fact that this story has been printed in the papers, I think it is time, because we owe it to our people, to either disprove those stories or, if they are true, just get out of the departments; wherever they may be, any individuals who are of that kind or class or nature; and to accomplish that, after I saw that article in the paper, I introduced a resolution to create a committee which would find the facts as to these charges.

How long are we going to sit here and be inactive, when people, for whose actions we are, at least in part, responsible, people who draw their pay because we make the appropriations, are publicly accused of a lack of decency — let us at the moment say nothing about their loyalty — people who, if those stories are true, are nasty, dirty individuals. How long are we to permit them to represent us. Now, how long are we going to take it? That is what I am asking you, my colleagues.

The House did not act on Hoffman’s request.

Headlines: Gen. Eisenhower, after criticizing military budget cuts, is invited to testify before a Senate Appropriations subcommittee. The FBI allows the Senate Committee investigating allegations of spies in the State Department to view files “in the strictest confidence.” 83 Czechs aboard three transport planes defect to West Germany. Riots continue in southern Belgium in protest against the return of King Leopold III.