Back in 1932, in his very second column on the front page of the New York World-Telegram, Westbrook Pegler let it be known that “my hates always occupied my mind much more actively than my friendships… the wish to favor a friend is not so active as the instinct to annoy some person or institution I detest.” His hatreds were many: labor unions, powerful businesses, bosses of every stripe, the wealthy, eggheads, Communists, Socialists, Fascists (or so he claimed), foreigners, Jews, the New Deal, and the Roosevelts, especially Eleanor, who he hated with a particularly obsessive passion. It seemed he could barely write a column without excoriating her somewhere along the way.

“The angry man of the press,” as Pegler was known, made hatred a high art, and he didn’t care who he pissed off. Much like the Trumps and the Hannitys and the Brietbarts of today, he pretended to speak for the common man while carrying the water for the same powerful interests he lambasted.

Oh, and he loved McCarthy. Pegler was part publicity agent and part informer for the Senator from Wisconsin. On March 24, as other columnists were having a field day the prospect of homosexuals in the State Department, Pegler decided it was high time he joined the fray and drag his usual obsessions along for the ride. Like Robert C. Ruark’s column of the day before, Pegler hinted at the 1943 resignation of F.D.R.’s close friend and confidant, Sumner Welles, when he questions whether the State Department’s list of ninety-one homosexuals dismissed since 1947 “include an old family friend of the Roosevelts…” 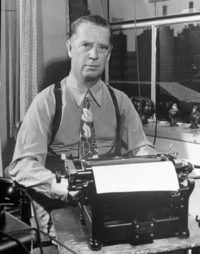 In the history of the United States, no situation ever existed before the long Roosevelt regime which was even comparable to that which was revealed recently by John E. Peurifoy, a deputy under-secretary of state, who testified that 91 homosexuals had been dismissed from the State Department. Homosexual means a person who has relations with another of the same sex. It is common knowledge that such persons have psychic ways of seeking one another. They flock together and are secretive and without honor. They are not beneath shame, however, and this makes them the more dangerous in positions of trust and “delicacy” in a government. Being furtive and ashamed, they are susceptible to blackmail and threats of exposure.

Mr. Peurifoy did not name any of the 91 who were thrown out of the State Department alone. That was only one department. There is no information as to other departments. No reason occurs why the State Department should have been so heavily contaminated and others should not have been equally corrupt. There is no reason to assume. in the absence fo proof, that the 91 who were eliminated from the State Department were, in the English phrase, “the lot of them.” Others may be there still. In the absence of a list one does not know whether Peurifoy’s homosexuals include an old family friend of the Roosevelts whose reputation, rightly or wrongly, because notorious and who finally left, apparently of his own will and in good order. He was a confidant of the royal family and is shown to have been put to the uses of the communists in one conspicuous case.

In a recent broadcast, shamelessly plugging her paltry potboiler, This I Remember, the Empress said of her late husband: “I think he got — I think a great many people that perhaps he never saw but once made an impression on him. He began to learn about people. He began very often with me to meet different people when he was young and I always had lots of queer friends.”

In October, 1920, when Franklin D. Roosevelt was running for vice president under James M. Cox, John R Rathom, the publisher of the Providence Journal and Evening Bulletin, of Providence, R.I., and two other persons were sued in a libel action by Roosevelt. The complaint is on file in the Supreme Court in New York City. It demanded $500,000 on the ground of charges published by Rathom concerning Roosevelt’s attitude toward sailors convicted of sexual perversion when he was Assistant Secretary of the Navy. The article in question charged that degenerates had been returned to active service.

Shearn [former Justice Clarence J. Shearn of the appellate division] and Hare of New York were Roosevelt’s lawyers. Staunchfield and Levy represented Rathom. An affirmative answer was prepared which is still in existence and is cited respectfully by a few lawyers who were given it to study as a great example of that kind of pleading. It never was filed. F.D. Roosevelt’s failure to press his complaint, allowing it to lapse by default, was tantamount to an admission of the truth of the charge that he had been guilty of felonious conduct. One attorney for the plaintiff lat er said Roosevelt was afraid to prosecute his complaint and that, moreover, it had been just a bluff to impress the voters a short time before the election in which Warren G. Harding was elected.

Roosevelt’s complaint said Rathom and the others published a libel in the form of an open letter to him in part as follows:

“In Portland, Ore., you publicly denied the charge by the Providence Journal that you had destroyed or sequestered Navy records. This charge was true. It would be interesting to every officer in the Bureau of Navigation to learn the truth surrounding the disappearance of other papers in the —– case (name deleted by Westbrook Pegler) especially that portion containing your own handwriting, permitting —– to re-enlist. they were abstracted by your personal order and never returned. They were abstracted during your controversy with Captain J. K. Taussig, U.S. Navy, in connection with the charge that you had returned to active service men who had been convicted of crimes involving moral turpitude, so-called graduates of the Naval prison at Portsmouth. With these documents so abstracted you felt safe to falsify the facts and print what you knew to be a deliberate falsehood.

“In the case of Captain Taussig you accused him of falsehood because he did not happen to agree with you on the miserable stand you had taken of sending degenerates back into the service. Out of your mouth you convict yourself of willful and deliberate falsehood. It was your own personal act over your own signature that returned —– and other criminals guilty of unnatural crimes to the service in 1919.

Briefly, Rathom charged that after he had been taxed with this act of returning depraved bluejackets to duty Roosevelt snatched back documents which he had signed for that purpose. Roosevelt and Rathon had charged him with the commission of a felony. Rathom admitted that he had. But Roosevelt never permitted Rathon to present his proof, quietly subsiding instead.

Pegler continued writing for King Features Syndicate until 1962, when he fell out with executives at the syndicate’s owners, the Hearst Corporation. He then found work writing for the John Birch Society’s American Opinion. He lost that job in 1964 because he griped too much about the Jews and Eleanor. He then wrote for the White Christian Council and the anti-Semetic Christian Crusade.

In 2008, the Providence Journal revisited the Newport scandal of 1919-1920, including details about Journal editor John Rathom and his war of words with Roosevelt.

Headlines: Gen. Eisenhower, after criticizing military budget cuts, is invited to testify before a Senate Appropriations subcommittee. The FBI allows the Senate Committee investigating allegations of spies in the State Department to view files “in the strictest confidence.” 83 Czechs aboard three transport planes defect to West Germany. Riots continue in southern Belgium in protest against the return of King Leopold III.