For almost three weeks, Sen. Joseph McCarthy (R-WI) has engaged in a public feud with the U.S. State Department, which McCarthy claimed, without evidence, is riddled with Communists. In a floor speech last week, McCarthy expanded his crusade by charging that eighty-one Communists or “fellow travelers” occupy top positions in the Truman White House. According to McCarthy, those “fellow travelers” include two homosexuals. He acknowledged that the two weren’t Communists, but he claimed that they shared “peculiar mental twists” that tie them “with some of the Communist organizations.” McCarthy equated homosexuality and Communism this way:

Also it is confirmation of what I believe I mentioned earlier this evening when I was talking about one of the top investigators in Washington. I said to him, “Why do you find so many people fanatic about communism? Is there something that is so inviting about it? Is there something mentally wrong?” He said, “You will find if you search deep enough that there is something mentally or physically wrong with every one of them.” There is certainly something wrong with this group (homosexuals). I might say that the new security officer has recommended that they get rid of all that type of individuals regardless of whether they are shown to have any communistic connection or not.

Since, in McCarthy’s view, it no longer matters whether homosexuals have shown any “communistic connection,” the search was on for homosexuals, as well as Communists. What’s more, that search was expanding beyond the halls of the State Department. McCarthy cited a case of a “security risk” who was let go from the State Department and who landed a new job at the C.I.A. This now placed every department, agency and office in the Federal government under the microscope.

On February 27, Bernard L. Gladieux, executive assistant to the Secretary of Commerce, appeared before a House appropriations subcommittee to testify about the department’s security program. When one thinks of classified government work, thoughts mainly turn to areas of defense, diplomacy, and intelligence. But in fact, just about every department had classified work going on under its jurisdiction, and the Commerce Department was no different. The Bureau of Standards had a hand in atomic energy, jet propulsion and guided missile research, and was about to unveil the world’s fastest computer in June. A spy in the Weather Bureau could give an invading army detailed insight into weather patterns in the U.S. The Civil Aeronautics Administration had access to classified aircraft designs and air controller systems. The Census Bureau, the Patent Office, the Office of International Trade, all of which fell under the Commerce Department, possessed detailed information that would be useful to an foreign adversary.

This was supposed to be a routine budget hearing. But budget hearings before subcommittee chairman Rep. John J. Rooney (D-NY) were never routine where increased appropriations requests were concerned. Rooney’s nickname, “The Great Needler from Brooklyn,” reflected his reputation for mercilessly badgering witnesses, especially when they’re asking for budget increases.

The hearing begins cordially enough. Since 1947, says Gladieux, the Commerce department has investigated 369 loyalty cases since March 21, 1947. Of these 273 individuals were cleared, 71 were either fired or resigned, and 25 were still under investigation. Gladieux however pointed out that of the 273 acquitted of disloyalty, 26 have nevertheless been designated as security risks but are still on the payroll, in jobs that do not involve classified material. Another six of the 25 under investigation have been designated as interim security risks. “Even if the adjudication process were to clear those people, we may still continue the security-risk designation on them,” explained Gladieux.

After going over these figures, Rooney suddenly changed the topic: “What is the policy of the Department of Commerce with regard to homosexuals?”

“If we were advised of a case of that kind we would take steps to eliminate him from the service,” said Gladieux. “We would probably first attempt to obtain his resignation, because those kinds of cases are very difficult to find the facts about; they are disagreeable, embarrassing to everyone concerned, and we would therefor attempt to get his resignation as the quickest way to dispose of the case.”

“Do you have any homosexuals employed in classified areas?” asked Rooney.

“Not that I know of,” replied Gladieux. He explained that the only way the department would come across that kind of information would be through an FBI report.

“Has anybody ever sent out a directive addressed to the heads of the various bureaus, all the way down the line, calling for the names of any people suspected of being homosexuals?”

“No,” replied Gladieux. “We have never done that.”

“Do you not think it should be done?”

“I just never thought of it.”

Rooney was incredulous. “If you have 46,000 employees, sitting at the pinnacle as you are, it is very unlikely that there would come to your attention many of these homosexuals, is that not so?”

Gladieux was now about to dig his grave. “Those things are hushed up and handled at the lowest level at which they can be handled. In all my Federal experience…”

Hushed up. Rooney exploded. “Have any been dismissed in the past three years, let us say, because it was discovered they were homosexuals?”

Rooney was incredulous. “Not one?”

“Not that I know of,” repeated Gladieux.

“In the whole Department?”

“No; there have been some, I believe, for other sexual delinquencies, however.”

Gladieux tried to backtrack. “There may have been. I think you will find in most cases of that kind if information comes to the attention of a personnel officer or bureau chief, the first thing they do is to get the man in and demand his resignation. Usually it is forthcoming. I have not had experience with this subject in the Department of Commerce.”

The grilling only got worse from there. Rooney insisted that Gladieux launch a series of investigations aimed at finding those hidden homosexuals. Gladieux however complained that “we are not staffed or equipped to do it.”

“Are you not in control of your organization to the extend where you can get the word around that you wanted turned up any people who were so inclined? … Is it your idea that nothing should be done about it? … Nothing has been done it up to now, isn’t that so?”

Rooney continued: “If (the State Department) has been able to weed out similar cases — and such cases may be very dangerous as far as security is concerned … then why can you not do it in the Department of Commerce?”

Replied Gladieux, “I do not know, Congressman Rooney. I would want to discuss that at length with our personnel people to see how we could get at it. I do not minimize the problem.”

“The story this year is that the Department of Commerce has taken the place of the State Department; that the Department of Commerce is the outfit in Government with people honeycombed with people belonging to the Communist party.” Note the switch: until now, the testimony was focused on homosexuals, not communists. But for Rooney and many of his contemporaries, communism and homosexuality were fully conflated. Rooney continued: “And the danger is that these people will meet other people who might satisfy their desires and, in return, divulge information with regard to the security of the nation.”

Gladieux was eager to get this grilling behind him. “There is no question about it,” he agreed, “that a homosexual or, I would say, any other sexually promiscuous person is at least a potential security risk and we ought to know about it, if there is any way we can find it out.”

The fireworks were more or less over. The hearing continued, with other congressmen peppering Gladieux with questions about the Commerce Department’s security program. When Gladieux’s testimony finally drew to a close, it was Rooney’s turn to sum it all up. He wasn’t happy.

“That is all so much nice language,” said Rep. Rooney. “To me it does not mean a thing. You have come up here this afternoon to acquaint us with the situation in the Department of Commerce. The results have been nil. We have not had the cooperation from you that we have had from the Department of State. You refused to take us into your confidence with regard to these things, and I have tried to handle it in an amicable way so that if questions were raised on the floor we might have the answers to them. You have reacted in the other direction, away from us. So, now we are far apart, and we will have to stay that way. There is nothing that I can see that we can do about it.”

This hearing was held in executive session, and the details didn’t become public until March 20. The headline news was that since 1947, seventy-one people had been fired or forced to quit on disloyalty charges — presumably mostly dealing with allegations of membership with communist or other “subversive” organizations. Thirty-two have been branded as security risks. They’re still on the job although they are no longer allowed access to classified information. Under Civil Service regulations, the Commerce Department is “seriously handicapped” in its ability to dismiss them. Many press reports will note Rep. Rooney’s displeasure at the department’s performance against homosexual, particlarly when compared to the State Department. United Press reports:

Since 1946, Congress had attached a special provision to appropriations bills for the State and Defense Departments giving those department heads “absolute discretion” to fire any government employee if it was “deemed necessary in the interest of National Security.” Known as the McCarran Rider, after Sen. Pat McCarran (D-NV), it was specifically designed to allow the State and Defense Departments to dismiss homosexuals. In the summer of 1950, Congress attached the same rider to appropriations bills for eleven federal agencies, and authorized the President to extend these dismissal powers to the entire federal government.

Feb 13, 1950: Undersecretary of State John Peurifoy denies there are any known Communists in the State Department, but says that 202 employees identified as “security risks” have left the department since 1947. 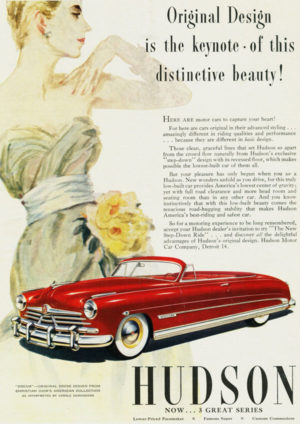 David J. Johnson. The Lavender Scare: The Cold War Persecution of Gays and Lesbians in the Federal Government (Chicago: University of Chicago Press, 2004): 83-84.