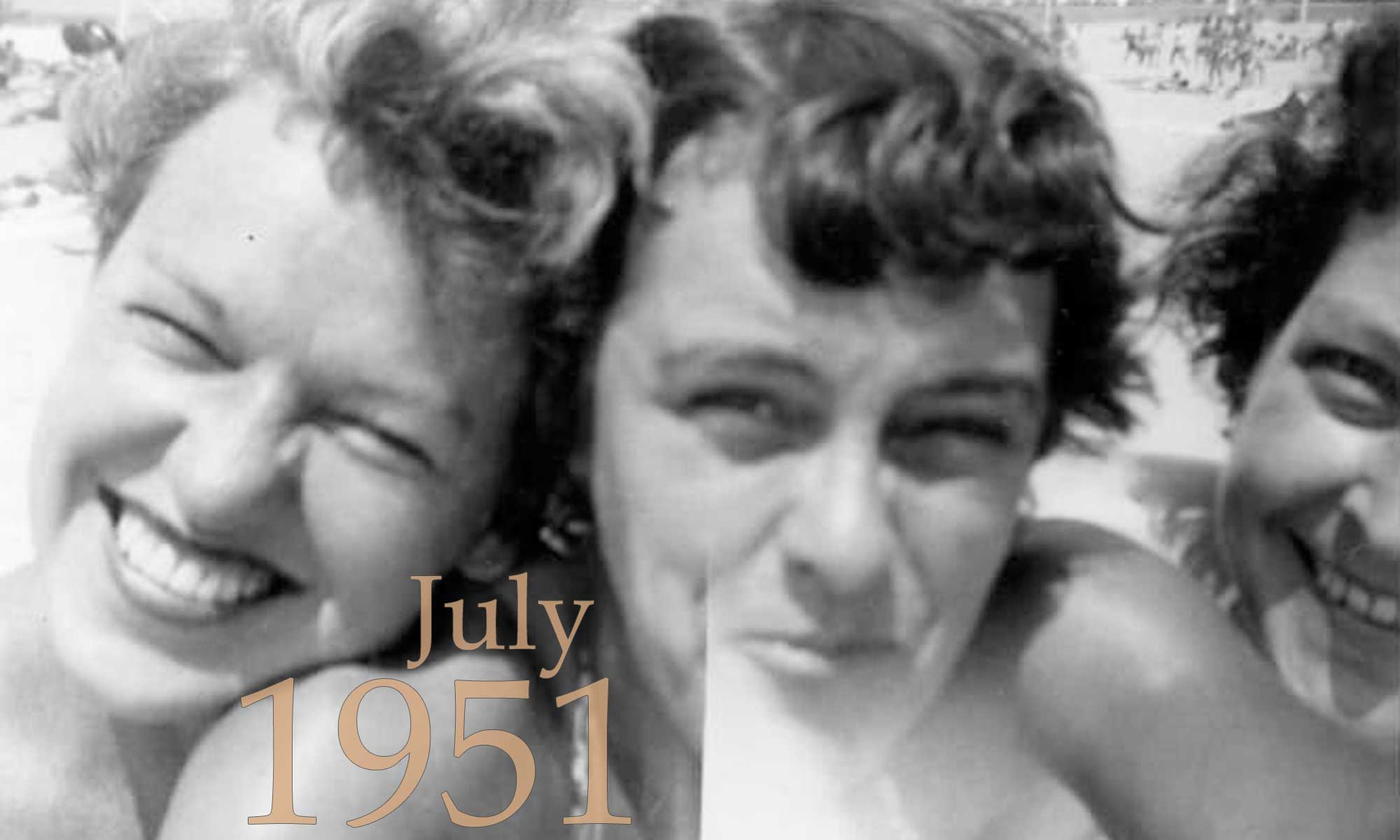 Jul 1: In the continuing Abadan oil crisis, British management of the Anglo-Iranian Oil Company’s massive refinery operations in Abadan have cut production back by 40%. This is done to extend operations by as much as a week before storage facilities reach full capacity. All oil shipments have come to a complete halt now that Iranian authorities have insisted that all oil leaving the port be accompanied with receipts naming the National Iranian Oil Company as the owner and payee rather than AIOC. Meanwhile, about 140 British AIOC employees have arrived in Basra, Iraq, the first step in the eventual evacuation of all 2,800 British technicians and managers from Iran. 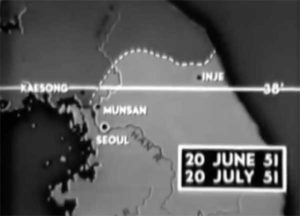 Jul 2: North Korean and Chinese leaders finally agree to begin truce talks in Kaesong on July 10. Despite Kaeson being in North Korean-held territory, the U.N. allies will accept the counterproposal the following day. 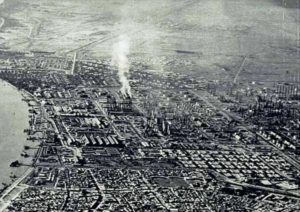 Jul 4: As storage facilities continue to fill up at the world’s largest oil refinery in Abadan, Iran, the British-owned Anglo-Iranian Oil Company shuts down one of the five oil fields supplying the refinery. Management also reduces production at the refinery to one-fifth of its capacity. This comes as all shipments from Iran have stopped and all tankers have been withdrawn from Iran. This will allow the refinery to keep going for a few more weeks. Meanwhile, a steady stream of British employees continue arriving at Abadan from the oil fields as they prepare to return to Britain.

Jul 5: The International Court of Justice in the Hague rules for the British and calls on Iran to return full control of the Anglo-Iranian Oil Company’s properties in Iran to the British firm. Iran rejects the ruling as “an intervention in our internal affairs” and declares it “null and void.” Iran’s stated position is that its dispute is with a private company operating in Iran and is therefore outside of the World Court’s jurisdiction. 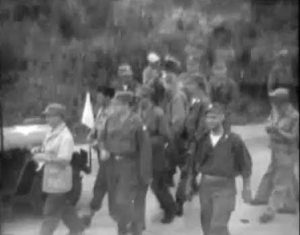 Jul 10: Armistice negotiations to end the Korean war begin at Kaesong. The Communists restrict the number of U.N. representatives permitted to enter Kaesong and ban all Western journalists. They also insist that vehicles entering Kaeson display white flags “for safety.” Throughout the two days of talks, U.N. officials are accompanied by armed Chinese and North Korean soldiers. China broadcasts images around the world appearing to show humiliated, surrendering U.N. officials capitulating to the Communists. 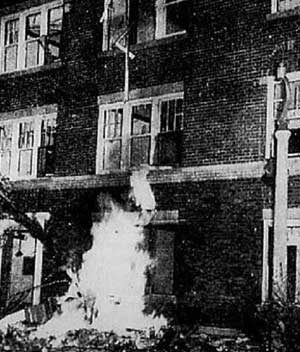 Jul 11-12: Two days of race rioting break out in Cicero, Illinois, just outside of Chicago when an African-American family moves into an apartment building. Fisk University graduate Harvey E. Clark, Jr., had tried to move his family in on June 8, but Cicero police blocked him. Armed with a court order, the family moved in on June 28. On July 11, a crowd of 4,000 whites gather in front of the building. The twenty-one families living living there had already fled. The mob enters the building, tosses all of the Clark’s belongings out of the window, smashes the bathtub, woodwork, doors, windows and walls, and sets fire to the place. The next night, the National Guard is called to restore order, which it does with great difficulty. A Cook County grand jury will refuse to indict any rioters. But they will indict the Clarks’ NAACP attorney, the building’s owner, rental agent and lawyer for inciting a riot. Those charges will be dropped following widespread criticism.

Jul 12: The U.S. and Britain formally announce that they will sign a proposed peace treaty with Japan in San Francisco sometime on the first week of September. The treaty will allow Japan to become fully sovereign, apply for U.N. membership, and pay no cash or material reparations. Japan will renounce its claim over Formosa, the Kuril Islands, South Sakhalin, and several other islands in the Pacific. American chief negotiator John Foster Dulles says, “The treaty is truly one of reconciliation. Never in modern times have the victors in a great and bitter war applied this principle. They have, in the name of peace, imposed discriminations and humiliation which have bred new war. [We] would avoid that great error.”

Jul 12: Gen. Matthew Ridgway suspends truce talks with North Korea and China due to access restrictions placed by the Chinese at Kaesong. The U.N. delegation complains that they are constantly surrounded by Chinese guards, their couriers are interfered with, and that while Western journalists are barred from covering the meeting, Chinese cameramen and photographers continue taking photos that end up being used for propaganda purposes.

Jul 15: W. Averell Harriman, President Truman’s special envoy, arrives in Tehran to try to negotiate an end to the Abadan crisis. Ten thousand protesters shouting “Death to Harriman” take to the streets. More than twenty people are killed and 2,000 wounded in clashes with police. 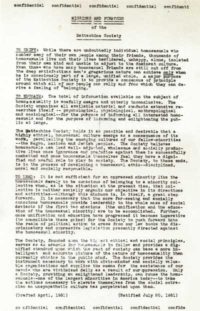 Jul 20: The Mattachine Foundation adopts its first Mission and Purposes. The document is the result of a suggestion made the previous April. Jim Gruber, one of the group’s founders, describes the effort as “a dare” in the face of the McCarthy-inspired Lavender Scare. According to its Mission and Purposes statement, the Mattachine Society proposes to provide “a consensus of principle around which all of our people can rally and from which they can derive a feeling of ‘belonging.'” It also pledges to educate its members so that “a highly ethical, homosexual culture (can) emerge as a consequence of its work.” Only after those two tasks are achieved, according to the statement, can the Mattachine Society begin to ” push forward into the realm of political action to erase from our law books the discriminatory and oppressive legislation presently directed against the homosexual minority.”

Jul 20: King Abdullah of Jordan brings his fifteen-year-old grandson, Prince Hussein, to pray at the al Aqsa Mosque in Jerusalem. Rumors have been circulating in the Arab world that the pro-western King was preparing to make a separate peace with Israel.  As the king and prince are about to enter the mosque, an Arab zealot shoots and kills the king. The assailant then turns his gun on the prince and fires, but the bullet strikes a medal on the prince’s chest. Members of the King’s Guard shoot and kill the assailant. King Abdullah’s son, Talal bin Abdullah, becomes king. Talal is currently in Switzerland undergoing medical treatment following a “general health deterioration which has produced nerve weakness.”

Jul 23: Philippe Pétain, the disgraced former leader of Vichy France, dies in a French prison at the age of 95.

Jul 24: Chris Smith, Baron Smith of Finsbury, is born. The Labour politician will be the first openly gay member of the British Parliament when he comes out in 1984. In 2005, he will become the first M.P. to acknowledge his is HIV-positive.

Jul 25: American commercial illustrator J.C. Leyendecker dies (b. Mar 23, 1874). He is considered one of America’s pre-eminent illustrators of the early 20th century. He is best known for his numerous covers for the Saturday Evening Post and for the “Arrow Collar Man,” a handsome and stylishly dressed character who became an icon for the Arrow Collar line. Leyendecker’s partner, Charles Beach, was the best known model for the Arrow Collar Man. Leyendecker’s illustrations for the Saturday Evening Post, American armed forces recruitment posters, and other commercial clients, often featured an homoerotic aesthetic. Leyendecker dies at his estate in New Rochelle, New York, at the age of 77.

Jul 26: Twelve more members of the American Communist party are arrested and charged with criminal conspiracy to teach and advocate the overthrow of the U.S. government. The arrests target party leaders in Los Angeles and San Francisco. These arrests come almost two months after the U.S. Supreme Court gave its approval to the first wave of prosecutions in  1949. That decision sparked a second wave of arrests and prosecutions under the Smith Act that will see the indictment of sixty-eight second-tier Communists in 1951. 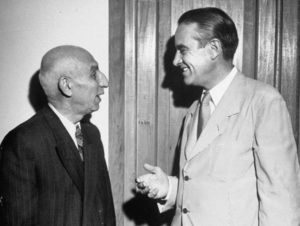 Jul 26: Iran’s Prime Minister Mohammed Mossadegh tells American special envoy W. Averell Harriman that he is prepared to re-open negotiations with the British to find a way out of the Abadan crisis. The crisis stems from Iran’s nationalization of the British-owned Anglo-Iranian Oil Company operations in Iran. Harriman says that Mossadegh now understand that it is impossible to successfully operate Iran’s oil facilities without the AIOC’s vast technical, marketing and transportation networks. But the British government of Clement Attlee is reluctant to accept the offer while intimidation and interference by Iranian authorities against British employees continues. Britain dispatches four more destroyers to the Persian Gulf from Aden, Yemen. They are being positioned near Abadan to protect and evacuate their employees if conditions deteriorate much further. 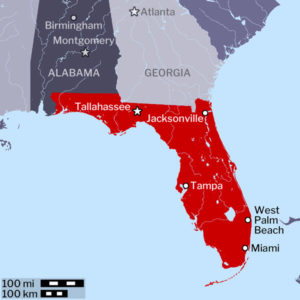 Jul 31: Klansmen hold a rally and cross-burning a few miles west of West Palm Beach, Florida, near the southwest of corner of Okeechobee Blvd and Haverhill Rd. About a hundred people gather to hear Florida Grand Dragon W.H. Brewer, of Sanford, Florida, attack accusers of the klan as “either ignorant, uninformed, or just plain liars.” He also criticizes Gov. Fuller Warren (D), who referred to klansmen as “hooded hoodlums, sheeted jerks and potential murderers.” Brewer says Warren “forgets his declaration to a delegation, of which I was a member, at the Marion Hotel, Okala, on March 19, 1948, when he stated he favored the principle of the klan organization and that all his ancestors believed in the ideals of the organization. But that was in the primary election.” He adds, “We’re not opposed to minorities. We’re just pro-Protestant, native-born American Gentiles.” 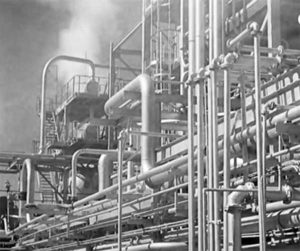 Jul 31: The world’s largest oil refinery in Abadan, Iran has been forced to shut down completely now that all on-site storage tanks have been filled. No petroleum products have left the port since June 22. Meanwhile, four British destroyers arrive off shore of Abadan in the Shatt-al-Arab river which serves as the boundary between Iran and Iraq. They join a fifth destroyer that had already dropped anchor off of Abadan. Three of the destroyers continue upriver to Basra, Iraq, which is about 40 miles (60 km) away. Hundreds of British engineers and technicians line the waterfront and cheer the destroyers’ arrival.