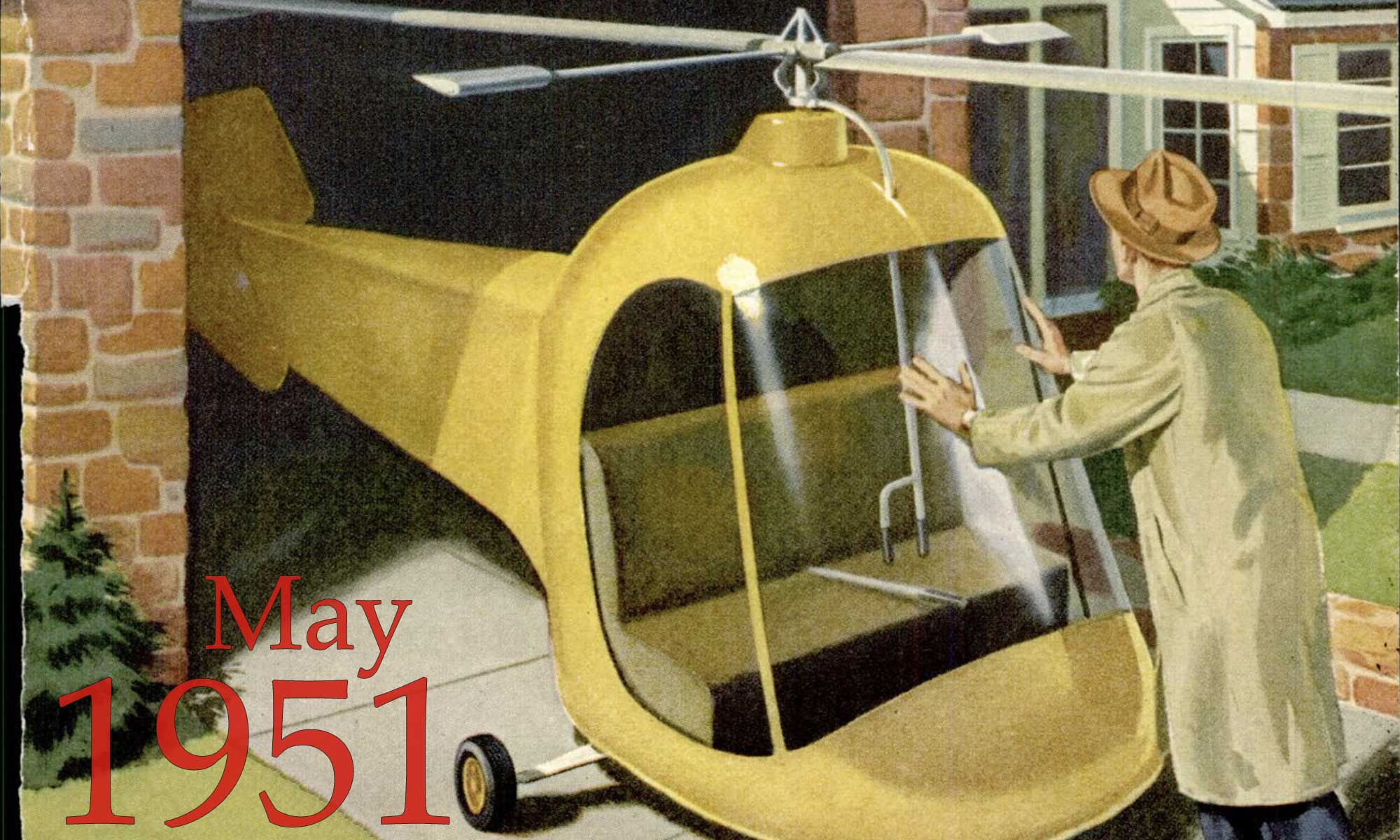 May 2: The Shah of Iran, Mohammed Riza Pahlevi, signs the oil nationalization law which, as passed, is retroactive to March 20. In Britain, Labour Prime Minister Clement Attlee comes under vicious attack for his failure to head of the nationalization of the British-owned Anglo-Iranian Oil Company (AIOC). The British government owns 53% of the company, which represents country’s largest source of foreign profits and provides Europe with 43% of its oil.

May 3: Gen. Douglas MacArthur, former commander of U.N. forces in Korea, tells a joint hearing of two Senate committees that the U.S. should give Communist China an ultimatum to leave Korea or face war against the entire free world. He also says that if the other U.N. allies refuse to go along with the ultimatum, then the U.S. should fight alone. 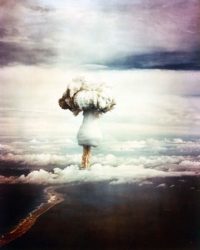 May 9: The U.S. detonates a deutorium core over Enewetak Atoll in the southern Pacific. At 225 kilotons, it is the largest yield to date. But its main purpose is to test the design for a hydrogen bomb. The test won’t be announced until May 25.

May 10: Congressman Steve Gunderson is born in Eau Claire, WI. The Wisconsin Republican will be the first openly gay Republican Congressman in 1994 when Rep. Bob Dornan (R-CA) outs him during a debate over gay-friendly curricula. He will be the lone GOP vote against the Defense of Marriage Act in 1996.

May 13: Iranian Prime Minister Mohammed Mossadegh gives an impassioned speech before the Majlis and says that “dark forces” are out to assassinate him to prevent AIOC’s nationalization. He vows to remain holed up until nationalization has been complete. Meanwhile in Britain, paratroopers have been called back to their base in Aldershot and told to be prepared to “go anywhere” within fourteen days.

May 16: The House Un-American Activities Committee resumes its investigation into Communism in Hollywood with three witnesses refusing to cooperate. Writer Leonardo Bercovici, actor Alvin Hammer and a film studio secretary refuse to answer questions about their alleged involvement in Communist activities. One Congressman tries a different tack. Rep. Charles Potter (R-MI) asks Bercovici, “Are you or have you ever been a member of the Ku Klux Klan?” “No,” answers Bercovici. “You make a distinction,” says Potter. “Is it degrading to say you have never been a member of the Communist party, but not degrading to say you have never belonged to the Ku Klux Klan?”

May 19: Britain warns Iran that any attempt to take control of British properties in Iran would have “the most serious consequences.” The diplomatic note, delivered by the British Ambassador in Tehran, offers to open up negotiations with a Minister of the British Government heading the delegation. The note ends by warning that “a refusal on the part of the Iranian Government to negotiate or any attempt on their part to proceed by unilateral action (towards nationalization) could not fail gravely to impair those friendly relations we both wish to exist and to have the most serious consequences.” A close associate of Iranian Prime Minister Mohammed Mossadegh dismisses the note as “just the same old nonsense. We’ve heard all that before.”

May 22: California adds a consent process to its sterilization law. The law is amended to require full authorization from the patient or inmate before sterilization can take place. It also removes “perversion” as grounds for sterilization. California has led the nation in sterilization, at nearly 20,000 cases, more than a third of all sterilizations performed in the U.S. Now with this amendment’s passage, sterilizations in California will plummet. At the Sonoma State Hospital alone 5,550 patients were sterilized in 1950. In 1952, that number will drop to just four. North Carolina will now take the lead in state-sponsored sterilizations. 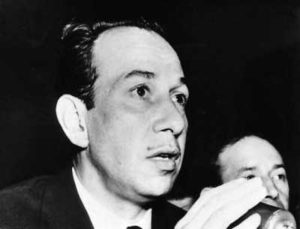 May 22: Actor José Ferrer, testifying before the House Un-American Activities Committee, blames carelessness and ignorance for his sponsorship of several alleged Communist front organizations over six years. He swears he was never a Communist or sympathizer, and says it ought to be outlawed. He explained that he opposed fascism and the relief of distressed people, for example, and when asked to appear at a benefit, he often did so without checking the organizers out. “I can assume the responsibility of ignorance,” he says, “but I cannot assume the responsibility of knowledgeable guilt.” He even acknowledged taking part in a meeting with a group calling for the abolition of the House Un-American Activities Committee, although he now claims that his opinion about the committee has changed since then.

May 24: Film director Frank Tuttle testifies before the House Un-American Activities Committee and acknowledges that he had been a member of the Communist Party for about ten years. When he joined in 1937, he says, the Communists were the boldest organization standing up against fascism at the time. But he says he left in 1947 when it became clear to him that the Communists were little different. He also says that his career came to an abrupt end at about that time. “If employers and producers continue in this manner,” he says, “they will discourage those who also have seen the light and are awaiting their turn to make their contributions to a complete exposure of this menace in Hollywood and elsewhere.” Tanner then tries to salvage what is left of his career. “I believe that there is a traditional dislike for informers,” says Tanner, “but I will be one.” He then goes on to give thirty-six names of directors, screenwriters, and other Hollywood figures, in testimony that the New York Times says resembled that given by director Edward Dmytryk in April. Dmytryk’s testimony paid off; he got a job directing a film three weeks later. Tuttle’s testimony didn’t. Aside from a few films and television dramas in the mid-1950s, his best days were behind him.

May 24: The Iranian Government sets a one-week deadline for the British-owned Anglo-Iranian Oil Company to begin arrangements for effective nationalization of the company’s operations. The note, from Finance Minister Mohammed Ali Varasteh to the company’s chief representative in Iran, warns: “Should you fail to nominate and send your representatives within one week… the Government will have no alternative but to act according to its legal duties…”

May 25: The Atomic Energy Commission and the Department of Defense issue a brief announcement saying that they have successfully completed a series of atomic tests at Enewetak Atoll which “included experiments contributing to the thermonuclear weapons research.”

May 25: Actor José Ferrer returns to the House Un-American Activities Committee to reiterate once again that he was “not a Communist, never has been a Communist, never was in sympathy with their aims, and never could be one.” He repeats that, to the best of his knowledge, he has never met a person he knew to be a Communist, although in some instances he learned about it later. He acknowledges participating in the Joint Anti-Fascist Refugee Committee, the Independent Citizens Committee of the Arts, Sciences and Professions, and a Stop Censorship movement that called for the abolition of the Un-American Activities Committee. Ferrer also explains away his friendship with Paul Robeson. Ferrer says that he had known Robeson though playing in a production of Othello, but they haven’t seen each other for six years. Rep. Donald Jackson (R-CA) finds Ferrer’s testimony hard to believe. “I cannot, frankly, place credence in some of the statements you have made,” says Jackson.  The congressman attacks Ferrer for the “remarkable coincidence” of not reputing the use of his name by any so-called Communist front organizations. “You are connected in the public mind with any organization in which your name is used,” says Jackson

May 25: Britain ratchets up the pressure in the Abadan crisis when the Ministry of Defense announces that the Sixteenth Independent Parachute Brigade Group will sail to the Mediterranean. Their likely immediate destination is the British crown colony of Cyprus. The next day, Britain will ask the International Court of Justice to rule that Iran must submit its dispute with the Anglo-Iranian Oil Company to arbitration.

May 26: American astronaut Sally Ride is born in Encino (Los Angeles), CA (d. Jul 23, 2012). She will become the first American woman in space in 1983 aboard the space shuttle Challenger. Her second space flight in 1984 will also be on board Challenger. She will be the only person to serve on both committees that investigate the Challenger and Columbia space shuttle disasters. 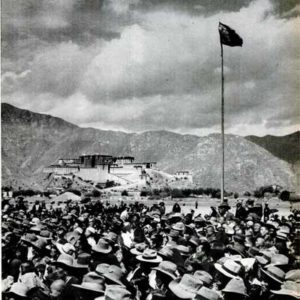 May 27: The People’s Republic of China announces that it has formally annexed Tibet.

May 28: U.N. forces under the command of Gen. Matthew Ridgway push Chinese and North Korean forces back across the 38th Parallel. Advancing U.N. troops trap about 50,000 enemy troops by cutting off their escape routes.

May 30: Iran’s Finance Minister meets with the chief representative of the British-owned Anglo-Iranian Oil Company, and hands him a government document outlining the steps to be taken to during the transition period in which Iran takes over the operations of AIOC. “It was just as I expected,” observed the company’s representative, saying that he was neither more nor less optimistic than before. Meanwhile, a visibly tired Prime Minister Mohammed Mossadegh assures the Majlis that the government was pressing forward with nationalization as quickly as possible. He also rejects Britain’s offer to send an official delegation to Iran to negotiate a settlement. He says that that the nationalization program has nothing to do with the British government, and is strictly between Iran and “the late company.” The British government owns 53% of the AIOC.