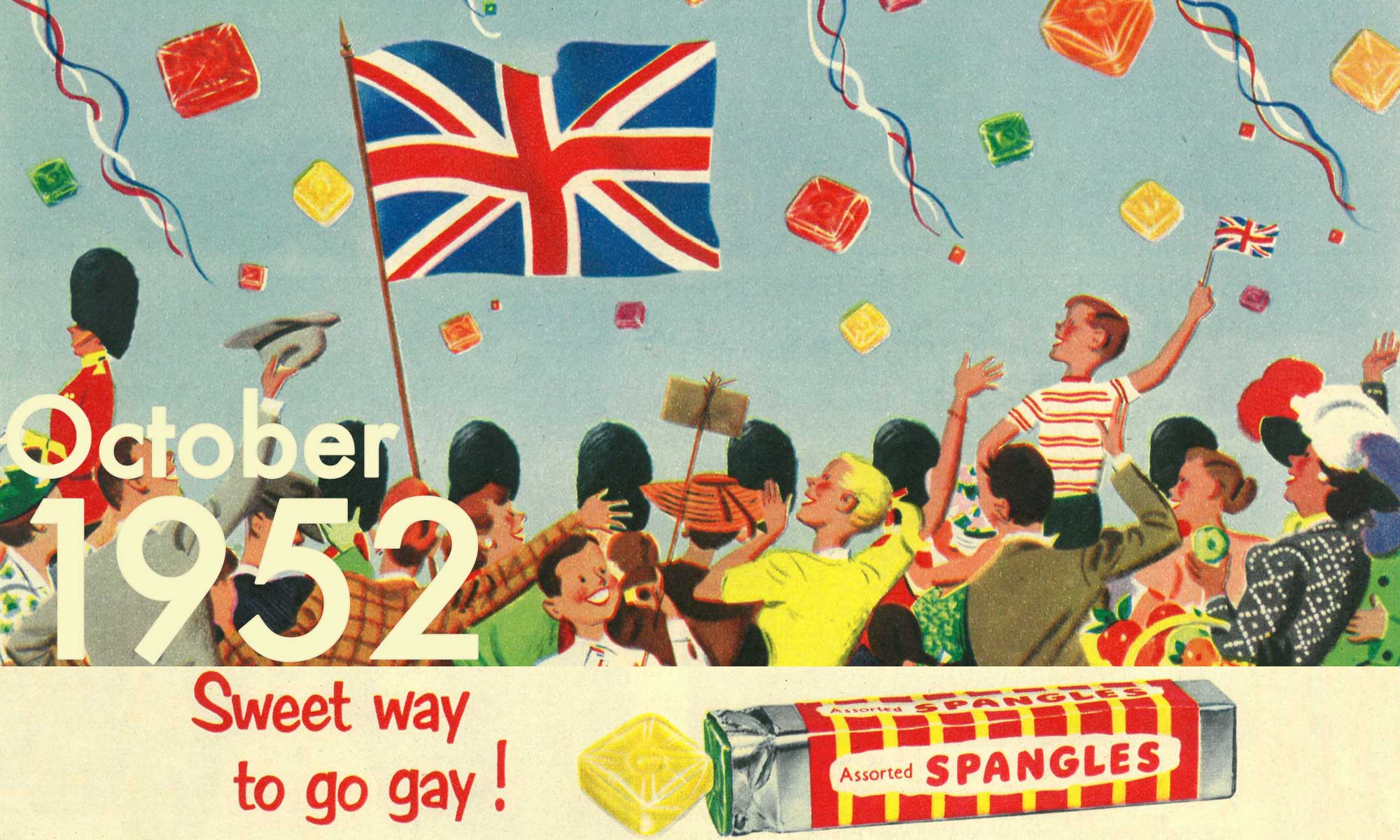 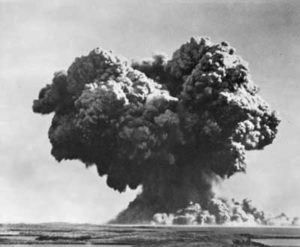 Oct 3: The first British nuclear bomb is detonated in Australia at 9:30 a.m. local time. A plutonium implosion device is set off in the hull of the frigate HMS Plym, anchored in the lagoon of the Monte Bello Islands in Western Australia. The yield is estimated at 25 kilotons, about twice the size of the Hiroshima bomb. Because the detonation takes place 9 ft below the waterline, the mud-laden cloud takes on a cauliflower shape instead of the familiar mushroom. The islands experience massive and severe radioactive contamination. With the success of Operation Hurricane, Britain became the third nuclear power after the United States and the Soviet Union.

Oct 3: Six Southern California health care professionals refuse to answer questions at a Los Angeles hearing of the House Un-American Activities Committee. The four physicians and two dentists challenge the committee’s right to quiz them about their political beliefs. Dr. Alexander Pennes says that he was dismissed by St. Joseph’s Hospital in Orange the day after his name had been mentioned in a HUAC hearing in September 1951. Pennis says the committee is effectively creating a blacklist and banishment from employment. After he calls the committee “the biggest hoax ever perpetrated on the American people,” Chairman John S. Wood (D-GA) replies, “I believe you are a Communist.”

Oct 5: English horror/fantasy writer, film director and visual artist Clive Barker is born in Liverpool, England. He will be known as the writer and director of Hellraiser and the executive producer of Gods and Monsters.

Oct 5: In an off-the-record news conference, Republican presidential nominee Gen. Dwight D. Eisenhower makes the startling disclosure that he has no intention of making his tax returns public. The disclosure comes a week after Democratic nominee Gov. Adlai Stevenson said that he and his running mate were releasing their tax returns and challenged the Republican ticket to do the same. “Why should I dance to someone else’s tune?” asks Ike. When reporters remind him that his press secretary had already said that Eisenhower will release his records, Eisenhower responds that he did not care what his press secretary said and that it was his decision to make. Because the news conference is off-the-record, newspapers will sit on the story until October 10.

Oct 7: The House Un-American Activities Committee wraps up its hearings in Los Angeles with the testimony of Betty S. Selden.  The Russian-born social worker had been working for the Los Angeles County Department of Charities since 1934. Selden’s quiet testimony is in notable contrast to the shouting matches that have characterize other hearings, but she’s no less persistent. She refuses to answer questions about her alleged Communist ties. She will lose her job of nineteen years before the day is through.

Oct 8: U.N. armistice negotiators at Panmunjom declared an indefinite suspension of all truce talks with the North Koreans and Chinese. Truce talks had been suspended on a renewing weekly basis since July due to a deadlock over prisoner exchanges. The North Koreans and Chinese had insisted on the forced repatriation of all North Korean and Chinese prisoners of war regardless of whether the POWs want to return to Communist territory. The U.N. has repeatedly said that it will never agree to forced repatriations. 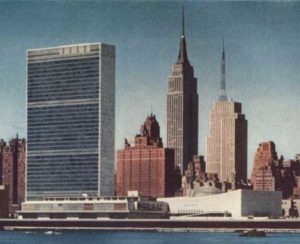 Oct 9: Wallace K. Harrison, Director of planning for the permanent headquarters of the United Nations in New York City, announces the complex’s completion at a ceremony in the General Assembly Hall. The Hall is that last of the three main buildings to be completed. The headquarters consists of the 40-story Secretariat building, the riverside Conference building where the Security Council meets, and the low, domed Assembly Hall. The General Assembly will hold it first session in the Hall on Tuesday.

Oct 10: After newspapers begin reporting that Eisenhower has no intention of releasing his tax returns despite his press secretary’s public assurances to the contrary, Eisenhower makes another partial u-tern and announces that he will release a “financial report as soon as it is completed.” He argues that the Democrats are only interested in seeing his tax returns in order to revive the controversy over the special tax treatment he received for writing his war memoirs, Crusade in Europe. It remains unclear whether Eisenhower’s running mate, California Sen. Richard Nixon, will release his tax returns. The Democratic vice-presidential nominee, Alabama Sen. John Sparkman, has already made his tax returns available to reporters.

Oct 14: Eisenhower’s campaign releases a summary report of his tax returns for the past ten years, but refuses to release the returns. Eisenhower’s executive assistant, Arthur Vandenburg, Jr., also handed out copies of correspondence between Eisenhower and Treasury officials in 1947 and 1948 that resulted in an agreement where Eisenhower would see the earning from his book taxed as capital gains, which is taxed at a much lower rate than regular income. The tax break saved Eisenhower more than $240,000 (about $2.5 million today). Nixon has refused to release his tax returns. 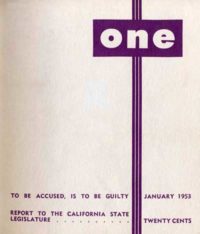 Oct 15: The first nationally-distributed gay magazine is founded. The idea of publishing the magazine takes root when bored Mattachine members in Los Angeles are questioning whether the Society would ever amount to much. Co-founder Dale Jennings said he “didn’t have the patience to sit there night after night and hear everybody whine over and over again how tough it was to be homosexual.” Another member, Dorr Legg (a.k.a Bill Lambert, in whose home they were meeting) agrees. “We were just in a fury and everybody began sputtering: ‘We’ve got to tell them!’ Up speaks this little pipsqueak: ‘Well, you need a magazine.’ It was just like a match to gasoline.” Over the next several weeks, the small clique will settle on the magazine’s name, ONE, suggested by Guy Rousseau, an African-American member who remembers a quite by Thomas Carlyle: “A mystic bond of brotherhood makes all men one.” They also determine the magazine would be professionally designed and typeset; it won’t be just another mimeographed newsletter. ONE will debut in January of 1953. In 1958, ONE will win an important Supreme Court victory when the Court decides that the U.S. Post Office cannot refuse to distribute ONE on grounds of obscenity because homosexual content is not, per se, pornographic.

Oct 16: After Britain forcefully rejected renewed Iranian demands for £49 million (about £1.4 billion today) to settle the eighteen-month dispute over Iran’s nationalizing the Anglo-Iranian Oil Company, Prime Minister Mohammed Mossadegh announces that he is breaking off diplomatic relations with Britain.

Oct 18: Patti Page’s single “I Went To Your Wedding” begins its five week run at number one. 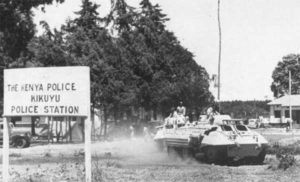 Oct 20: Britain declares martial law in Kenya due to the Mau Mau uprising.

Oct 24: Eisenhower says that if he is elected, he would “forego the divisions of politics” and go to Korea to seek an early and honorable end to the war. “Only in that way could I learn how best to serve the American people in the cause of peace,” he says. “I shall go to Korea.” 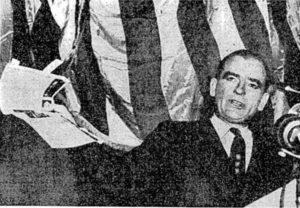 Oct 27: Sen. Joseph McCarthy (R-WI), speaking at a McCarthy fundraising dinner at the Palmer House in Chicago, accuses Democratic presidential nominee Gov. Adlai Stevenson, and virtually all of his close advisors, of being Communist sympathizers and of actively advancing the Communists’ cause. In a speech carried live by radio and television to a national audience, McCarthy denounces Stevenson for “his aid to the communist cause and the extent to which he is part and parcel of the Acheson-Hiss-Lattimore group.”  His “evidence” consists of newspaper clippings, which he dramatically waves before the audience. McCarthy urges a Republican takeover of Congress. “(Stevenson) and his whole camp, as well as every crook and Communist in Washington, knows that if I am chairman of that (investigating) committee and Republicans control the other committees, then we will have to power to help Dwight Eisenhower scrub and flush and wash clean the foul mess of corruption and communism in Washington. We must have a Republican administration — President, Vice President, Senate and House — if we are to have a real housecleaning which this nation must have if it is to survive.”