Dec 8: CBS President Louis G. Cowan is fired as a result of the quiz show scandal. Cowan became President after the success of a quiz show he created, The $64,000 Question, which was also caught up in the scandal. 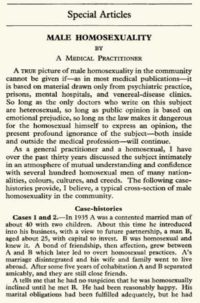 Dec 12: A gay doctor tells British doctors about gay people. Efforts in Britain to repeal its “Gross Indecency” statute are stalled. But public debate continues over the 1957 Wolfenden Report recommendation to repeal the law criminalizing gay male relationships. Participating in the debate by gay men is limited, mainly because they could still be convicted and sentenced to up to two years at hard labor. One gay doctor writes a fascinating paper about gay men for the medical journal The Lancet. Instead of providing clinical data or engaging in medical mumbo-jumbo, this anonymous doctor provides sixteen case studies — brief biographical sketches, actually — which present a fascinating glimpse into the hidden lives of these gay men.

Dec 15: John L. Lewis announces his retirement as President of the United Mine Workers of America after forty years at the helm.

Dec 22: Ann Arbor Police arrest 25 in “homosexual crackdown.” The arrests supposedly cap a seven-week city-wide investigation, but all of the arrests take place on the campus of the University of Michigan. Those arrested will be sentenced to ten days in jail, five years’ probation, and $275 in fines and court costs (about $2,350 today). About half are students; they will be suspended and told not to return until they seek counseling and can be considered “good social risks.” One man will commit suicide on March 13, two days before he is due in court for sentencing. The arrests inspire an interesting round of reactions in the campus newspaper, the Michigan Daily.

Dec 22: The film Suddenly Last Summer, staring Elizabeth Taylor, Katharine Hepburn and Montgomery Clift, is released. The film is based on a 1958 play by Tennessee Williams, with the screenplay by Gore Vidal.

Dec 24: American producer, director and writer Lee Daniels is born in Philadelphia, PA. He will be best known for producing Monster’s Ball and directing Precious.

Dec 29: President Dwight D. Eisenhower announces that he will not renew the voluntary moratorium on nuclear testing, which is set to expire on December 31.