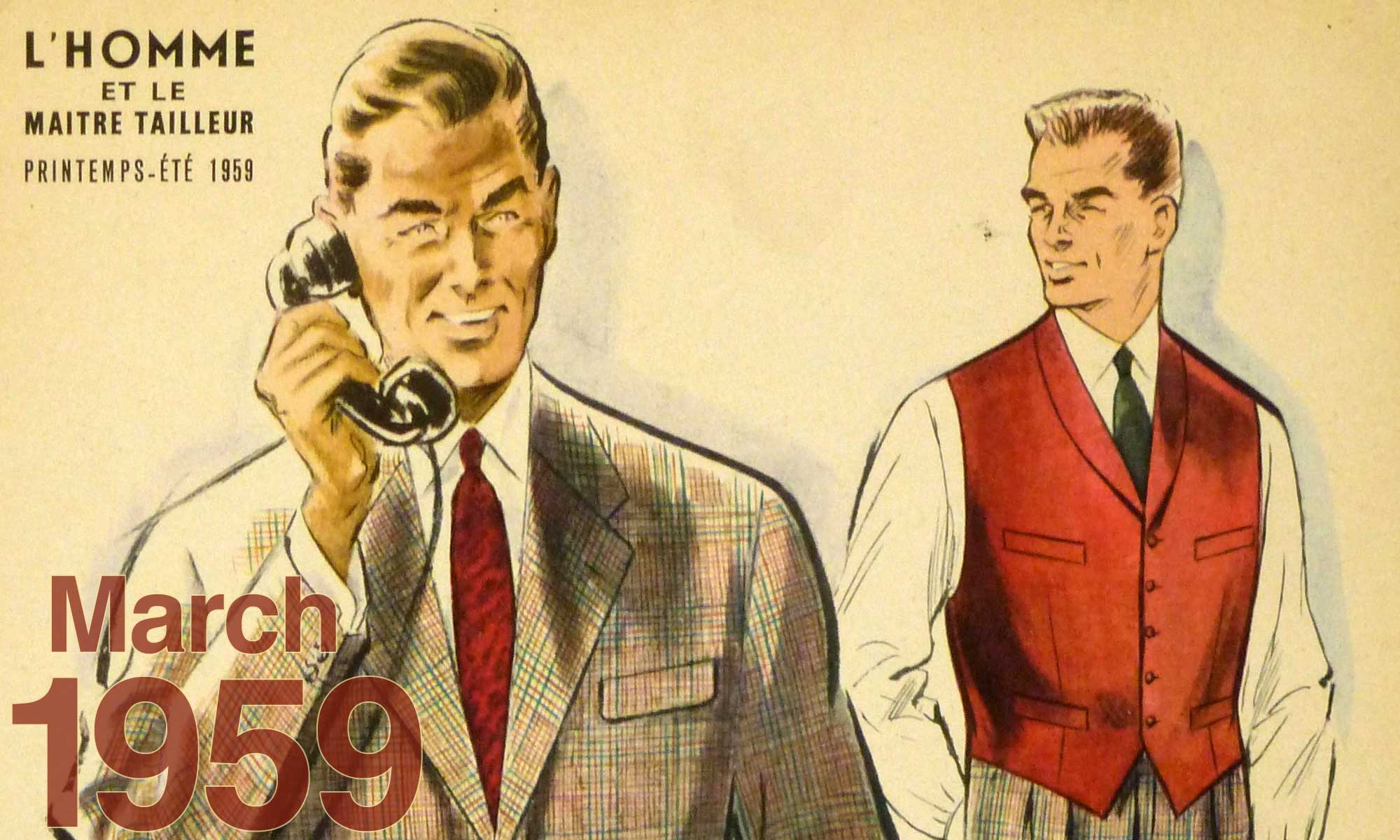 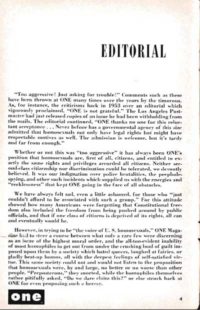 March: ONE magazine asks, “When will homosexuals stop pitying themselves?” Unlike the leadership of the Mattachine Society under Hal Call, The editors and writers for ONE often staked out forward-leaning positions in the pages of the magazine. Some feared that ONE was too aggressive and was just asking for trouble. ONE’s board chairman Dorr Legg (who went by the name of William Lambert), pushed back in an editorial: “Whether or not this was ‘too aggressive’ it has always been ONE’s position that homosexuals are, first of all, citizens, and entitled to exactly the same rights and privileges accorded all citizens. Neither second-class citizenship nor discrimination could be tolerated, we devoutly believed. It was our indignation over police brutalities, the peephole spying, and other such incidents which supplied us with the energies and ‘recklessness’ that kept ONE going in the face of all obstacles. … When are American homosexuals going to stop sitting around pitying themselves, excusing themselves, hiding their faces and bemoaning their lot? When are they going to roll up their sleeves and do some of the hard work and the fighting that any segment of society must do to defend its own rights.”

Mar 6: The Federal Reserve Board raises the discount rate from 2½ to 3% in an effort to decrease the prospects of rising inflation. The move comes as a surprise, with inflation remaining low and some 4.7 million people still out of work in the aftermath of the worst recession since World War II.

Mar 9: Frankie Avalon’s single “Venus” begins its five week run at the top of the charts.

Mar 10: A rebellion breaks out in Tibet as 30,000 Tibetans surround the Dalai Lama’s palace, the Norbulingka, to prevent his arrest by the Chinese government.

Mar 11: Lorraine Hansberry’s play A Raisin In the Sun opens on Broadway at the Ethel Barrymore Theatre.

Mar 18: Village Voice publishes “Revolt of the Homosexual.” Beat writer Seymour Krim’s fanciful interview with a homosexual appears in the Voice as part of the paper’s “The Press of Freedom” series. The interview between Straight Guy and Homosexual starts with the opening question: “Why have so many fairies come out in the open recently? Wherever I go I run into them—the Village, East Side, Harlem, even the Bronx.” The Homosexual answers, “We no longer have the energy to hide. You can’t know the strain on a person in always pretending.” The piece carries a decidedly pro-gay approach, with Homosexual saying, “Homosexuals have submitted too weakly until now to judgments from above… From 4 to 7 million American adults — at least — are not going to be treated like criminals or freaks because we are no longer going to accept your evaluation of us. Baby, remember my words!”

Mar 28: The People’s Republic of China abolishes the government of Tibet under the Dalai Lama. China installs a puppet government under the Panchen Lama.

Mar 29: The film Some Like It Hot, starring Marilyn Monroe, Tony Curtis and Jack Lemmon, is released.

Mar 30: The Dalai Lama flees Lhasa in Tibet and finds sanctuary in India.