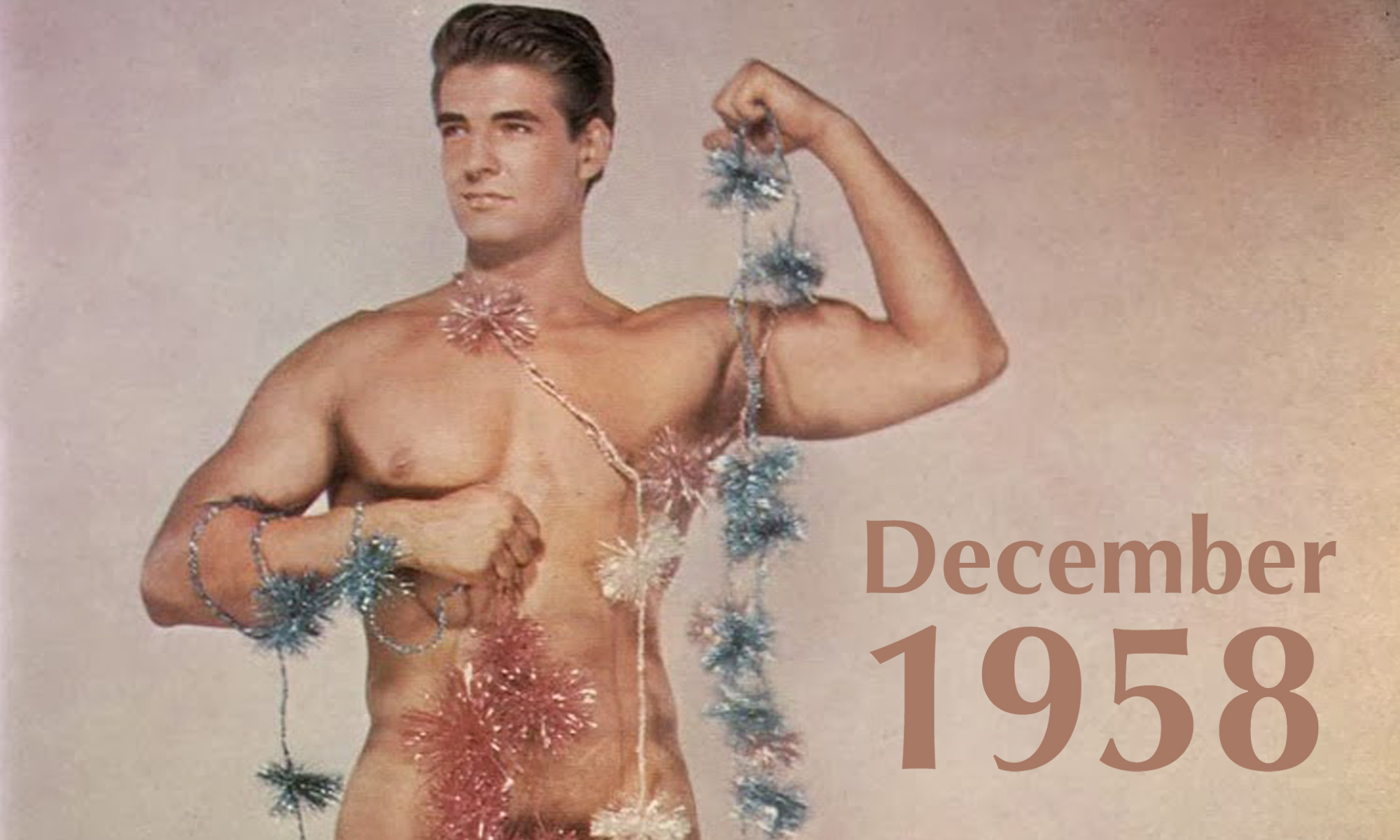 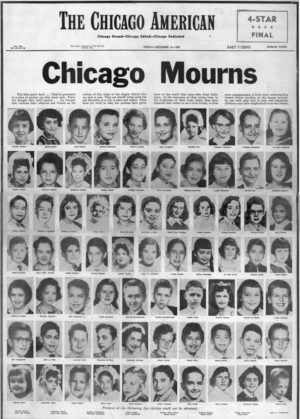 Dec 1: Ninety-two students and three nuns are killed in a fire at Our Lady of the Angels School in Chicago. About 1,635 students are in the building when the fire breaks out just eighteen minutes before the closing bell. Some children jump from the windows to escape the flames. The school building has passed all of its fire safety inspections, most recently in October, but a grandfather clause in the city’s fire codes exempts the building meeting the latest safety requirements. Consequently, it has no fire alarm linked to the fire station, nor does it have any automatic alarms, fire doors or sprinklers. Decades of petroleum-based wax and varnish covers its floors, doors,  and other wooden surfaces.  The cause of the fire will never be definitively known. The fire makes national headlines and will lead to improved fire safety measures in schools. Some 16,500 older school buildings in the United States will be brought up to code within one year of the disaster.

Dec 5: Alabama Circuit Judge George Wallace of Clayton refuses to obey a subpoena from the U.S. Civil Rights Commission for voter registration records as part its  an investigation into complaints by African-Americans  that they have been deprive of their right to vote. Wallace threatens to jail any federal agent who tries to take the impounded files out of his custody.

Dec 6: Three moderate candidates opposed by Arkansas Gov. Orval E. Faubus win election to the Little Rock School Board. The upset wins are seen as a rebuke of Faubus’s bitter-end desegregation policies Faubus had denounced the three as running under “the integration slate.”  Three segregationists, one of whom had no opposition, also were elected. One of the three winners was a former publicist who worked on Faubus’s 1956 gubernatorial campaign. With the board evenly deadlocked between segregationist and moderate members, the city’s high schools will remain closed. 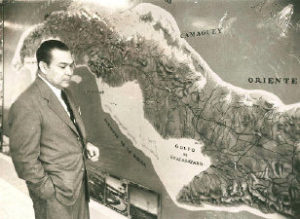 Dec 7: With attacks by Cuban rebels under Fidel Castro taking place in four of the six provinces, President Fulgencio Batista asks the Congress to declare a state of national emergency. This gives the President unlimited dictatorial powers. Meanwhile, the government renews the suspension of all constitutional guarantees throughout the country for another forty-five days. Constitutional guarantees have been suspended since December 1956 when Fidel Castro’s rebellion began in Oriente Province. 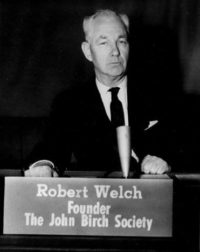 Dec 17: President Eisenhower orders a substantial cut in funding to develop a nuclear-powered airplane. $700 million ($6 billion today) has been spent on its development so far. 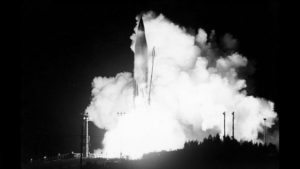 Dec 18: The U.S. military launches an Atlas ICBM into space and successfully places it in orbit around the earth. In addition to testing several military objectives, the rocket is carrying experimental radio equipment designed to receive signals from earth and re-transmit them to other ground stations. This makes it the first primitive communications satellite. It is dubbed “the Talking Atlas.” It is intended to stay in orbit for about twenty days before returning to earth.

Dec 19: The Atlas rocket orbiting the earth delivers the first satellite-relayed message in history: “This is the President of the United States speaking. Through the marvels of scientific advance, my voice is coming to you from a satellite circling in outer space. My message is a simple one: Through this unique means I convey to you and to all mankind, America’s wish for peace on Earth and goodwill toward men everywhere.”

Dec 21: Gen. Charles de Gaulle is elected President of France with 79% of the vote.

Dec 22: The Chipmunks’ single “The Chipmunk Song” begins its four week run at the top of the charts.

Dec 25: Queen Elizabeth II, in her annual Christmas message, urges Britons to extend “friendship and good-will” toward immigrants from other parts of the Commonwealth. The message comes at the end of a year that has seen the first race riots in the country’s history.

Dec 27: Cuban Army planes bomb and strafe rebel held-positions in eastern Las Villas Province where rebels say they have taken eighteen towns. A Cuban Air Force pilot flies his B26 bomber to Miami because “I don’t like to bomb cities and kill innocent women and children.” Sabotage of rail lines have greatly hampered the government’s ability to move troops into eastern Cuba. Reports emerge from Havana that President Fulgencio Batista has ordered a shake-up of the joint staff of the armed forces.

Dec 27: The film Auntie Mame is released. It will become the top grossing film of 1959.

Dec 28: Cuba’s rebels announce that they will “very soon” establish a provisional government in “free Cuban territory.” Rebel radio says that four columns are now advancing on Santiago de Cuba, the island’s second largest city, which has been surrounded for a week. 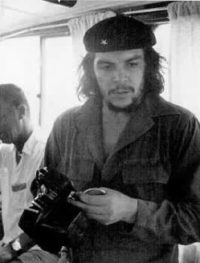 Dec 29: Cuban rebels under the command of Che Guevara begin the battle for Santa Clara, Cuba’s fifth-largest city. Its capture would cut the off the government from the rich southeast sugar provinces. Rebels say they now control 80% of Las Villas Province. 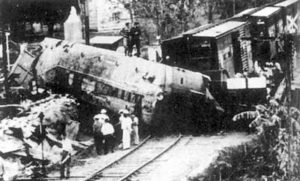 Dec 31: The State Department notifies the Senate that it regards the Batista regime’s position as grave due to dangerous defections in the Cuban army and rising popular opposition to the government. The Senate is told that if the rebels capture Santa Clara, the Batista government will probably collapse. The Batista government claims that it has forced rebel forces to withdraw from Santa Clara, but independent sources say the report is false. Rebels  continue to attack convoys attempting to reinforce government troops in the city. Rebels also derail an armored train and capture 300 soldiers and two railway cars loaded with arms, ammunition and dynamite. A small plane drops leaflets over Havana urging the public to stay indoors and not attend New Years celebrations. Police draw their pistols and prevent people on the streets from picking up the leaflets.