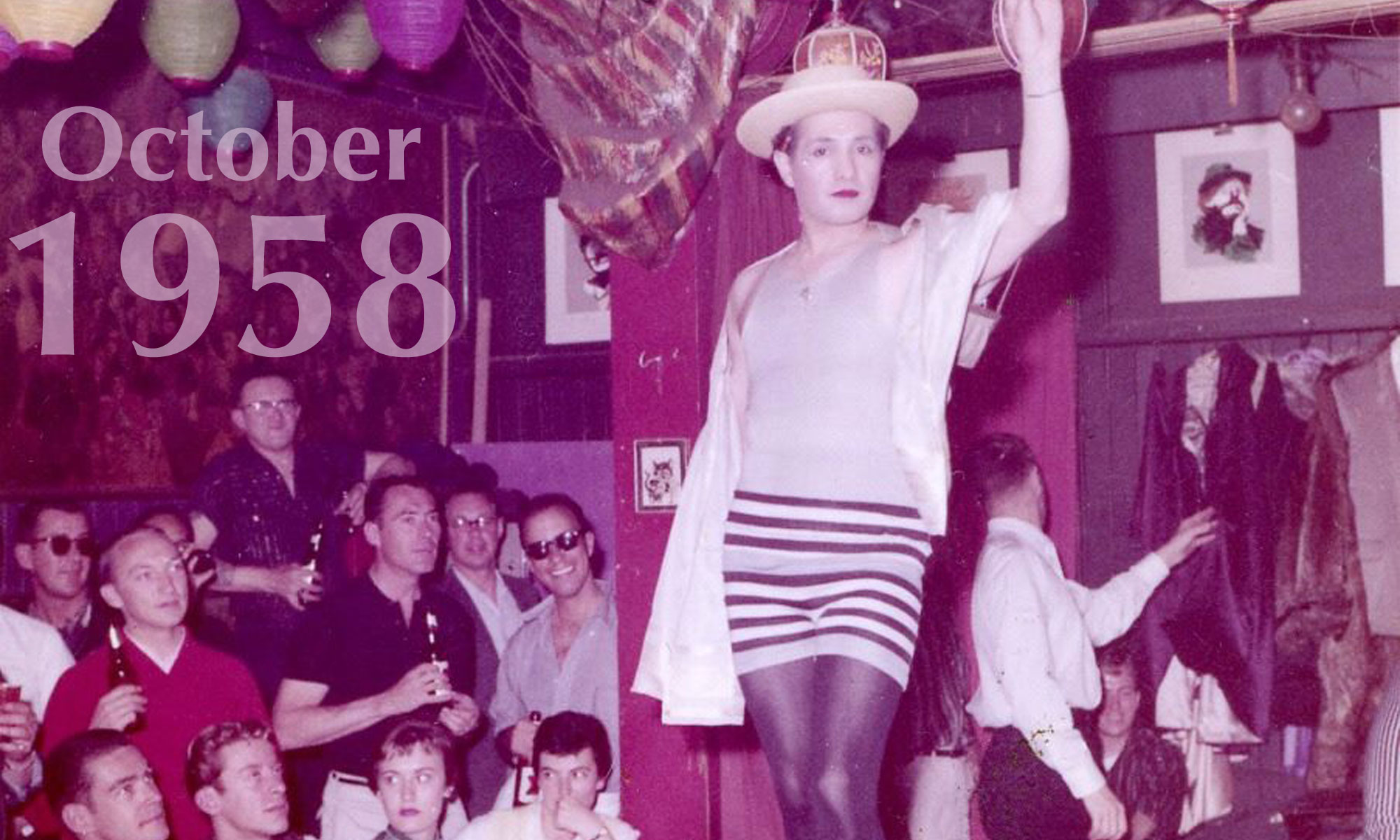 Oct 1: The Vatican announces that Pope Pius XII is suffering from a “slight indisposition.” The 82-year-old pontiff will curtail his heavy working schedule so he can rest.

Oct 2: Pope Pius XII appears to have recovered from this “slight indisposition.” The New York Times reports that he looks “remarkably well” and has resumed his normal schedule. The Times is in Italy to cover a visit by 607 New Yorkers led by Cardinal Spellman. They were expected to receive an audience from the Pope. He will meet with the group on October 3. The Times will report that he “looked somewhat tired, but his voice was steady and clear and he moved briskly.” According to the Times, his “indisposition” was an attack of the hiccups. 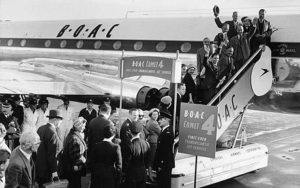 Oct 4: BOAC becomes the first airline to fly regularly-schediled passenger jets across the Atlantic when it begins service with its new de Havilland Comet jets. Two jets cross the Atlantic, one leaving New York’s Idlewild airport for London, and one Heathrow Airport for Idlewild. The new jet service cuts travel time in half from the 11½ hours required for propeller aircraft, although the London-to-New York route requires a refueling stop in Gander, Newfoundland, due to prevailing headwinds. Fares are $435 one-way ($3,800 today) or $783 round trip ($6,800 today).

Oct 4: Pope Pius XII warns plastic surgeons that it is morally wrong to operate on a person who asks for surgery “only to satisfy vanity or the caprice of fashion.” He acknowledges its usefulness in cases of disfigurement, but warns against surgery to enhance a person’s “power of seduction, thus leading others more easily into sin.” 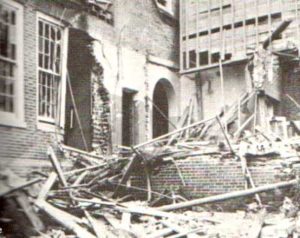 Oct 5: Three bombs destroy most of Clinton High School in Tennessee. This is the first sign of major trouble in the past two years. Violence broke out in 1956 when the school was first integrated.

Oct 5: The New York Times reports that Pope Pius XII still has recurring hiccups. “Though the improvement was clear, it is also clear that the Pope is not yet well. He looked tired and worn. His face was more hollow-cheeked than usual and he seemed to have lost some of the weight that he put on after his serious illness of a little less than four years ago.

Oct 6: Pope Pius XII suffers a stroke. According a Vatican official, the 82-year-old pontiff is unable to speak or swallow. Vatican Radio begins broadcasting regular medical bulletins several languages throughout the day. Shortly before noon, a Vatican official asks the faithful “for fervent prayers.”  Rome is rife with speculation about who might be the next Pope. By the end of the day, Vatican Radio reports that his condition has “noticeably improved as far as the circulatory disturbances of the brain are concerned.”

Oct 7: Vatican radio reports that Pope Pius continues to improve. “Hiccups reappeared yesterday evening, but disappeared this morning. … His Holiness was able to take food.” According to medical reports, he can swallow, speak, and move his limbs.

Oct 8: Arkansas Gov. Orval Faubus launches a national campaign appealing for contributions to the Little Rock Private School Corporation, which will hold classes for white students in donated buildings. The mass mailing includes a letter written and signed by Faubus and displays the official seal of the state. Faubus urges recipients to join “this struggle to preserve constitutional rights, not only for the citizens of Little Rock, but also for all the nation… (Contributions) will be beneficial to us and to all freedom-loving citizens of this nation.”  He also asks recipients to “run this letter as an advertisement in your local newspaper.” 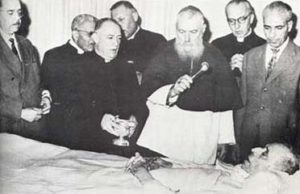 Oct 11: The Air Force launches a second Pioneer orbiter with the goal of orbiting the moon. However, it fails to achieve lunar orbit due to a partial failure of the Thor rocket’s third stage. The orbiter instead travels about 79,000 away from earth, which places it about a third of the way to the moon and thirty times farther from earth than any other man-made object. Instruments on board send back more data about the Earth’s magnetic field and the Van Allan Radiation Belt before the Earth’s gravity pulls the orbiter back into the atmosphere. It burns up and disintegrates somewhere over the South Pacific about 43 hours after its launch. Because it is the first Pioneer to survive the launch, it will be named Pioneer I. 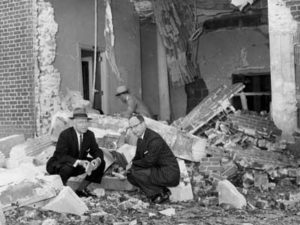 Oct 12: A bomb explodes at the Hebrew Benevolent Congregation Temple on Atlanta’s Peachtree Street. The Reform Jewish temple is heavily damaged in the 3:30 a.m. blast in which no one is hurt. Jacob Rothschild’s the temple’s rabbi since 1946 and a personal friend of Rev. Martin Luther King, Jr., has been a longstanding and highly visible civil rights activist. The Atlanta Constitution’s Ralph McGill pens a Pulitzer Prize-winning editorial the next day: “It is the harvest of defiance of courts and the encouragement of citizens to defy law on the part of many southern politicians. It is not possible to preach lawlessness and restrict it. To be sure, none said go bomb a Jewish temple or a school. But, let it be understood that when leadership in high places in any degree fails to support constituted authority, it opens the gates to all those who wish to take the law into their hands.”

Oct 15: Massachusetts scales back its sexual psychopath law. Massachusetts’ sodomy law allowed for imprisonment of up to 20 years upon conviction, but under its sexual psychopath law, a judge could decide to hold an individual indefinitely — for life, even — in a mental institution under certain circumstances. Bowing to criticism over the sweeping nature of the law, the legislature acted to revise it to limit its applicability to sexual acts involving people under the age of 16, thus removing the threat of lifetime commitment for adults engaging in consensual sexual activity. 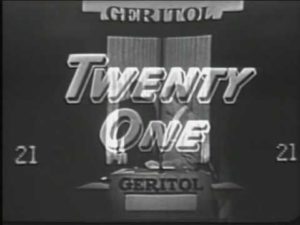 Oct 16: NBC announces that the sponsor of the popular quiz show Twenty-One has cancelled the program. A spokesman for the program’s sponsor, Pharmaceuticals, Inc., blames the cancellation on “a decline in ratings,” but admits that a grand jury investigation into quiz show cheating “had something to do with the decline.” The announcement comes just a few hours after the last episode airs.

Oct 17: One of the five suspects arrested in the October 12 Atlanta temple bombing has been released. The other four who were arrested — Wallace Allen, George Bright, Kenneth Chester Griffin and Robert A. Bolling — are indicted on a capital charge of bombing the temple. The grand jury also indicts Bolling’s brother, Richard Bolling, who is being sought by police. He will be arrested the next day. Bright is accused of being the mastermind of the bombing. His December trial will end in a hung jury, and his January retrial will end in acquittal.  The charges will be dropped against the other defendants, and no one will be held accountable for the bombing. 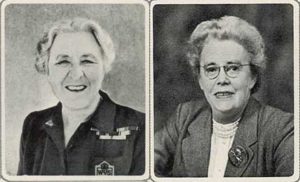 Oct 21: The Baronesses Swanborough (Stella Isaacs, Marchioness of Reading) and Wootton (Barbara Wootton, Baroness Wootton of Abinger) are the first women to take their seats in Britain’s House of Lords after the passage of the Life Peerages Act 1958, which received Royal Consent in April.

Oct 23: The Federal Reserve increases the discount rate from 2% to 2½% as a guard against inflation. The discount rate is the interest rate the Fed charges member banks for short term loans to cover reserve requirements. This action brings the discount rate nearly half-way back from the 1¾% low set in April and the post-war peak of 3½% set in 1957 just as the recession was getting underway.

Oct 25: Fifty-one Cardinals of the Roman Catholic Church enter into conclave to elect a new Pope. One Cardinal, Edward Mooney of Detroit, dies of a heart attack less than an hour before the conclave is set to start. 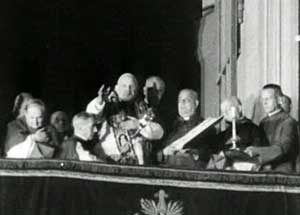 Oct 28: Angelo Guiseppe Cardinal Roncalli, Patriarch of Venice, is named to the Papacy on the eleventh ballot as the conclave is about to ends its third day. He takes the name of John XXIII, the first Pope to use the name John since 1334.

Oct 31: After a series of atmospheric atomic tests by all three powers, the U.S., U.S.S.R., and Great Britain agree to a temporary moratorium on nuclear testing. The moratorium will last for another three years until negotiations for a more permanent treaty break down.